No one likes spending Christmas at work — but sometimes there's just no getting out of it. For example, if you are stationed in orbit 250 miles above the planet.

But despite being as far away as it's humanly possible to get from Earth — where Christmas was invented — astronauts aboard the International Space Station manage to keep their workplace pretty festive. They festoon the station with decorations, put up Christmas trees, open presents, and even get Christmas dinner.

The crew currently aboard the ISS shared a holiday video with the world on December 22. The astronauts, four of whom arrived in November aboard the SpaceX spacecraft "Resilience," said they'd named the craft after the people who helped get them up there in a year of unprecedented challenges.

"There couldn't be a more fitting name to describe 2020, the resilience of the human spirit is something we can truly celebrate in this special season," NASA astronaut Victor Glover said.

Here are some amazing moments from the many Christmases which have been celebrated aboard the ISS.

Of course to have a real Christmas you need a Christmas tree. 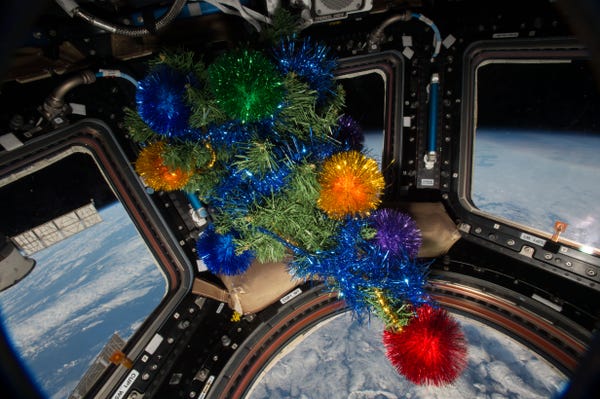 Astronauts may not be able to pick their own real fir tree, but for years they've been bringing up fake ones and adorning them with tinsel and decorations.

Over the decades astronauts have sometimes had to improvise. 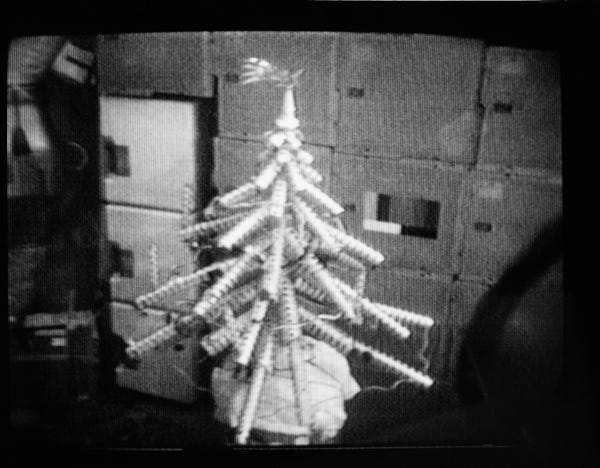 This Christmas tree is fashioned from empty food containers, and was made by three astronauts aboard the ISS on the Skylab 4 mission in 1973.

For years astronauts have been decorating Christmas cookies in zero-gravity. 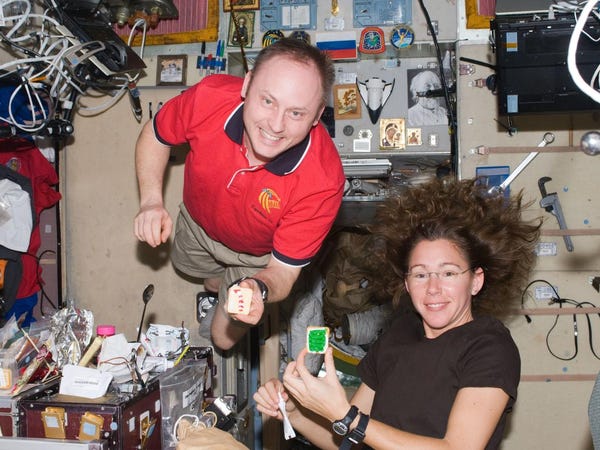 In November this year a specially designed "space oven" was shipped to the astronauts on the ISS to experiment on the impact intense heat and zero-gravity would have on baking cookies, however NASA confirmed that the astronauts will only be baking five experimental cookies in this oven and will not eat them.

The astronauts get Christmas dinner. 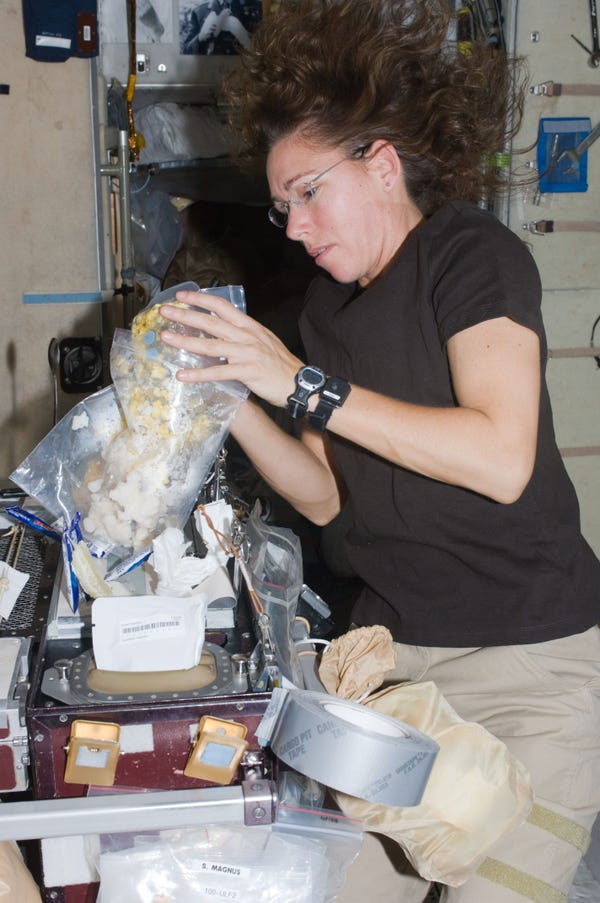 It's impossible to prepare a full roast meal on the ISS, but astronauts still get an approximation of a Christmas dinner.

This feast was shipped up to the astronauts a few weeks ahead of Christmas aboard a SpaceX Dragon spacecraft.

A NASA spokesperson sent Business Insider a list of what's on the menu for the ISS crew this Christmas. 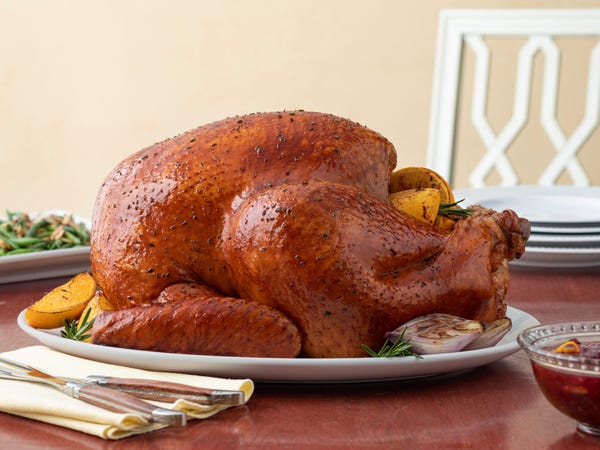 The main course for the astronauts' Christmas meal includes:

The astronauts' Christmas meal was shipped up to them aboard the SpaceX CRS-21 spacecraft on December 6 (along with some meteorite samples and live mice).

Last year the astronauts were sent gingerbread men, some of which ended up floating around in zero gravity. 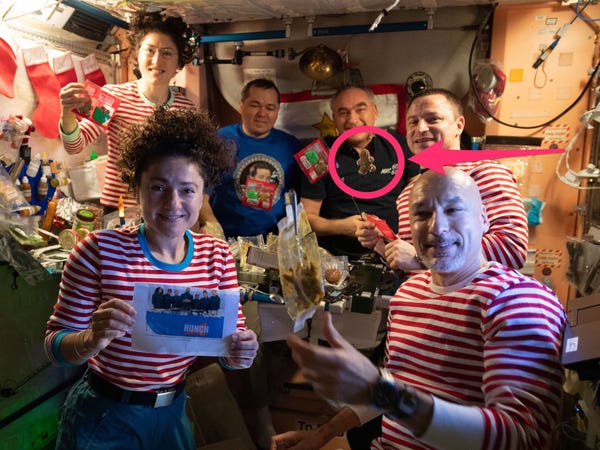 Stockings have also become a regular feature — although the lack of gravity means they don't necessarily hang the way they usually do. 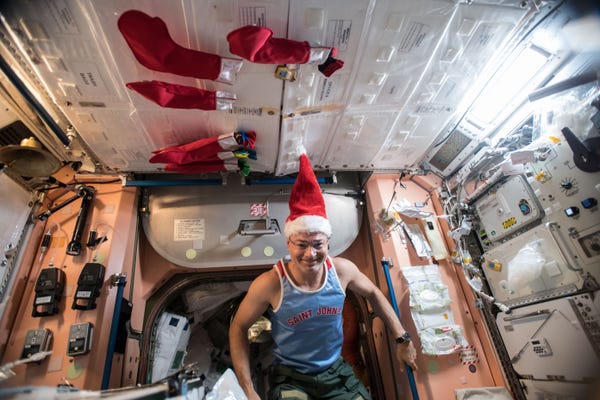 On Christmas morning astronauts emerge from their sleeping quarters to find their stockings and presents just like on Earth. 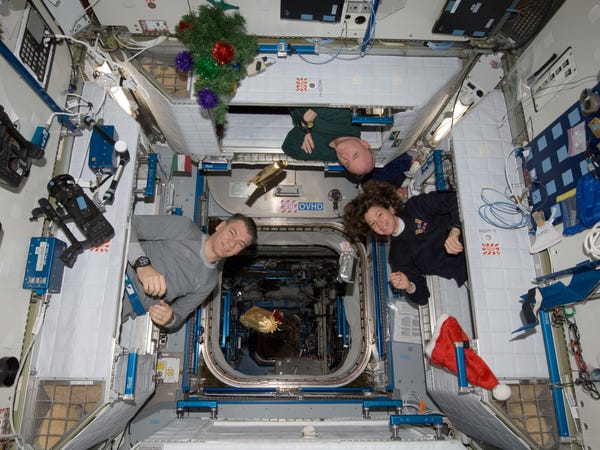 Presents from the astronauts' families are shipped up to the ISS ahead of Christmas day. Their families have to be organized, sometimes sending presents up as early as November to coincide with cargo ships travelling to the station with new supplies and science experiments.

This year's batch of Christmas presents and food was brought up by another SpaceX Dragon ship on December 8.

It's not just their families that give them gifts — the astronauts also get presents for each other.

In 2014 US astronaut Terry Virts tweeted that he'd got a harmonica from Russian cosmonaut Elena Sorova.

Santa Claus hats are another staple, as exemplified in this photo of astronaut Scott Kelly (2010). 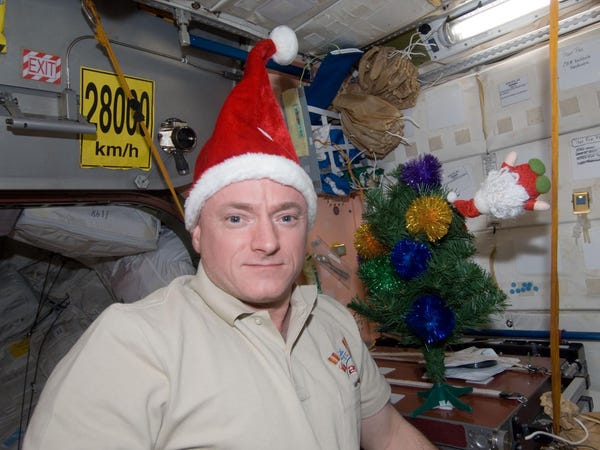 This picture from Christmas 2011 shows that elf hats are also permitted. 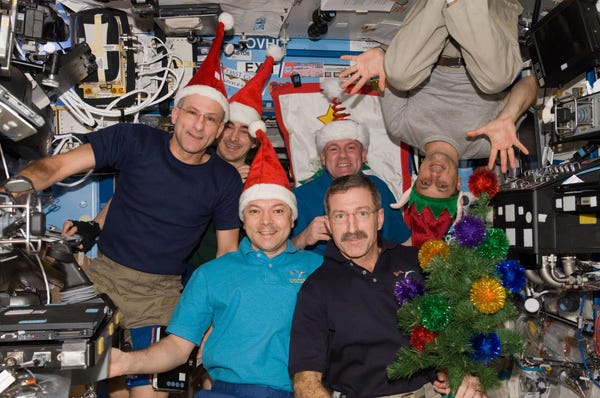 And of course decorations are a must, as proven by this photo taken in the run-up to Christmas aboard the Russian segment of the ISS in 2012. 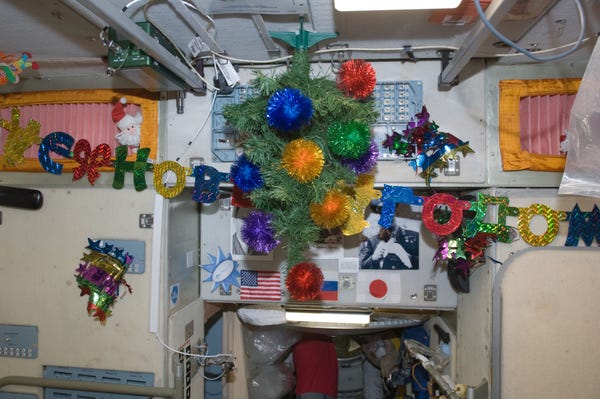 The decorations can get pretty space-specific. 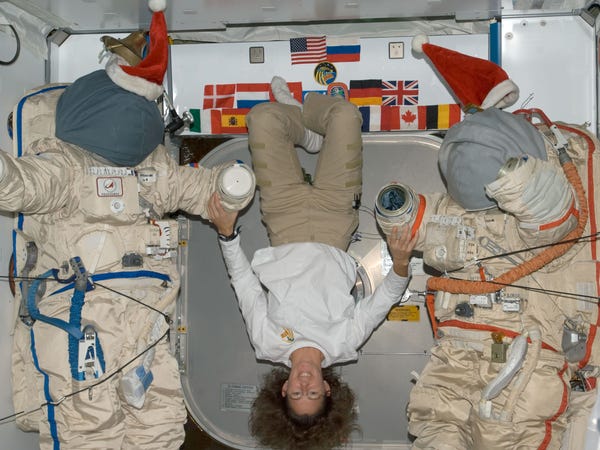 Stuffing empty space suits and putting hats on them appears to have caught on, in 2014 US astronaut astronaut Terry Virts shared this picture. 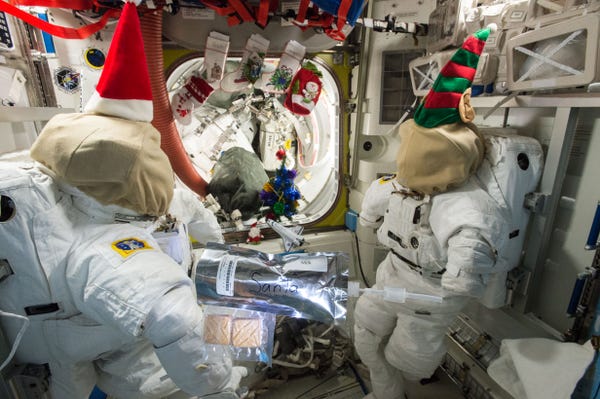 Virts and his team also left some "powdered milk and freeze dried cookies" for Santa according to ABC — although without a chimney, they had to settle for leaving them by the airlock.

Canadian astronaut Chris Hadfield is famous for his orbital musical renditions, and Christmas is no exception. 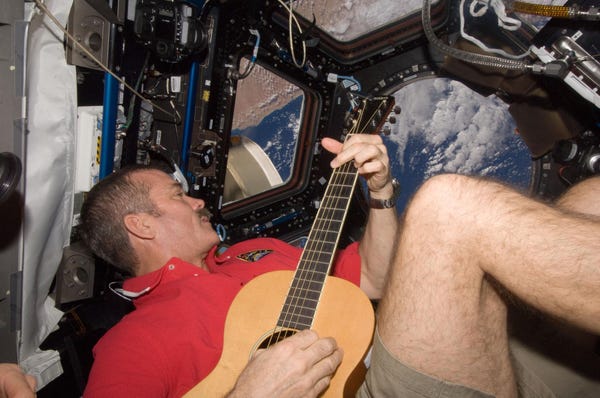 This photo was taken on Christmas day 2012, and according to NASA Hadfield later joined the rest of the crew for an "assortment of Christmas carols."

Sometimes astronauts get the day off, but not always.

In 2018 two out of the three crew members got the whole day off, while a third had to carry out a few odd jobs. "The only tasks on their schedule for Xmas besides meals and exercise are some blood and saliva sample draws for human research studies," a spokesperson told Space.com.

Sometimes the astronauts have more serious Christmas duties to attend to. On Christmas Eve 2013 NASA astronauts Mike Hopkins and Rick Mastracchio ventured outside the ISS on a space walk to fix a broken cooling system.

This year NASA confirmed to Business Insider the astronauts onboard will get to take Christmas day off work.

Even though the ISS might lack a few home comforts, being in space is a pretty unique way to spend the holiday.

Astronaut Anne McClain shared what it feels like to look down on the Earth at Christmas time during her stay on the station in 2018.

And in 2014 Terry Virts tweeted a video of what he called the ISS' version of Christmas lights.