By Zoe Samios and Lisa Visentin

Executives from Sky News Australia received the kind of phone call last Thursday that no media operator wants to get. YouTube’s Australian director of partnerships, Ed Miles, informed the 24-hour news channel that its account on the Google-owned video sharing site had been suspended for one week.

YouTube has become a significant distribution platform for Sky News, both inside in Australia and around the world. Sky is now so adept at harnessing the power of the video site and social media platform Facebook that its local presenters have gained significant traction in conservative circles offshore.

But a clip from May 3 of one of those presenters, controversial broadcaster Alan Jones, had breached YouTube’s COVID-19 misinformation guidelines. And since Sky had already received a warning from YouTube last December, it meant the Rupert Murdoch-owned broadcaster could not upload videos to the platform for seven days. 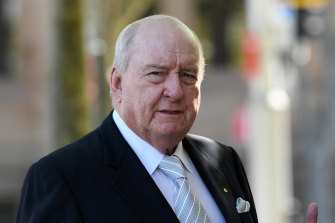 A Sky News clip of Alan Jones that spoke about the spread of the latest strain of coronavirus in India caused the strike that led to a suspension. Credit:Bianca De Marchi

In the video, Jones claimed that COVID-19 was not by definition a pandemic due the number of deaths globally and that the death toll in India was not as bad as what the news had made out. The WHO designated COVID-19 a pandemic in March last year.

“We seem to have redefined the word pandemic,” Jones thunders in the video. “It seems to be now about the number of cases that keep being recited to us in alarming language everyday. Many members of our Indian family are in India, because they had exemptions to attend a family funeral, or a wedding or a birth.” Those claims were rejected by his interviewee, Burnet Institute epidemiologist Professor Mike Toole.

Sky News has cultivated a large audience on YouTube – it has 1.9 million subscribers to its channel and its videos receive an average of 2.3 million views a day. This is part of a deliberate strategy by the broadcaster to make money – it splits revenue with YouTube from ads that appear before and during its clips and also from a content supply deal with the platform. 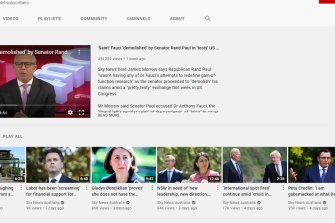 The way Sky has achieved this – by courting conspiracy theories and through incendiary commentary – has sparked concerns it is emulating Murdoch’s American channel Fox News. Fox News has been criticised for similar reasons and has faced its own backlash in the US over its approach to the pandemic in recent weeks.

At the same time, the Sky suspension by YouTube has reignited concerns within News Corp about the sheer power and unaccountable nature of global digital platforms and their sway over traditional media. While it comes to terms with the reaction of YouTube, News Corp detractors – such as former Prime Minister Kevin Rudd – say it has no right to complain, given the large media footprint it controls in Australia and offshore, through titles such as The Australian, The Daily Telegraph and The New York Post.

Sky’s night time hosts including Sharri Markson, Andrew Bolt and digital editor Jack Houghton have sized on the suspension as an assault on free speech. Meanwhile, controversial Fox News host Tucker Carlson said Australia had turned into a “COVID dictatorship” where you can’t ask basic questions without getting censored. But while the Sky suspension has given presenters fresh ammunition in the media culture wars, it has also surprised and frustrated senior executives in the News Corp and Sky stables, who had not been alerted to any issues of breaches since last December.

In the world of media regulation, YouTube’s process could be considered unorthodox. When the Australian Communications and Media Authority, for example, receives a complaint about a broadcaster it conducts a thorough investigation. If there is a breach, it provides a detailed report with the reasons for it.

People close to YouTube’s decision to ban Sky News, who spoke on the condition of anonymity, said the tech giant has not given written confirmation of the ban to the broadcaster. The sources, who were unauthorised to speak publicly, also said Sky News has not been provided with specific reasons why the clip caused the suspension.

The last time Sky News was contacted about a specific breach of guidelines was in December, when it was notified that two of its videos were taken down for contravening YouTube’s COVID-19 misinformation policy. The decision prompted a close review of Sky News content by its executives and a renewed attempt to comply with the updated guidelines and avoid further issues.

For their part, the executives took it so seriously that they asked YouTube in December if any other clips had contravened guidelines. They did not receive a response.

YouTube frequently updates its COVID-19 misinformation guidelines and takes down posts that do not meet those guidelines. When the reviewers look at a flagged video, they consider the content and the intention of the uploader. Suspension of an account – or a “strike” – only takes place if someone has violated the policy and already received a warning. In the case of Sky News, that warning was given in December.

When YouTube informed Sky News of its strike, it also said it had removed 14 videos which were aired before discussions took place between the two organisations in December. YouTube only removes historical content in breach of the latest guidelines if it is made aware of a video through its artificial intelligence technology or via a user. YouTube would not clarify when it made its latest updates to its misinformation guidelines.

But despite best efforts, YouTube – which has over 2 billion monthly registered users – has often struggled to remove misinformation, disinformation, dangerous or violent content from its platform.

A report from The New Zealand Royal Commission in 2020 said that Australian terrorist Brendan Tarrant – who killed 51 people in two Christchurch mosques in 2019 – was radicalised by YouTube. Videos of the massacre also uploaded to YouTube in the hours after it happened. YouTube has also been forced to introduce strict guidelines in the last 18 months to manage the fast spread of misinformation about COVID-19 on its website.

And in another example of how difficult it is to manage that misinformation – the video that caused Sky News’ suspension is still available on another YouTube account.

For his part, Jones has issued two corrections to comments he made on Sky last week. One clarification was related to his stance on vaccinations and the other was related to misinformation he presented with renegade federal MP Craig Kelly about COVID-19, vaccination safety and the Delta strain. The video that caused Sky’s suspension from YouTube not included or discussed in either on-air correction.

Who or what specifically alerted YouTube to the video of Jones that triggered the suspension, which was uploaded in early May, is unknown. It could have been machine learning technology or a user who alerted the system, which led to a manual review by YouTube’s team. But inside News Corp, suspicion is running rampant among executives that former Prime Minister Kevin Rudd is behind the complaint. It is considered a direct attack on a division that is makes money through its relationship YouTube.

But this accusation was strongly rejected by Mr Rudd on Wednesday.

“I did not flag Murdoch’s pandemic disinformation with YouTube, but it is wholly unsurprising that members of the public would have, given how sharply Australians have turned against Murdoch,” Mr Rudd said in a statement. But he acknowledged he had written to YouTube twice in recent months to complain that Sky News was “breeding far-right extremism in Australia”.

In a May 27 letter to Google’s acting managing director, Caroline Rainsford, Mr Rudd raised concerns about the comments beneath a Sky News video of a news report about a UK Black Lives Matter activist being shot in the head. The more than 7,000 comments, Mr Rudd said, were dominated by “expressions of elation” about the shooting and was an example of how Sky News was using YouTube to fuel the “far-right echo chamber”.

The letter, which was also addressed to News Corp executive chairman Michael Miller, asked whether YouTube had plans to review an agreement to distribute Sky content via YouTube.

“Media proprietors such as YouTube and Sky News Australia have a responsibility not to promote extremism merely because it is profitable to do so,” he wrote in the letter, which has been seen by the Herald and The Age.

It prompted discussions between News Corp executives and YouTube about ways to moderate and manage comments on the platform. A vocal critic of News Corp, Mr Rudd behind the petition for a royal commission into the company which has gained more than 500,000 signatures. It also led to a media diversity Senate inquiry, spearheaded by Greens Senator Sarah Hanson-Young.

A day after news of the ban broke on Sunday, Mr Rudd posted a two and a half minute video on his Twitter saying Sky News had been “caught red-handed putting out lies and disinformation about the link between COVID-19 virus and the pandemic” and for promoting “quack medicines”.

He has since posted repeatedly about the matter.

A tweet by Ms Hanson-Young on Monday questioned the media watchdog’s involvement in regulating Sky content. The ACMA contacted Sky News shortly afterwards, for the first time in an extended period, to ask about whether the content that was pulled from YouTube had aired in regional areas. Whether the media watchdog pursues this remains to be seen.

Sky News will be able to upload videos again as early as Friday, but the decision has cast a light into the way traditional media can be regulated by tech giants in Australia. Whatever happens from here, the Sky ban is the latest in a long running list of flare-ups between publishers and platforms. It’s unlikely to be the last.