The Walton family fortune fell by $US11.4 billion ($16.4 billion) after Walmart slashed its earnings outlook for the second time this year.

Shares of the retailer, which is controlled by the family, tumbled by 7.6 per cent in New York trading after it said adjusted earnings per share will decline as much as 13 per cent this year with US shoppers reining in spending on big-ticket items amid soaring consumer prices. Shares closed 7.6 per cent lower. Two months ago, the company said earnings per share would only dip about 1 per cent, while in February, it had predicted a modest increase. 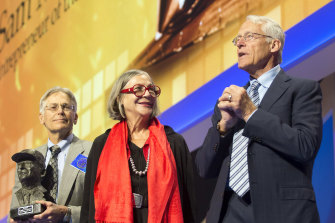 Jim, Alice and Rob Walton are the children of the family’s late patriarch, Sam Walton.Credit:AP

The news rattled Wall Street across the board, the warning the latest sign that inflation is hurting American consumers’ spending power.

The family’s late patriarch, Sam Walton, built the business around a discount culture that has in the past helped buoy its stock during recessionary times. In revising its outlook, Walmart cited the cost of reducing merchandise stockpiles that customers were increasingly reluctant to buy as inflation hits a four-decade high.

Walton’s three surviving children, Alice, Jim and Rob, daughter-in-law Christy and Christy’s son, Lukas, own just under half of the retailer. That gives them a combined net worth of about $US198 billion, according to the Bloomberg Billionaires Index, down 11 per cent since the first of the year.

Walmart wasn’t the only retailer to see its shares tumble. Canadian e-commerce firm Shopify fell 14 per cent after chief executive officer Tobi Lutke acknowledged the company’s decision to expand rapidly coming out of the COVID-19 pandemic didn’t pay off. As a result, the firm said it planned to cut about 10 per cent of its workforce. 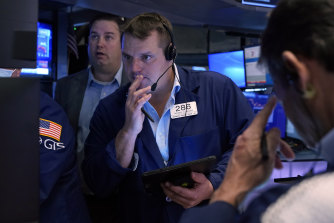 “We bet that the channel mix – the share of dollars that travel through e-commerce rather than physical retail – would permanently leap ahead by five or even 10 years” because of the pandemic, Lutke wrote.

“It’s now clear that bet didn’t pay off. What we see now is the mix reverting to roughly where pre-Covid data would have suggested it should be at this point.”

Tuesday’s decline shaved $US383 million from Lutke’s net worth, dropping the 41-year-old co-founder’s fortune to about $US3.1 billion, according to the Bloomberg index. Shopify’s shares have plunged 77 per cent this year.

The Walton family, which owns its Walmart stake through various trusts, has stepped up its stock sales in recent years. They unloaded $US6.2 billion in shares last year, which the company has said is part of a strategy to keep the family’s stake under 50 per cent amid buybacks.

Those sales, along with outside investments in US stocks and low-cost exchange-traded funds, has armed them with ample funds for acquisitions. A group led by Rob Walton agreed to buy the NFL’s Denver Broncos for a record $US4.65 billion. The deal, announced in June, still needs approval from the National Football League’s finance committee and league ownership.