Supermarket giant Woolworths has been forced to downgrade its projected profits for the first half of the new financial year after a $220 million cost blowout due to a swathe of COVID-related issues.

The retailer told shareholders this morning direct costs at its supermarkets division were expected to be $150 million for the six months to the end of December. These expenses relate to costs incurred in the company’s stores and supply chains to protect staff and customers from the pandemic. 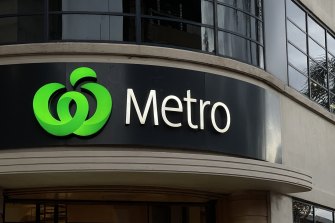 Woolworths has seen its cost blow out by $220 million due to COVID.Credit:

However, an additional $60 to $70 million of ‘indirect’ costs will also be weathered by the major grocer this half, which chief executive Brad Banducci said was due to the disruption caused by the pandemic at the company’s distribution centres.

Woolworths has been forced to defer a number of planned initiatives at its warehouses that would have improved performance in its supply chain. The company has also incurred higher costs due to the record level of consumer demand, fuel price increases, and the impact of balancing its food supply across the eastern states.

“The first half of F22 has been one of the most challenging halves we have experienced in recent memory due to the far-reaching impacts of the COVID Delta strain and its impact on our end-to-end stock flow and operating rhythm,” Mr Banducci said.

“We have continued to put the health, safety and wellbeing of our customers and team first in the context of this challenging and volatile operating environment.”

Woolworths first-half results, due to be formally released in February, will also include a $35 to $40 million Christmas bonus payment to the company’s workforce.

Overall, sales in the supermarkets division have increased 3 per cent across the first half to date, however this was driven entirely by the business’ online division, which is less profitable than its bricks and mortar operations, further weakening earnings.

All in all, these additional costs will see the retailer’s first-half earnings at its supermarkets division come in between $1.19 billion and $1.22 billion, a notable drop on the $1.32 billion in earnings recorded in the first half of the 2021 financial year.

These costs are expected to significantly reduce in the second half, Mr Banducci said.

“As customer behaviours begin to normalise and COVID-related supply volatility reduces, we expect an improvement in our underlying operating performance and we will provide a more detailed update on the outlook for the remainder of fiscal 2922 at our H1 results in late February,” he said.