Supermarket giant Woolworths has announced nearly $100 million in costs and impairments for the current financial year due to a fresh round of warehouse worker redundancies and poor performance at its inner-city Metro stores.

Around 330 jobs are set to go with the retailer to close its Minchinbury warehouse in western Sydney in 2024 as the site has hit capacity, forcing Woolworths to begin planning a new site to service its 280-plus store network in NSW. 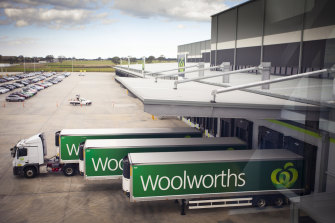 Woolworths has announced further warehouse redundancies due to the ongoing simplification and automation of its supply chains.Credit:Eamon Gallagher

The Minchinbury closure will cost the company $44 million in redundancy costs, though the business said it would explore redeployment opportunities and noted the job losses would be offset by the 700 new jobs set to be created through the construction of its new warehouse in Wetherill Park.

Woolworths will spend $400 million constructing the new site, which it plans to kick off in 2022, with chief executive Brad Banducci saying it would complete the company’s transformation of its NSW supply chain network, though he acknowledged the impact the Minchinbury site closure would have on staff.

“We understand the impact these decisions have on our team members and we are committed to supporting those impacted. We will explore redeployment opportunities wherever possible, and provide a wide range of support and career transition services in the lead up to site closure,” he said.

This marks Woolworths’ latest round of redundancies as the company looks to update and automate its supply chain network. Last June the business announced 1350 jobs would go following the closure of three of the company’s distribution centres in NSW.

Woolworths also revealed it would cop a $50 million impairment on its small-format Metro stores due to the impact of COVID-19, which has seriously reduced sales as shoppers have eschewed offices for home working.

The retailer said it remained committed to rolling out new Metro stores, but it was forced to impair the store and lease assets of 13 sites across the network, reflecting a “balanced view” on the likely speed of recovery for the country’s CBDs.

“The changing customer work and shopping patterns we have seen over the last 15 months have negatively impacted some of our stores, particularly in CBD and transit locations, resulting in the impairment announced today,” Mr Banducci said.

Three of the 13 sites have already been shut and Woolworths will review its options for the remaining 10, though stressed there were no immediate closures due to today’s announcements.

Finally, the company also reported $69 million in transaction costs due to the demerger of Endeavour Group and the acquisition of food services company PFD.

However, all of these costs were offset by a $220 million gain on the retailer’s investment in data firm Quantium, which increased its stake to 75 per cent in May, meaning the company will report a $57 million net gain for the full-year.