Woodside Petroleum, the nation’s largest oil and gas producer, has appointed internal candidate Meg O’Neill as its acting chief executive as the board’s search for the next CEO continues.

The announcement on Tuesday evening comes amid weeks of speculation about who will be selected to replace long-time CEO Peter Coleman after more than a decade at the helm of the $23 billion energy giant.

Earlier this week, Santos chief Kevin Gallagher, considered in the industry to be a lead contender for the Woodside top job, signalled his intention to stay at Santos after being offered a $6 million bonus plan to see through the company’s key growth projects at least the end of 2025. 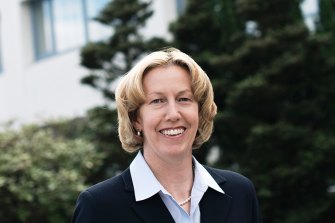 Woodside has named Meg O’Neill as its acting CEO.

Mr Coleman, who has previously announced his intention to retire, would step down from the board on April 19 and continue to work with Woodside until his retirement on June 3, the company said in a statement.

“Throughout his time at the helm of Woodside, Peter has demonstrated a commitment to promoting inclusion and diversity, operational excellence, a safe workplace, prudent capital management and maintenance of a strong balance sheet,” he said.

“The board’s internal and external search for Woodside’s next CEO is progressing,” the company’s statement said.

The search for Woodside’s next CEO comes at an important time for the company. Woodside and the other producers of oil and liquefied natural gas (LNG) were hit hard last year by the onset of the coronavirus crisis, which hammered demand, sent benchmark commodity prices tumbling to multi-year lows, and forced a sharp pull-back in spending across the sector.

After hitting pause on its multibillion-dollar pipeline of LNG projects, Woodside has been using the time to explore ways of making its projects more competitive against the prospect of lower oil and gas prices, and is now seeking to get its growth phase back on track.

It is aiming to give the go-ahead on the $17 billion Scarborough project off the coast of Western Australia in the “second half” of 2021.

Woodside is also facing investor scrutiny over its climate change commitments, with an influential proxy advisor recommending shareholders at Woodside’s annual meeting on Thursday vote in favour of a push for stronger disclosures about how its future plans are consistent with goals to slow global warming.

CGI Glass Lewis has recommended its clients defy Woodside’s board of directors and support the demands lodged by activist group Market Forces.

“We view climate change as a significant risk to the company and one which the company must consider when it is making significant expenditure decisions or setting its long-term strategy,” said CGI, a firm that advises institutional shareholders on how to vote on board appointments, executive pay and other corporate matters.