WASHINGTON ― Just a few hundred feet north of the White House on Wednesday afternoon, armed agents of the federal government, dressed in a patchwork of colors and protective gear, stared down peaceful protesters demonstrating for Black lives. Yet what was perhaps most alarming was what was not visible on many of the officers: any insignia revealing their identity or even the name of the agency they work for.

Some members of the Drug Enforcement Administration and FBI stationed throughout downtown Washington wore outfits that at least identified their agency, even if they weren’t wearing name tags that identified them personally. But the police line just north of the White House on Wednesday afternoon featured a patchwork of colors and agents wearing generic outfits ― sometimes what appeared to be just T-shirts under their protective gear that gave no indication of even their department or military branch.

Attorney General William Barr is leading this aggressive response that has brought in an alphabet soup of law enforcement agencies to guard federal property and suppress unrest: FBI; the Bureau of Alcohol, Tobacco, Firearms and Explosives (ATF); the Drug Enforcement Administration (DEA); the U.S. Marshals; and the federal Bureau of Prisons. Those Department of Justice forces join Homeland Security officers, the D.C. Metropolitan Police Department, the Capitol Police, the Federal Protective Service, the Secret Service and the District of Columbia National Guard.

Bringing in so many law enforcement agencies has the potential to create problems ― each has its own culture, practices and command structures. Allowing federal law enforcement to operate with anonymity all but eliminates accountability when force is inevitably used against demonstrators. Critics say it also breeds government distrust and is reminiscent of authoritarian regimes. 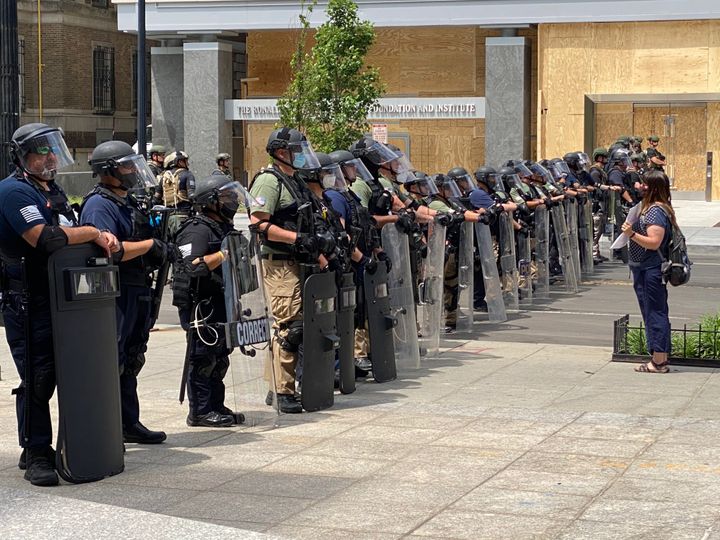 At least some of the officers on the police line by the White House appeared to be with the Bureau of Prisons, which dispatched Special Operations Response Teams that the BOP told HuffPost are “highly trained tactical units capable of responding to prison disturbances” and “specialize in crowd control scenarios” behind bars.

A senior Justice Department official credited Barr with the idea of bringing in federal prison corrections officers, calling it an example of Barr’s “outside the box” thinking. “He brought those people in,” the official said, because dealing with riots is “exactly what they do best.”

The senior Justice Department official confirmed that the prison bureau officers were stationed near the White House, though the BOP declined to verify whether the armed men photographed facing off with peaceful demonstrators Wednesday did, in fact, work for BOP.

“We cannot verify the individuals in the photos you referenced,” the Bureau of Prisons told HuffPost. “For safety and security reasons, we are not providing more specific information about law enforcement operations.”

A Huge Problem For Oversight

“It completely undermines the ability to hold law enforcement personnel who engage in misconduct accountable,” said Bromwich.” You’ve got to know who they are, and certainly which agency they represent.”

Many of these Justice Department components, especially the BOP, have opaque internal affairs systems that don’t hold federal law enforcement officers accountable even in normal circumstances. But Bromwich said he has never seen a situation in which large numbers of law enforcement personnel haven’t been identifiable by name or even by agency. “I don’t know if there’s any historical precedent for that.”

The senior Justice Department official said that concerns about officer identity are a “red herring” because surveillance video would make it easy to identify any officers as necessary.

“We’re pulling in people from all over the country to help secure a city,” the senior DOJ official said. “We’re focused on getting them fed… making sure that they have the proper equipment they need. Frankly, the logistical elements that have been done here have been amazing.”

He downplayed concerns that federal government agents refused to identify their agency to protesters or to journalists.

‘This is an incredibly volatile scene,” the senior DOJ official said. “So to the extent people are asking ‘Who are you, who are you with, what are you doing?’ I don’t think you should read anything [into it] if people aren’t responding. This is very different than a normal law enforcement function.” 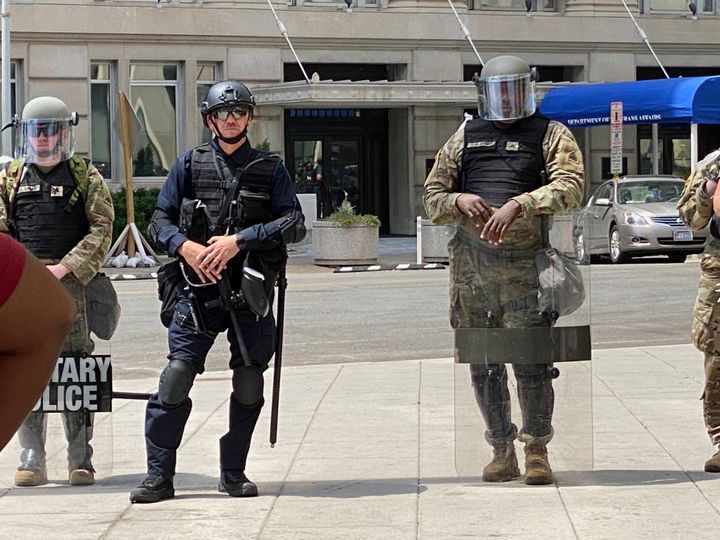 During the Obama administration, the DOJ said in a letter to the Ferguson Police Department in Missouri that allowing officers to work anonymously creates “mistrust and undermines accountability” and “conveys a message to community members that, through anonymity, officers may seek to act with impunity.” An after-action report of the police response to the Ferguson demonstrations over the police killing of Michael Brown ― a report that former members of law enforcement co-authored ― said that the removal of nameplates “defeated an essential level of on-scene accountability that is fundamental to the perception of procedural justice and legitimacy.”

Christy Lopez, the former Justice Department official who warned Ferguson about the lack of nameplates, said the anonymity of officers on the streets of D.C. was “an indication of how upside-down this administration is.”

“By failing to ensure that their officers are identifiable, and thus more readily held accountable if they violate people’s rights, federal law enforcement officials are acting akin to the bystander officers in Minneapolis: aligning themselves with those who would commit and conceal police abuse rather than sending a clear message to the public and to their own officers that such abuse will not be tolerated,” Lopez said.

Bromwich said it was “very problematic” to send components of the Justice Department with very specific responsibilities into an environment divorced from their typical duties. Members of the FBI hostage team, who have also been spotted on the streets of D.C., are “not used to dealing with mass protests,” Bromwich said.

“They’ve probably never had even an hour training about that,” Bromwich said. “It’s unfair to them and unfair to protesters to have them deployed to do this.”

Democratic leaders were not informed of the agencies deputized to patrol the protests. A House Democratic aide familiar with the committee’s work said it is in the process of figuring out what each agency has been deployed to do as the scene unfolds around them.

Members of Congress also asked for specifics on which agencies had officers on the ground Monday, when federal law enforcement advanced on peaceful protesters with pepper spray, smoke canisters and nonlethal projectiles as they cleared the way for President Donald Trump to hold a photo-op outside of St. John’s Church. 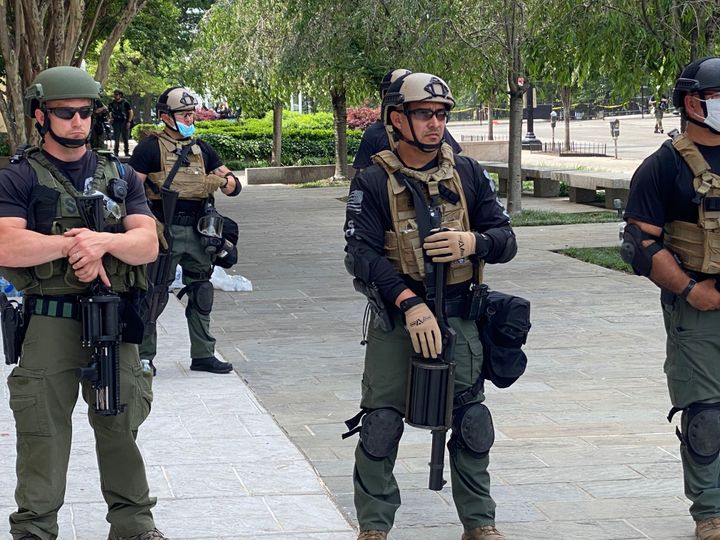 “When you can’t tell who people are, then there is no accountability at all,” Beyer said. “You can go out and bust any heads you want to because who is going to hold you accountable if you are anonymous — especially with the big face masks.”

Beyer, who has been watching videos of protests, said he could not distinguish federal personnel but that local law enforcement officers were also covering their badge numbers with black tape, a practice that was initially done to honor colleagues who died of the coronavirus. Police in D.C. are required in police guidelines to identify themselves when asked and keep their badge numbers present while on the job.

“You don’t know who they are, who they represent,” Beyer said. “Are they even allowed to carry weapons in Washington, D.C.?”

Beyer hopes they can bring the bill up for a vote in the next two months.

“We cannot tolerate an American secret police,” the senator wrote.

Bromwich, the former Justice Department watchdog, said that the rhetoric from Trump and Barr could give federal law enforcement officials cover to use excessive force on demonstrators.

“The risk of using excessive force is that you’ll be accused of it and that it will be sustained and it will be punished,” he said. “That risk seems to have been removed.”