Attorney General William Barr, who has served as President Donald Trump’s right-hand man and protector, waited nearly an entire month after the 2020 presidential election to publicly state the obvious: Trump doesn’t have evidence for his conspiracy theories about widespread voter fraud.

“To date, we have not seen fraud on a scale that could have affected a different outcome in the election,” Barr told The Associated Press on Tuesday, adding that most claims of fraud were “not systemic allegations” and that any allegations were run down.

Multiple key officials have said the same. But Barr’s admission is striking because he’s one of the Trump officials who promoted fear about election fraud in the first place. In the lead-up to the election, Barr and Trump-appointed U.S. attorneys across the country told the public they were keeping a close eye out for voter fraud.

Election Day 2020 went pretty smoothly overall, especially amid a global pandemic. Barr was looking for fraud, and he didn’t find it.

He did, however, wait nearly a month after Election Day to state he hadn’t found widespread fraud. During that time, Trump and his supporters like Rudy Giuliani have kept spreading increasingly unhinged conspiracy theories about mass voter fraud, insisting that Trump actually won in a landslide. Trump and his team have continued floating conspiracy theories even as former and current law enforcement officials warned that they posed a public safety threat. Barr, the top law enforcement official in the country, stayed quiet even as these dangerous theories spread. 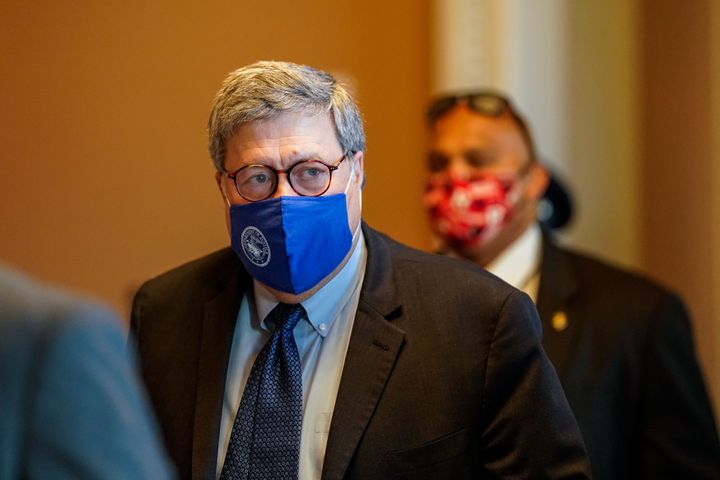 After Barr’s comments to the AP, what remains of the Trump campaign quickly went on the attack. Giuliani and Jenna Ellis, a Trump campaign senior legal adviser, said Barr’s opinion “appears to be without any knowledge or investigation of the substantial irregularities and evidence of systemic fraud.”

The allegations that have been emerging from the Trump camp fall apart under the slightest scrutiny, and often, Republican-appointed judges have quickly booted them out of court. Even amid the Trump campaign’s legal battle ― in which it has attempted to disenfranchise millions of Americans and convince Republican state legislators to help overturn the will of voters ― only a handful of elected Republicans have been able to publicly admit that Joe Biden is the president-elect.

Trump will remain a formidable force in Republican politics for the foreseeable future, so Republicans don’t want to cross him just yet and incur his wrath and that of his supporters. But Barr’s comments on voter fraud could potentially make it easier for Republican officials to make the jump, even as they use bogus or exaggerated claims about fraud to support further voting restrictions that would make it more difficult for primarily Democratic voters to cast ballots.

Barr’s comments could provide cover for another Republican: FBI Director Christopher Wray, a Trump appointee who has to worry both about being fired by Trump and about keeping his job once Biden takes office. So far, Wray has remained silent. The FBI’s press office, which has repeatedly declined to comment about Trump’s voter fraud conspiracy theories, declined HuffPost’s request for comment following Barr’s remarks to the AP.

Even as he shot down the Trump campaign’s mass voter fraud conspiracy theories, Barr still offered the president a spoonful of sugar: He announced that, last month, he had quietly appointed U.S. Attorney John Durham as a special counsel to investigate certain intelligence and law-enforcement activities surrounding the 2016 election and the origin of the Russia probe, which has been a Trump obsession for years.