You may need to check out Mel Brooks’ comic classic “Spaceballs” to understand the conundrum facing congressional Democrats later this year.

Democrats are trying to pass their social spending package. They finally got their infrastructure package out the door late last week. The infrastructure measure passed the House nearly three months after the Senate OK’d the bill. 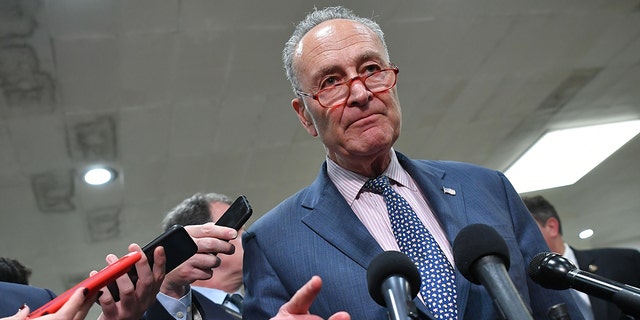 Senate Minority Leader Chuck Shumer is surrounded by media after a closed-door briefing on Iran at the U.S. Capitol in 2019. Recently, Schumer criticized Republicans for allegedly playing a "dangerous and risky partisan game."
(MANDEL NGAN/AFP via Getty Images)

But here’s the problem:

Lawmakers must approve a stopgap spending bill or face a government shutdown by Dec. 3. That’s also around the same time the federal government will hit the debt ceiling.

It’s not out of the question yet. But Democrats could enroll all of the above issues into one mega, gargantuan bill costing trillions of dollars. The U.S. Congress has never passed a bill of this immense dimension and scope.

The opening scene of the original 1977 Star Wars movie (Episode IV: A New Hope, as it was dubbed later) is one of the most iconic in cinematic history. The movie begins with a rebel ship trying to outrun a massive, Imperial star destroyer. At first, you see the rebel ship pass.

But then comes the Imperial craft.

It is a monster.

Filmmaker George Lucas tees up a fabulous underdog versus Goliath narrative by showing just how large the Imperial ship is in the film’s first few frames. Lucas runs the undercarriage of the Imperial Star Destroyer across the screen for a full 12 seconds. Theatergoers are staring up at the bottom of the ship as it cruises by, consuming nearly the entire screen. The shot from below reveals all of the various docking bays, struts and electrical assemblies powering the ship. It’s meant to be intimidating.

You sit in the theatre and say “Whoa!”

This gets us to Mel Brooks’ 1987 tour de force, “Spaceballs.” It’s a parody of Star Wars, Star Trek, The Wizard of Oz, Alien and Planet of the Apes.

It goes on for the first minute and 31 seconds of the movie. Anyone in the theatre remotely familiar with the first moments of Star Wars would be on the floor, cackling hysterically at Brooks’ farce.

The ship in Spaceballs makes the Star Wars Imperial craft appear puny. Like skiff on a pond. Not a sinister, imposing Star Destroyer.

So, let’s get out of the theatre and back to Capitol Hill.

House Democrats are going to try to pass their social spending bill in the coming days, followed quickly by the Senate. This is supposedly a November project.

Then, come December, lawmakers need to avert a government shutdown and perhaps lift the debt ceiling.

It’s unclear if the House and Senate can get all of this done that fast. This is further complicated by the Congressional Budget Office (CBO). Moderate Democrats insisted that the House hold off on voting on the social spending package until CBO released a “score,” a total cost evaluation of the bill. CBO has started to release sections of its analysis. But things are far from complete. A delayed, full CBO score could prevent the House from debating the social spending package.

Any bill to fund the government, even on an interim basis, would be subject to a Republican filibuster. It needs 60 yeas to overcome the filibuster. The same with a bill to lift the debt ceiling. Senate Minority Leader Mitch McConnell, R-Ky., warned Democrats that Republicans wouldn’t help raise the debt limit in December or help break a filibuster. McConnell has long thought Democrats should do it on their own – using the special, filibuster-proof, budget reconciliation bill. Democrats are already turning to budget reconciliation to skirt a filibuster on the social spending package.

After some Republicans helped Democrats avert a filibuster on a debt ceiling bill in September, the GOP felt Schumer spiked the ball.

“Republicans played a dangerous and risky partisan game,” excoriated Schumer minutes after the September debt limit vote. “The solution is for Republicans to either join us in raising the debt limit or stay out of the way.”

McConnell immediately fired off a stern letter to President Biden, promising that his members would remain on the sidelines for the December debt limit dance. It was a threat worthy of the Spaceballs’ villain Pizza the Hutt.

“Schumer marched the nation to the doorstep of disaster,” wrote McConnell. “In a bizarre spectacle, Senator Schumer exploded in a rant that so partisan, angry and corrosive that even Democratic Senators were visibly embarrassed by him and for him.” 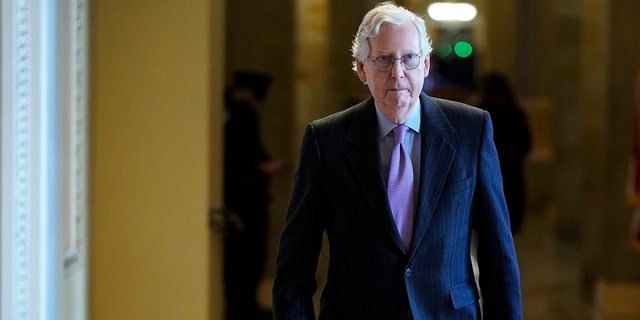 “[Democrats] cannot invent another crisis and ask for my help,” warned McConnell, pushing Democrats to raise the debt limit via the special reconciliation bill.

It was almost as though McConnell was channeling Rick Moranis as “Dark Helmet” in Spaceballs. McConnell was daring Democrats to tinker with disaster. As Moranis declares in the movie, McConnell was practically saying to Democrats, “What’s the matter, Col. Sanders? Chicken?”

McConnell is boomeranging the Democrats’ spending aspirations against them at a time the nation needs to lift the debt ceiling. This is politically convenient for McConnell as Democrats are on the precipice of passing yet another enormous spending package. But McConnell’s resistance to assist means Democrats may have only one parliamentary option: stuff the social spending plan, a bill to avert a shutdown and a plan to lift the debt ceiling into a staggeringly cosmic-sized bill.

All big, yes. But those are just Imperial Star Destroyer-sized pieces of legislation. They’re svelte compared to what Democrats could be forced to do: jam everything into a bill the size of the ship on Spaceballs.

This bill would be ridiculous in size. Of epic proportion. 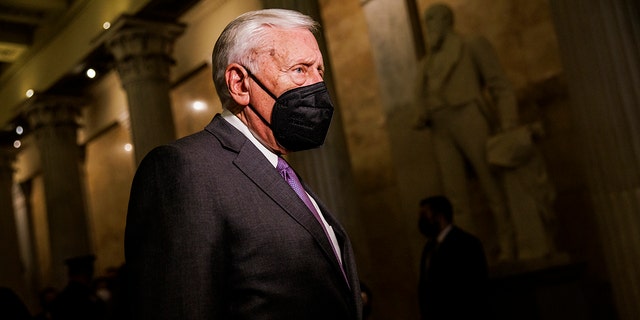 House Majority Leader Steny Hoyer (D-MD) awaits the arrival of U.S. President Joe Biden ahead of a meeting between the president and House Democrats over continued negotiations on the domestic spending bills before the president departs for Europe on Oct. 28 in Washington, DC. Recently, Hoyer explained that they are not expecting the debt ceiling to be a part of the reconciliation bill.
(Samuel Corum/Getty Images)

“At this point in time, there is not an expectation that [the debt ceiling] will be in this reconciliation bill,” said Hoyer. “We should be dealing with it in a bipartisan way.”

But McConnell is holding out. And so far, the Congressional Budget Office isn’t getting a cost evaluation back to lawmakers at “ludicrous speed.”

Democrats may have no other option. Just pass it all in a singular, solitary, Spaceballs-sized bill.

As they say in Spaceballs, they may have “gone to plaid.”