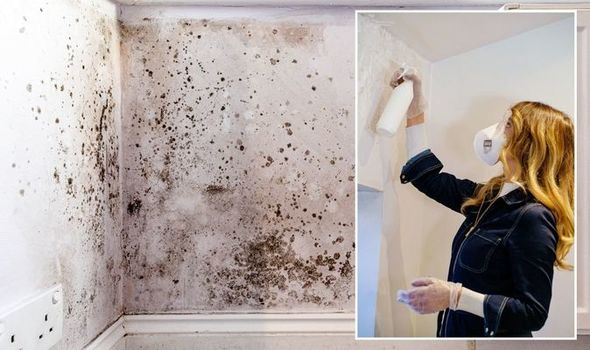 Mould is one of the biggest housing problems people can face, whether they own a home or rent. Research from housing charity Shelter estimates that 11.8 million people in Britain are currently suffering from mould. Not only is it unsightly, it can negatively affect health if it is not dealt with. TV personality and interior expert Whinnie Williams has teamed up with B&Q and Shelter on the Break The Mould campaign to help the nation spot, remove and prevent mould for good.

In a video for the campaign, Whinnie provided simple and practical advice on where mould is typically found and how to eradicate the problem.

She explained: “Mould is pretty common in Britain and is mainly caused by condensation.

“Breathing is in is bad for your health and especially dangerous to children and people with underlying respiratory issues.”

Whinne explained that one of the main reasons for mould in the home is due to damp and humid conditions.

To help prevent this, the expert recommended regularly ventilating the home.

She added: “For renters, it’s best to ask your landlord to fix any problems that are causing mould straight away, especially if it’s something that needs repairing or is affecting your health and safety.”

Mould can appear in a variety of different areas around the home including behind and inside cupboards.

This is because it thrives in dark places.

Whinnie continued: “If you can, open the window for a short while or you can invest in a moisture trap, which draws the moisture out of the air that will help stop damp setting in.”

When it comes to getting rid of mould, using gloves, a mask and eye goggles are recommended.

The interior expert also advised using a dust sheet or old towel to protect the floor from residue.

Whinnie said: “There are a number of ways to tackle mould and the best and easiest is to get a mould remover spray.

To help prevent the mould coming back in certain areas, Britons can paint the area with an anti-mould paint.

Jo Curtis, Community Manager at B&Q said: “At B&Q, we believe that anyone can improve their home to make life better.

“Mould is a very real problem that affects many people in the UK every single year, that’s why we’ve launched the Break The Mould campaign, to show everyone just how easy it is to tackle the problem themselves, alongside our ongoing work to support Shelter, to help those who need it most.”

Polly Neate, Chief Executive of Shelter, added: “Mould is one of the biggest housing issues people face. Every day our frontline advisors hear from people who are worried sick about the mould in their homes – it can take a huge toll on their physical and mental health.

“That’s why we’ve teamed up with our partner B&Q on the Break The Mould campaign. We hope the simple advice and tips we can provide will help people, including landlords, to learn how to tackle mould better, and also support renters to understand their housing rights so they can get problems in their home fixed.”