Reaching its historic $1 trillion market cap in 2018 took 44 years. Last August, just two years later, it reached $2 trillion. If it reaches $3 trillion this week, the company will have hit that milestone in about 16 months.

More store closures could hamper that run. On Monday, Apple temporarily closed all 11 of its retail locations in New York City due to a rise in the number of COVID-19 cases. People can still place online orders and pick up their goods outside the stores.

The temporary closures began with three Apple Store locations earlier this month. According to a report in MacRumors, 21 U.S. stores have been closed temporarily due to the latest surge in coronavirus infections, not counting the New York City closures. Another five stores in Washington state have been temporarily closed due to severe weather.

Seven stores in Texas are temporarily closed, including three in Houston, while three stores have been closed in both Georgia and Ohio. Two California stores and two Virginia stores have also closed.

Apple does not make it simple to find out which stores are not open. At the Apple website’s store list, click on the store you want to visit and then click the link for available services. The green checkmark indicates which services are currently available at the Williamsburg location in Brooklyn, New York. 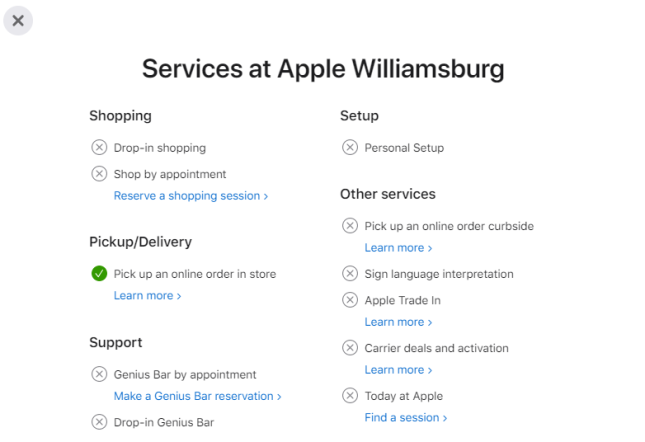 App Store data indicates that the most downloaded app on Christmas Day was Meta Platforms’ (i.e., Facebook’s) Oculus VR app. Meta’s app beat out such perennial favorites as YouTube, TikTok and Instagram. The company did not disclose how many headsets it sold during the holiday shopping season.

A new high-performance laptop from Razer that uses Intel’s Alder Lake processor (officially, the Core i7-12800H) performed slightly better than Apple’s 16-inch MacBook Pro with Apple’s M1 Max processor. Data uploaded to GeekBench last week reports a single-core score of 1,796 and a multi-core score of 12,258. The MacBook Pro scores were 1,756 for a single core and 12,347 for a multi-core CPU. Screen Rant has more details.