An Ohio public school has been giving students extra credit for watching videos from PragerU, a right-wing website that produces clips of talking heads such as Candace Owens and Ben Shapiro discussing conservative viewpoints, HuffPost has learned.

The PragerU videos — with titles such as “Build the Wall,” “Why the Right Was Right” and “The Left Ruins Everything” — were assigned to a 10th-grade history class at Maumee High School, along with a series of questions about the videos’ “most important messages.”

The assignment came at the same time that the website has tried to gain further influence in K-12 classrooms. Earlier this month, the organization launched a program directly aimed at parents and educators, complete with study guides with sections such as “Conservatives Are the Real Environmentalists” and “The Ferguson Lie,” based on a HuffPost review of the materials.

Andrea Cutway, the mother of 16-year-old student Avery Lewis, brought the assignment to the attention of Maumee City Schools administrators and immediately pulled her daughter out of the class. Maumee is about 10 miles southwest of Toledo.

Administrators first tried what they deemed a compromise by also assigning work that reflected views from the other side of the political spectrum to the student, Cutway said. But after HuffPost reached out to the school about the assignment, it decided to remove the materials from the syllabus, Todd Cramer, superintendent of Maumee City Schools, told HuffPost.

Other PragerU videos on its website dissect issues in five-minute clips and have titles such as “There Is No Gender Wage Gap,” “How to Steal an Election: Mail-In Ballots,” and “Is Islam a Religion of Peace?”

The teacher’s class website shows that she also assigned the videos last year.

The homework assignment appeared unrelated to PragerU’s latest venture, called PragerU Educators and Parents, or PREP, which launched several weeks ago. The inception of such a program suggested that these types of assignments may become more prevalent in schools.

Already, “2,000 parents and educators have already signed up for PREP,” Craig Strazzeri, chief marketing officer of PragerU, said in an email to HuffPost.

PragerU started the PREP program in response to COVID-19-related school shutdowns, which “forced us to take a closer look at what is being taught and not taught across the country,” said Adrienne Johnson, PragerU’s chief of staff and lead of the PREP platform, in a video interview with conservative news channel One America News Network. “America is not being fairly portrayed. Many schools are implementing anti-racist Black Lives Matter curriculum and The 1619 Project.”

In recent weeks, President Donald Trump targeted The 1619 Project, an initiative of The New York Times Magazine, which elevates the importance of the first year enslaved Africans arrived in America and reexamines American history with that year in mind. Schools around the country are teaching a curriculum based on the project, which won a Pulitzer Prize last year.

Lewis was immediately alarmed when she started her extra credit assignment last week. The assignment asked her to watch PragerU videos and then answer questions about how the videos challenged her beliefs. She had hoped to use the assignment to tack on a few extra points to her grade after taking a test on which she suspected she performed poorly, but after seeing the videos, the teen didn’t think she could complete the homework.

Cutway, Lewis’ mother, was similarly shocked when her daughter showed her the assignment. She immediately fired off an email to the school’s principal asking who approved the assignment and whether or not students had been given any context for PragerU’s point of view.

“It’s ALT RIGHT propaganda,” Cutway said in the email to the school principal, which she provided to HuffPost. “If you Google PragerU and spend a few minutes scrolling, you will see that this site is controversial at best.” 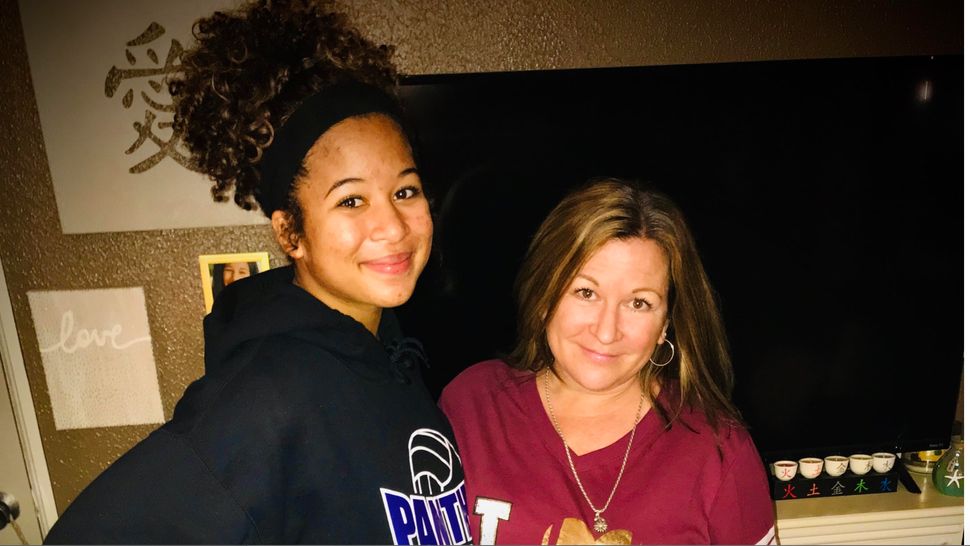 Cutway’s concern was less for her daughter, whom she sees as politically savvy enough to recognize that the site’s videos were one-sided. But she worried about other students, who may be learning about some of these issues for the first time and assume the videos are presenting facts rather than opinions. She immediately pulled her daughter from the class.

Lewis met with school administrators soon after to discuss the issue. Together, they came up with a solution ― that the teacher would also assign her viewpoints from the opposite side, Cutway said.

For Cutway, though, this ignored the larger issue ― that PragerU videos be assigned at all and that school administrators did not see a problem. She had a phone meeting with the administrators, which she found similarly disconcerting.

“When I talked to the principal and vice principal, they acted like this was just another assignment,” said Cutway, who works as a juvenile parole officer for the state. “I said, ‘I think at this time we need to end this call, gentlemen.’ … I don’t know what you have allowed to bring into your public school.”

“This really is some scary stuff,” Cutway said of PragerU. “I do feel like they have found a way to get into the public school system.”

The teacher who assigned the videos did not respond to a request for comment.

Since Cutway’s conversation with the school administrators, district leaders appeared to have had a change of heart and said they removed the assignment from the syllabus, though they stopped short of condemning the overall use of such materials.

“We believe that students deserve a balanced presentation of content,” district Superintendent Cramer said when asked if the school condoned use of PragerU materials. “We support our educators in using a variety of instructional tools and materials. We expect our educators to exercise good judgment and trust our students, parents and community to engage our staff in conversations about our instructional methods and the materials being used if they feel the need to do so.”

The incident, he said, “has also led to internal conversations focused on ensuring we are presenting content through a variety of balanced materials.”

Cutway was especially concerned for how the school assignment could have made immigrant students or LGBTQ people feel, she said.

PragerU is no stranger to controversy. In 2017, the organization sued YouTube after the site flagged some of its videos as “inappropriate,” alleging that such a move amounted to censorship and violated the First Amendment. A federal court ruled that a private firm such as YouTube wasn’t bound by the First Amendment in this case.

The PREP program study guide quizzes students with true-false questions such as “nearly all the major 19th- and 20th- century breakthroughs in health care were made by Western Europeans and North Americans.” (The study guide says the answer is true.) Another true-false question asks students to evaluate the following statement: “Big Tech with its control of search algorithms, its shadowbanning, and deboosting supports political correctness and the resulting limitations of freedom.”

In the OANN interview, Johnson said the program has signed up “so many” educators.

“Seeing what they’re saying when they join the discussion forum, these are people who value children, value children’s education, and they are just heartbroken by what they see happening in schools and the leftist indoctrination. This is a place where they can come and fight against that,” she said.