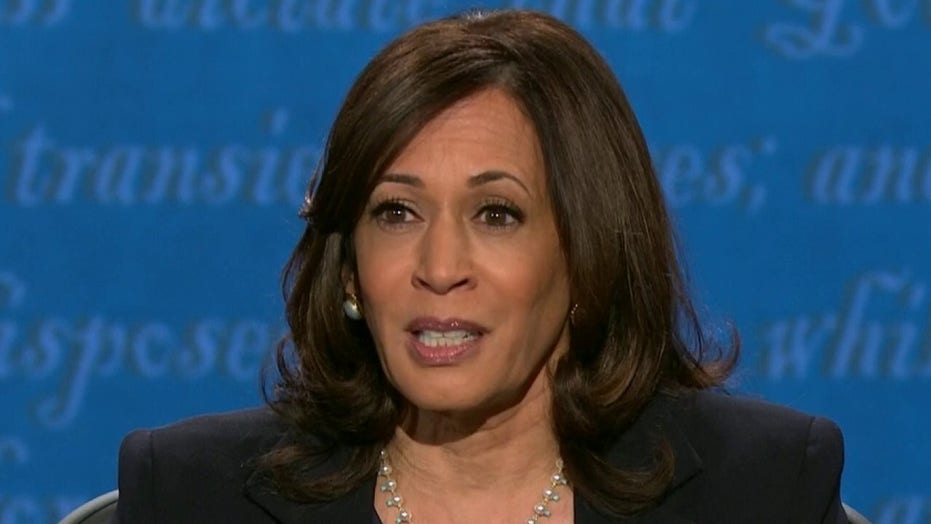 Harris: It would be good to know who the president owes money to

Democratic presidential candidate takes shots at Trump’s taxes and asks who he owes money to.

Democcratic vice presidential candidate Kamala Harris went after President Trump for not paying enough money in taxes, and questioned who he might owe money to.

“We now know because of great investigative journalism that Donald Trump paid $750 in taxes,” Harris said during Wednesday night’s vice presidential debate. “When I first heard about it, I literally said, ‘You mean $750,000?’ Nope $750.”

Harris was referring to a recent report by The New York Times, who obtained information on the president’s 2016 and 2017 taxes, both of which show he paid a total of $750 in federal taxes each year.

The Times also reported that he paid no federal income taxes for ten of the 15 years prior to winning the presidency in 2016, largely due to the fact that he reported financial loses greater than his income.

“We now know Donald Trump owes, and is in debt for $400 million, and just so that everyone is clear, when we say in debt – it means you owe money to somebody,” Harris said Wednesday in answer to a question about presidential transparency.

Trump has disregarded the report as “fake news” and claimed that his tax returns would be available as soon as the IRS had completed their audit.

Pence, however, highlighted the president’s dismissal of the report and said, “the American people have a president who’s a businessman, a job creator, he’s paid tens of millions of dollars in taxes – payroll taxes, property taxes, he’s created tens of thousands of American jobs.”

“The president said those public reports were not accurate, and the president also released literally stacks of financial disclosures, the American people can view," Pence added.

The New York Times also addressed the annual financial disclosure forms that the president is required to complete, and said the president portrays a “distorted picture of his financial state” by reporting revenue and not any profits.

“In 2018, for example, Mr. Trump announced in his disclosure that he had made at least $434.9 million. The tax records deliver a very different portrait of his bottom line: $47.4 million in losses,” the Times reported in late September.

Trump has not yet responded to Harris’ comment regarding his taxes, but released a series of tweets in support of the vice president.

“Mike Pence is doing GREAT! She is a gaffe machine,” Trump tweeted Wednesday night as the debate continued.

“The one thing we all know about Joe, he puts it all out there. He’s honest, he is forthright, but Donald Trump has been about covering up everything," Harris said.

“I think there couldn’t be a more fundamental difference between Donald Trump and Joe Biden,” Harris added before jumping in on Trump’s tax plan.

“Donald Trump…measures the strength of the economy based on how rich people are doing, which is why he passed a tax bill benefiting the top one percent and the biggest corporations of America, leading to a $2 trillion deficit that the American people are going to have to pay for.”

Pence pushed back on Harris’ claim that Biden will be better for middle and low income Americans.

“He said he's going to repeal the Trump tax cuts,” Pence said interrupting during Harris’ time, causing the first heated exchange between the two candidates as Harris reminded him it was her time to speak.

“Joe Biden has been very clear, he will not raise taxes on anybody who makes less than $400,000," Harris said.