The government has secretly purchased 11 hectares (27 acres) of land 20 miles from Dover to site a vast new Brexit customs clearance centre for the 10,000 lorries that come through the Kent port from Calais every day.

It will be the first customs post erected in the UK to deal with goods coming from the EU for 27 years.

Work will begin on fencing off the vast 1.2m square foot “Mojo” site on the outskirts of Ashford on Monday. The local council were given only a few hours’ notice that the land was now in public ownership.

After being informed on Friday afternoon, the council leader has been forced to rush out hand-delivered letters to local residents to warn them of the disruption, Paul Bartlett, a Conservative councillor, told the Guardian.

The letter, from Rachel Maclean, MP and parliamentary undersecretary of state for transport, will say: “We are writing to inform you that the Department of Transport has purchased the site known as ‘MOJO’ (Church Road, Sevington, Ashford). Preliminary works are scheduled to take place on the western parcel from Monday 13 July 2020. This will include: securing the site with fencing, grass and weed vegetation cutting, extensive survey work, the constructing of a temporary site office, and the constructing of a temporary access to the site from the A2070 link road.

“Plans have not yet been finalised for the use of this site, but is anticipated to form part of the Department’s strategy to minimise potential disruption at Kent ports for the end of the transition period. This is likely to involve temporary capacity for the holding of delayed HGVs and facilities for border-related controls to be carried out by government agencies (eg HM Revenue and Customs). More detailed information will be provided in due course.”

The emergency purchase of the site is expected to be unveiled on Sunday by Michael Gove, who is to tour TV studios publicising the government’s multi-million-pound Get Ready for Brexit campaign. Businesses are bracing themselves for the publication of the first official details of the new border operating model and immigration system on Monday.

The government has been forced to introduce customs controls because of the decision to leave the EU’s single market and the customs union on 1 January.

When the single market came into being in January 1993, trade barriers across the bloc disappeared along with tariffs that many will remember as marking the end of duty-free alcohol and cigarettes. But from 1 January, the UK will revert to a system whereby importers will have to make customs declarations. 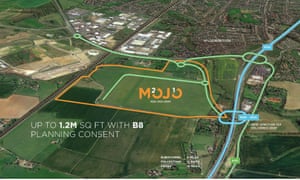 There are fears locally in Kent that it could lead to massive congestion and tailbacks on the motorways from both the port of Dover and the Eurotunnel freightway in nearby Folkestone.

Last year contingency plans known as Operation Brock had to be put in place to guard against gridlock in the event that the UK crashed out of the EU with no deal.

Bartlett said it was no surprise that the land was going to be developed as it had been empty for almost 10 years and that HM Revenue & Customs operations would be more welcome locally than the rumoured Amazon warehouse. “It is a huge tick that this creates skilled jobs,” he said.

But he was concerned about the government rushing the new trading environment through. “Boris [Johnson] needs to be careful that these customs and tariff arrangements are finalised and in place in time, because otherwise there could be serious congestion, and we don’t want that.

“There is an enormous amount of trust involved in Boris and his counterparts in Europe to get us where we need to be for 31 December and time is not on our side,” he added.

Multiple government spokespeople declined to comment on plans saying details would be revealed “over the weekend”.