Uber has acquired Australian car sharing platform Car Next Door as part of an expansion of its services away from its original ridesharing service and offering its users a viable alternative to car ownership.

Car Next Door will operate as an independent unit within Uber’s Australian operation with the rideshare giant highlighting the fact that it gives customer transport options that are not suited to its traditional service such as a day trip. 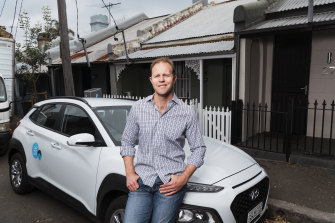 Car Next Door founder Will Davies says the acquisition by Uber will help the company scale up its ambitions. Credit:James Brickwood

Dom Taylor, the general manager of Uber Australia and New Zealand said the option of mid-range and longer distance trips has been a missing option for Uber users.

“This deal will change that, and mean that the Uber platform can be a reliable and convenient alternative to the choice to own a car,” he said.

Car Next Door chief executive Will Davies said the deal will help the company scale up its ambitions and reduce Australians’ reliance on private car ownership.

“We know that many of our members are already combining carshare and rideshare with shared bikes and scooters, walking and public transport for a mobility mix that suits their lifestyle. We’re hearing from more and more people that they no longer feel the need to own a car, because getting transport on-demand saves them money and hassle,” he said.

No price has been given for the acquisition of Car Next Door which operates in Sydney, Melbourne, Brisbane, Gold Coast, Cairns, Perth, Canberra, Adelaide, Hobart, Launceston, and Newcastle.

Documents lodged with ASIC report that preference shares in the private company were sold for $198.25 just before Christmas. Based on shares issued, this transaction valued the company at $87 million.

South Korean carmaker Hyundai is among Car Next Door’s backers, having made a $6.2 million investment in 2019. Service station operator Ampol has also been named as an investor.