Uber is being sued by the competition watchdog for telling two million customers they could be charged a fee for cancellations that were actually free and for inflating the predicted price of regular taxis booked on its platform.

The ride-sharing giant has already admitted the breach in a settlement with the Australian Competition and Consumer Commission (ACCC), and the Federal Court will determine whether the agreed $26 million penalty is appropriate.

Uber typically has a free cancellation period of five minutes after a driver has accepted a trip. However, between at least December 2017 and September 2021 it told consumers wanting to cancel in that time: “you may be charged a small fee since your driver is already on their way”. 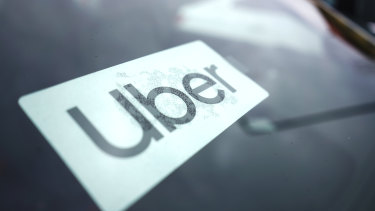 Uber has agreed to make joint submissions with the ACCC for a $26 million fine.Credit:AP

Uber changed it in September 2021 to read: “You won’t be charged a cancellation fee”.

It is the latest of a series of transgressions by Uber, including a record $203,500 fine from the NSW taxi regulator in 2021 for a host of breaches, including failing to tell it about assaults by and against drivers.

The legal problems pose a mounting problem for the company, which has been trying to turn around its image since its controversial co-founder Travis Kalanick resigned amid pressure from investors in 2017. He had presided over an aggressively expanding company that faced allegations of sexism, had battled regulators and dodged law enforcement.

Uber has already admitted to misleading consumers over the cancellation fee and taxi issues, and will make a joint submission with the ACCC to the Federal Court to approve a $26 million fine and declaration that Uber breached consumer law.

“Uber admits it misled Australian users for a number of years and may have caused some of them to decide not to cancel their ride after receiving the cancellation warning, even though they were entitled to cancel free of charge under Uber’s own policy,” said ACCC chair Gina Cass-Gottlieb.

In a statement on its website, Uber said it had reached a settlement position with the ACCC on Tuesday over what it called “historical issues”.

“We value the important work the ACCC carries out and have co-operated with the ACCC throughout its two-year investigation, including proactively making changes to our platform based on the concerns they raised,” the statement reads.

“Since the ACCC raised this, we have worked to streamline our in-app messages to make it clear exactly when cancellation charges will or will not apply, per occasion, so that riders always have certainty.”

The ACCC also said that between June 2018 and August 2020, Uber’s algorithm inflated the estimated fare for its ‘Uber Taxi’ option so that the actual fare was “almost always” cheaper than the estimate displayed.

Uber’s taxi ride option was only ever available in Sydney, and was removed after August 2020. Uber’s blog post said: “UberTAXI trips have always been a small portion of trips on the platform in Sydney, regardless we apologise for this.”

An Uber spokeswoman declined to elaborate on the statement.

Cass-Gottlieb accused Uber of misleading users about the taxi option cost and failing to ensure its algorithm was accurate. “Consumers rely on apps to provide accurate information and the misleading information on Uber’s app deprived consumers of a chance to make an informed decision about whether or not to choose the Uber Taxi option,” she said.

It is important for digital platforms like Uber to carefully monitor their algorithms and make honest statements given online interfaces are designed to influence consumer behaviour, she added.