Boosted by strong Chinese demand and elevated prices for exports of the steel-making material, Fortescue’s profit increased by 66 per cent to $US4.08 billion ($5.2 billion) for the six months to December 31. The miner exceeded analysts’ forecasts by announcing a higher-than-expected full-year dividend of $1.47 a share. 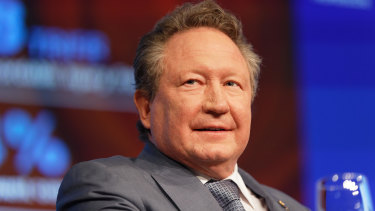 “Fortescue’s performance for the first half of the 2021 financial year has been outstanding,” chief executive Elizabeth Gaines said. “We are very proud of the whole team who have delivered our best half year operating and financial results since the company was established.”

On Thursday, Fortescue confirmed the cost of the project had blown out by $400 million and was now expected to cost $3 billion.

Fortescue is the third Australian mining heavyweight to report its profit this week, with BHP and Rio Tinto also beating expectations by delivering record returns to shareholders.

Dr Forrest – Fortescue’s founder, chairman and biggest shareholder – increased his stake in 2020 and now owns more than 36 per cent of the company.

Dr Forrest is the country’s richest person and a prominent philanthropist. He and his wife, Nicola co-founded the Minderoo Foundation and have donated $2 billion since 2001.

Iron ore is Australia’s most valuable export, accounting for $100 billion in annual export earnings. The price of the commodity has defied repeated predictions that it was overdue for a fall, and has doubled over the past year to $US170 a tonne as massive economic stimulus programs in China are fuelling robust demand at the same time as disruptions are affecting rival iron ore suppliers in Brazil.