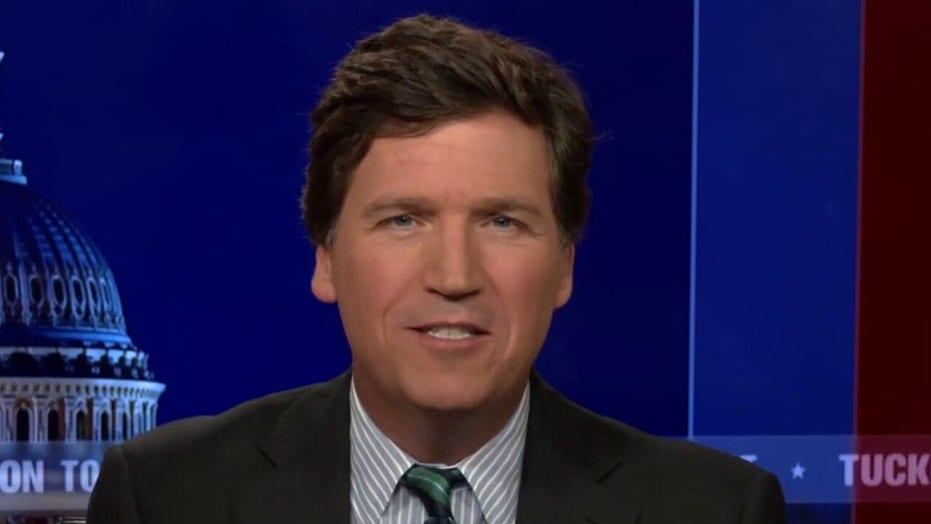 Tucker: Recall may be the last chance to save California

As a child growing up in South Central Los Angeles, Larry Elder had a secret. Elder’s father, who was a janitor, was Black. So was Elder’s mother. So were 80% of the people in their neighborhood. To all appearances, Larry Elder seemed Black too. That’s what the people around him always assumed. Little did they know that this child of South Central, apparently an African American in good standing, was in fact a secret agent working on behalf of global white supremacy? What an assignment – a white supremacist in South Central, imagine that.

And yet, for more than 50 years, no one had any idea this was going on. Elder spent decades in the public eye as a radio show host. Not one person during that time guessed the terrible truth. Then, last month, the crack investigative team at the Los Angeles Times finally broke the story. “Larry Elder is the Black face of white supremacy,” read the paper’s headline. “You’ve been warned.”

Busted! How did the LA Times discover this? It took real journalism. There were none of the usual telltale signs. No one caught Larry Elder resegregating water fountains or burning a cross on someone’s lawn. No. It was far more subtle than that and more dangerous. Larry Elder publicly insisted on exercising his constitutional rights and running for political office. Worse, and more damning, Elder criticized the leadership of the Democratic Party of California. He even went so far as to run against the sitting governor, Gavin Newsom. That’s how you know Larry Elder is a white supremacist: He challenged an incompetent liberal White guy who is personal friends with Nancy Pelosi. That, ladies and gentlemen, is racism.

The question is: Can Larry Elder win anyway? We’ll find out in three weeks. If Elder’s elected, he’ll be not only the first Black governor of California but also the most popular statewide official in recent memory. That’s the interesting thing. For a purported democracy, California has a long history of electing people that polls show just about everyone who actually lives there actually hates. It’s an awfully strange kind of democracy that way. Dianne Feinstein, for example, has represented California in the U.S. Senate for nearly 30 years. And yet her approval rating is just 35%. Somehow she keeps her job anyway. Kamala Harris did the same thing. When Harris ran for president, only seven percent of California’s Democratic voters said they supported her. Makes you wonder how Harris got elected in the first place, to anything. But don’t ask. A question like that would be what we call the “big lie.” Shut up and accept it.

The interesting thing is, California voters don’t technically have to accept it. A century ago, voters in the state amended their Constitution to allow the recall of demonstrably awful politicians who had unfortunately taken office. Let’s say you had a pompous, low-IQ governor who was totally incapable of managing his own empty personal life — but at the same time who, for his own perverse reasons, seemed totally intent on destroying the entire state. What would you do with a guy like that? On September 14th, California voters will have the chance to fire him. They have a recall option. 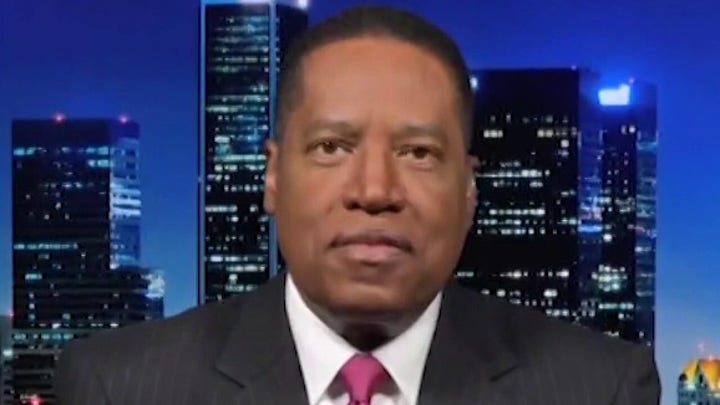 If a majority decides to recall Gavin Newsom, then the replacement candidate with the most votes will become governor. As of tonight, that’s likely to be Larry Elder. Elder could actually win. No wonder the LA Times is so upset. No wonder they deployed a crack investigative team to discover he’s secretly a White supremacist. Even dim old Gavin Newsom, who in the best of times seems only vaguely aware of his surroundings, who has what they say in the military “no situational awareness,” even that man, dopey old Gavin Newsom, has finally started to figure out he’s in very serious trouble.

GAVIN NEWSOM:  I think this is important to know, Larry Elder is running away with this on the other side. I just hope folks, I’m going to level set, what could happen on Election Day, if we don’t turn out in historic numbers to vote no on this recall. … Think of the judges he would appoint. Who would he have appointed to replace Kamala Harris in the U.S. Senate? How would that impact the direction of this country? What would this mean for the future of the Democratic Party?

That, ladies and gentleman, was a cry for help. And guess who heard him? The media in California. They work for him, so they immediately got to work. Here’s an actual line from a story produced by the so-called “news division” of the LA Times. “One issue was Elder’s pronunciation of the N-word. He used an exaggerated tone, enunciating the ‘er’ at the end of the word rather than using the ‘a’ pronunciation, which is more commonly accepted among and used by Black people, studies have shown.” Studies have shown! Really? By which researchers, in what social science labs? Who exactly is funding these studies on the N-word and how it is pronounced?

The L.A. Times didn’t explain any of that. There was no footnote to the story. Instead, the paper dispatched one of its “investigative reporters” to MSNBC, the natural venue to report their findings.

JOY REID: He says he doesn`t believe sanctuary laws or citizenship for dreamers should be happening. He`s against in-state tuition, health care, and driver`s licenses for the undocumented. … How serious are the chances that this guy could be the next governor of California?

JEAN GUERRERO, THE LOS ANGELES TIMES: Well, it`s very serious, because it`s possible that the majority of the people who are going to turn out are the people who are excited by Larry Elders` brand of extreme far-right beliefs. … And he just represents an incredible threat to immigrant rights and racial justice, the immense progress that California has made on these issues. And it would set a catastrophic precedent that would reverberate across the country.

JOY REID: It’s ironic, this is a Black man, and it just goes to show you that it is true that even people of color can be influenced by white supremacist narratives and fall victim to it, right?

So here you have the lady from the LA Times explaining to the Harvard race lady that the real problem is that voters might be too excited to vote for Larry Elder, they might be psyched to vote for their own leader, and that would set a terrible precedent. “Here’s a black guy who’s been brainwashed by a White man, and voters might like it.”

So how did we get here? Well, this is what happens when you let ideologues on Twitter control your state. By the way, the social media revolutionaries are not simply in charge of criminal justice policy in California, they’ve also taken complete charge of the energy grid. Right.

Newsom has ordered the state to transition to something called “renewables,” another term that’s never defined, by 2030. What’s the result of this? It’s a lot like what’s happening to Walgreens. The lights don’t work. The air conditioning’s dead. California frequently runs out of power. Zimbabwe on the pacific. Oh, don’t say that. Tough. It is. And everyone who lives there knows it.

But Gavin Newsom doesn’t care. He just keeps destroying California. Why does he hate California so much? In his first year as governor, homelessness – people living outside defecating on the sidewalk – jumped seven percent statewide. In LA County, it jumped 13% in one year. Have you been there recently? Three years ago, a U.N. official did show up. He came to San Francisco, the city Gavin Newsom once ran as Mayor, and promised to rid of homelessness, making it possible for women to jog in Golden Gate Park again. But he didn’t. So the UN official showed up – clearly, he’s seen a lot of bad places – and said the situation was so bad in California that it “constitutes cruel and inhuman treatment and is a violation of multiple human rights.” Was he overstating the case?

LAWRENCE JONES: This isn’t camping., These are homes. You see fighting, guns, knives, fires, drug use day in and day out.

WOMAN: You don’t realize sometimes what you’re living in the middle of until you see a video and you think “Wait a minute. That’s where I live.’

LAWRENCE JONES: There was a cleanup today. How often do they do this?

STORE OWNER: If I were a councilman I would be here right now talking to you and talking to these people and saying what are we going to do about this?!

STORE OWNER: The city councilmen have allowed these people to not have a rock bottom.

Oh, so did you pay attention to that racist lady at the end complaining that there are mentally ill drug addicts right in front of her store destroying the city? Another white supremacist.

So why is this happening? Well, you get what you put up with. That’s the first thing to note. The second thing to note is that California may be the only place in America where homelessness actually has a connection to housing prices. That’s not true in most places. It is true in California. The median home prices in California are now north of $800,000 for the first time ever. A lot of reasons this is happening – massive foreign investment from China is one of them. No one is even bothering to stop that because they’re taking payoffs from real estate developers. But the bottom line is, normal people can afford housing. What is Gavin Newsom doing to help them? Not one thing. Who is he helping? Well, he’s spending his time and your money awarding, among other things, free healthcare to hundreds of thousands of foreign nationals who snuck in. We used to call them illegal aliens. They’re foreign nationals with foreign passports, but they’re getting free healthcare from you.

It’s like a joke, but it’s not a joke, and it’s happening in our biggest state. Next month’s recall may be the last chance to save California. And you should want that. Because it matters because it’s our country.

But it’s also about something bigger than just one state. This recall is a test for democracy. The question is: Do elections still have meaning? Are voters allowed to choose their own leaders? Or does the LA times get to do that? Does the party apparatus get to do that? Do we have any power at all as citizens? Or are they going to steal it from us?

If the answer is “they’re going to steal it from us,” we’re in trouble. Once citizens conclude their votes are meaningless, they quickly become radical. Democracy is the safety relief valve that keeps our society placid. But when people think it’s fake, they go bonkers. They have no option. They have no power. They have nothing to lose.

So, it’s in all of our interests that the state of California conducts a free and fair election next month. Yes, with outside election observers. UN, you’re welcome, too. Why? Because there are indications it won’t be free and fair. Just yesterday, police in Torrence, California announced they found hundreds of stolen recall ballots in someone’s car. What were the ballots doing there? Oh, we don’t know.

This article is adapted from Tucker Carlson’s opening commentary on the August 24, 2021 edition of “Tucker Carlson Tonight.”