His name is not on the ballot, but former President Trump has plenty of skin in the game in Tuesday’s House special election Republican primary in Ohio’s 15th Congressional District.

The former president is backing Mike Carey, a longtime energy lobbyist and the chair of the Ohio Coal Association, who is one of 11 Republican candidates running in a district that includes parts of southern Columbus and its suburbs, as well as small cities, towns and rural areas in parts of central and southern Ohio.

In the race to fill a seat left vacant after longtime Republican Rep. Steve Stivers stepped down in May to become president and CEO of the Ohio Chamber of Commerce, Carey is spotlighting Trump’s endorsement.

“It’s a beautiful morning to get out and vote! Please join President Trump in supporting me today,” Carey tweeted Tuesday.

After an electoral setback last week in Texas when Susan Wright, the Trump backed candidate in an all-Republican House special election runoff in the state’s 6th Congressional District, was defeated, the primary in Ohio and the former president’s endorsement of Carey is grabbing plenty of national attention.

A senior Trump political adviser told Fox News on Thursday that “there’s a heavy emphasis on delivering a win” in the Ohio primary and added: “I expect him [Trump] to do whatever it takes to win.”

Trump headlined two tele-rallies for Carey, including one on Monday night, on the eve of the primary. And he brought Carey on stage during his late June rally in Lorain, Ohio, his first campaign style event since leaving the White House. 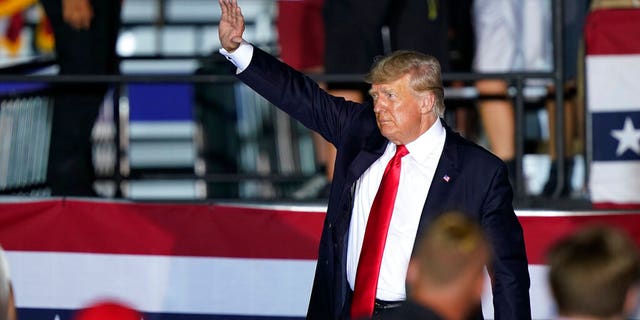 Former President Donald Trump waves to supporters as he leaves the stage after speaking at a rally at the Lorain County Fairgrounds, Saturday, June 26, 2021, in Wellington, Ohio. (AP Photo/Tony Dejak)

The former president took aim at Carey’s rivals, saying in a statement last week that “numerous candidates in the great State of Ohio, running in Congressional District 15, are saying that I am supporting them, when in actuality, I don’t know them, and don’t even know who they are.”

“Mike Carey is the only one who has my endorsement and he’s the one I feel will do the best job for Ohio, and for the United States. Please vote for Mike Carey next Tuesday, and let there be no further doubt who I have Endorsed!” Trump emphasized.

Trump remains extremely popular and influential with Republican voters six months removed from the White House, as he continues to play a kingmaker role in GOP primary politics and flirts with a 2024 presidential run.

But with Wright and GOP rival Jake Ellzey both conservatives and both strong supporters of Trump’s “America First” agenda, the election runoff in Texas to a degree turned into a referendum on the former president. And the victory by Ellzey, a Navy combat pilot veteran, in the extremely low turnout contest triggered plenty of stories questioning whether the results were a sign that Trump’s grip over the GOP was waning.

While Trump recorded a robocall, headlined a tele-rally and the pro-Trump Make America Great Again Action went up with ads in the final week before the runoff election, Ellzey greatly outraised and out spent Wright and out hustled her on the campaign trail.

And while Wright spotlighted the endorsements from Trump and Sen. Ted Cruz of Texas, Ellzey enjoyed the backing of a number of high-profile Lone Star State Republicans – including former longtime Gov. Rick Perry, Rep. Dan Crenshaw, a fellow combat veteran, and former Rep. Joe Barton, who represented the district for nearly three decades before not seeking reelection in 2018.

Make America Great Again Action is shelling out more than $300,000 to run commercials supporting Carey in the closing days of the Ohio campaign, more than double what they spent in the Texas contest, according to figures provided by AdImpact, a leading national ad tracking firm.

“Mike Carey stood with President Trump when he took on the political establishment,” says the narrator in the super PAC’s spot. “Now President Trump is standing with him.”

While Carey enjoys Trump’s backing, some of his rivals for the nomination are also being supported by well-known Republicans.

Stivers, who represented the district for a decade, is backing state Rep. Jeff LaRae in the GOP primary. And Sen. Rand Paul of Kentucky, a Trump ally and former Republican presidential candidate, is supporting former state Rep. Ron Hood.

The pro-Paul Protect Freedom PAC spent  nearly half a million dollars to run TV, digital, and radio commercials on behalf of Hood in the month leading up to Tuesday’s primary, according to AdImpact. A source close to Sen. Paul’s political team confirmed to Fox News a report from Politico that the ad blitz wasn’t sitting well with members of Trump world, some of whom unsuccessfully urged that the spots be taken down.

Some pundits saw the Texas results as a rebuke of the former president. And a second straight defeat of a Trump endorsed candidate – if it were to happen – would bring a tidal wave of stories questioning the former president’s sway over the GOP – especially in Ohio’s 15th Congressional District – which Trump carried by 15 points his 2016 presidential election victory and by 14 points in last November’s reelection defeat.

Longtime Republican strategist Colin Reed told Fox News that “during the slower days of summer, these special elections take on heightened importance for those trying to extrapolate out the future direction of the party. And as long as Donald Trump is out there, teasing the idea of another presidential race, everything he says or does – including involving himself in down ballot races – is going to be viewed through an increasingly heightened microscope.”

Reed, a veteran of GOP presidential and Senate races, noted that “if you’re going to get involved, it’s better to get a win, because even if these special elections don’t always pan out to be the canary in the coal mine, it becomes an unhelpful media and political narrative surrounding you if you can drag your horse across the finish line.”