President Trump suggested during a Florida rally early Monday that he may fire Dr. Anthony Fauci, the nation's top infectious disease expert, at some point after the election.

During the campaign rally in Opa-locka, Fla., Trump expressed frustration over the media's coverage of the coronavirus which remained prominent in the news due to a recent surge in cases.

His comments prompted chants of “Fire Fauci” from his supporters.

DR. FAUCI'S RESTAURANT-OWNING COUSIN WISHES HE WOULD EASE UP ON LOCKDOWNS

“Don’t tell anybody, but let me wait until a little bit after the election,” Trump told the crowd. "I appreciate the advice."

Forbes reported that Trump signed an executive order on Oct. 21 that creates a federal employee called “Schedule F,” which opens up these workers to the possibility of being easily fired by the administration. The report imagined that Fauci’s position as director of the National Institute of Allergy and Infectious Diseases could eventually be deemed a Schedule F position.

The comments by Trump came after Fauci recently criticized his administration's handling of the pandemic, as well as White House coronavirus advisor, Dr. Scott Atlas during an interview published by the Washington Post on Saturday.

Fauci told the paper that the coronavirus task force meets less frequently, and he no longer has regular access to the president, which was a significant change when compared to their relationship during the early stages of the outbreak. He also said the U.S. was heading for a challenging winter if more wasn't done to slow the virus's spread. 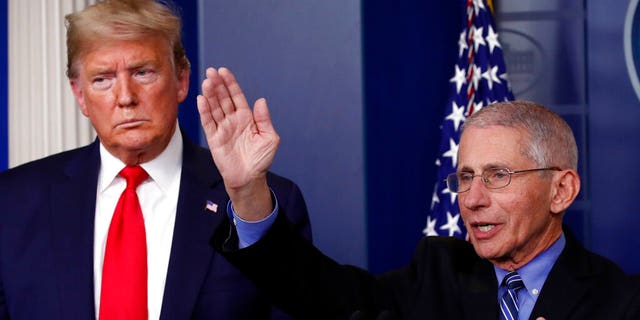 Fauci added that he believed Democratic presidential candidate Joe Biden was "taking it [the virus] seriously from a public health perspective,” while Trump was “looking at it from a different perspective," according to the Washington Post. He said the president's perspective was “the economy and reopening the country.”

Trump in recent days has stepped up his attacks on Biden for pledging to heed the advice of scientists in responding to the pandemic. He has insisted that the U.S. was "rounding the turn" on the pandemic, amid an alarming outbreak not seen since the spring.

In response to the interview, Judd Deere, a White House spokesman said that Trump puts "the American people first" and that Fauci decided to "play politics" near the election.

“It’s unacceptable and breaking with all norms for Dr. Fauci, a senior member of the President’s Coronavirus Task Force and someone who has praised President Trump’s actions throughout this pandemic, to choose three days before an election to play politics,” Deere told the Washington Post. “As a member of the Task Force, Dr. Fauci has a duty to express concerns or push for a change in strategy, but he’s not done that, instead choosing to criticize the President."

Last month, Fauci said he was "absolutely not" surprised Trump contracted the novel coronavirus. Soon after, the president said people were tired of hearing, "Fauci and all these idiots, these people."

As of early Monday, the coronavirus pandemic has seen more than 9,207,364 total cases and at least 230,996 deaths in the U.S., according to data from Johns Hopkins University.