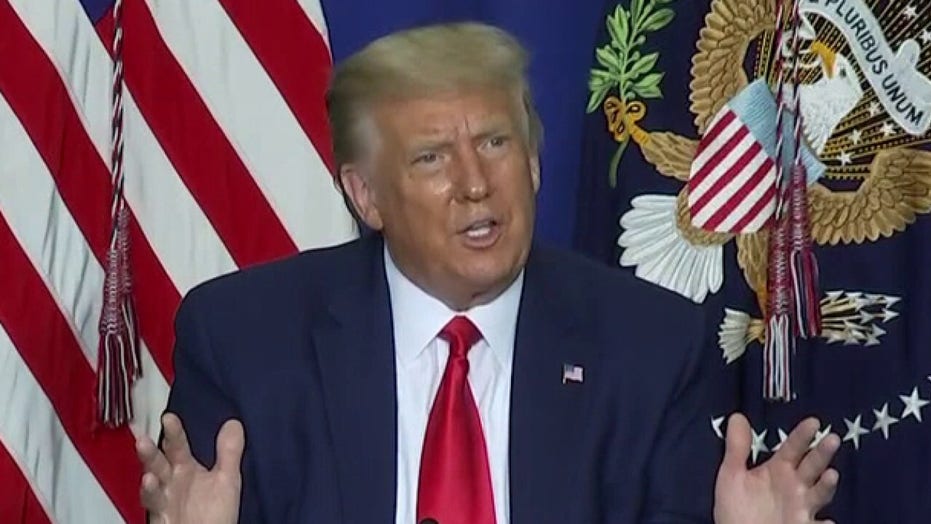 President Trump meets with law enforcement in Kenosha, despite pushback from state and local officials

EXCLUSIVE: The Trump 2020 campaign launched new ads in five key early voting states Wednesday — after a brief hiatus during the Democratic and Republican conventions – with a renewed focus on President Trump’s “law and order” message amid unrest in cities across the country.

A senior Trump campaign official told Fox News that the campaign had paused television ads in battleground states during the conventions, saying they “saw no sense in spending buckets of donor money” when they felt they were getting “free” ads from convention programming. The campaign's ads, though, stayed on national cable news through the conventions.

The new ads are set to go up in five early-voting states: Florida, Georgia, North Carolina, Wisconsin and Minnesota.

“That’s why we’re doing it,” the official told Fox News. “It’s a new approach because of the overwhelming number of people we anticipate will be voting early, so we’re focusing on those states.”

The ads set to air in Florida, Georgia and North Carolina will define Democratic nominee Joe Biden as “a tool of the radical left,” according to the official.

But the ads running in Wisconsin and Minnesota will speak directly to those “who have felt the impact of the violent mobs” amid unrest in their cities.

The ad set to air in Wisconsin, reviewed by Fox News, is focused on the unrest in Kenosha, Wis., which was sparked after 29-year-old Jacob Blake, a Black man, was shot at close range in the back by a city police officer, leaving him partially paralyzed.

The ad continues, slamming Democrats and “their calls for defunding the police,” saying that “would make it worse.”

The ad concludes with: “Communities, not criminals. Jobs, not mobs. Strong leadership when America needs it most.”

A similar ad is set to launch in Minnesota, focused on chaos in Minneapolis, which began in May after George Floyd died in police custody.

“Joe Biden is too weak and can’t call out the radical leftist rioters for what they are because he is under the control of the anti-police extremists in the Democrat Party,” Trump campaign communications director Tim Murtaugh told Fox News. “The rioters are running amok in Democrat-controlled cities and only President Trump is standing for law and order.”

Before that Biden also condemned similar violence in Minneapolis after Floyd died in the custody of that city's police department.

But Trump campaign officials this week are homing in on Minnesota, a state that hasn’t seen a Republican presidential candidate victory in decades.

“Elected Democrats in the Iron Range in Minnesota appreciate what the president has done for the economy there, and we believe Minnesota is ripe to put in the president’s column,” a Trump campaign official told Fox News. “Also, all of the violent rioting, which began in Minnesota, this is where people first began to see the left-wing violent mobs running amok in Democrat-controlled cities.”

The official was referring to a group of six Democratic mayors in Minnesota who, last month, endorsed the president for re-election, after claiming Biden hasn’t done enough to help working-class Americans.

“Today, we don’t recognize the Democratic Party,” the mayors wrote in the letter. “It has been moved so far to the left it can no longer claim to be advocates of the working class. The hard-working Minnesotans that built their lives and supported their families here on the Range have been abandoned by radical Democrats. We didn’t choose to leave the Democratic Party, the party left us.”

BIDEN'S CONDEMNATION OF RIOT VIOLENCE 'TOO LATE,' TRUMP SAYS; WHAT THE RECORD SHOWS ON DEMS' RESPONSE

Trump and Vice President Pence have recently visited Minnesota, where campaign officials say Biden is “definitely on the defense.”

“For Joe Biden to go to Minnesota as soon as he makes his first above-ground excursion, that says he knows he is on the defense,” a campaign official told Fox News.

"We've built a sophisticated organization that's connecting with voters in every corner of the state, who know that Trump's incompetent response to the pandemic has cost too many Minnesotans their lives, destroyed their jobs, and driven the strong economy Trump inherited from the Obama-Biden administration off a cliff," Ridder said in a statement. "Minnesota voters recognize that Joe Biden will unify our country, fight for working families, and help our economy build back better — and that's exactly why they are joining our campaign to win the North Star State in November."

Biden, according to the RealClearPolitics average, is leading Trump in Minnesota by 5.3 points.

The president, at this point, is down in the polls, both nationally and in the bulk of the battleground states he would need to beat Biden in November — but polling averages indicate that Trump may actually be in better shape in his race against Biden than he was at the same stage in 2016 against Hillary Clinton.

Trump has the incumbency advantage yet a controversial record to defend, especially on the coronavirus pandemic. But the numbers overall indicate that Trump remains competitive in several of the most important states to the Electoral College.

Meanwhile, Biden said he will resume in-person campaigning after Labor Day, with stops in some of the crucial general election battleground states.

Biden said he plans on holding in-person events after Labor Day “without jeopardizing or violating state rules about how many people can in fact assemble.”

“One of the things we’re thinking about is I’m going to be going up into Wisconsin, and Minnesota, spending time in Pennsylvania, out in Arizona,” Biden explained. “I’m going to be traveling throughout the country where I can do it consistent with the state rules about how many people can be assembled.”

According to the RealClearPolitics national average, Biden is leading Trump by 6.2 points.