Donald Trump’s new role as a hybrid property manager and social director at his Palm Beach resort essentially makes him a “bona fide employee” of Mar-a-Lago and qualifies him to live there, a lawyer for the former president argued Tuesday.

“This guy, as he wanders the property, is like the mayor of the town of Mar-a-Lago, if you will,” John Marion told the Palm Beach, Florida, Town Council. “He’s always present, he’s ever-present. And he loves it there. And he loves the people that he sees there.”

Trump has been living in the four-room, two-bath “owner’s suite” in the 126-room estate since leaving the White House last month, despite promising in 1993 that he would not if the town let him convert it from a residence into a members-only tennis and pool club.

Some neighbors and others in the town had complained that Trump was violating his agreement. Reginald Stambaugh, a lawyer representing next-door neighbors, said the town should enforce the terms of the deal by revoking the special use permit for the club and turning it back into a residence. “And then the former president and his family could live there,” he said.

Philip Johnston, a lawyer representing the group Preserve Palm Beach, said that Trump’s residence clearly violates the agreement and that Trump basing his post-presidential office there will bring problems for the town. “We feel that this issue threatens to make Mar-a-Lago into a permanent beacon to his more rabid, lawless supporters,” Johnston said.

But Marion pointed to the town’s zoning rules, which permit a business to serve as a residence for some employees who need to be there. He said Trump does everything from evaluating employees’ performance to attending events held there to greeting guests to suggesting improvements to the club’s operation to recommending candidates for membership.

The council took no formal action Tuesday and did not offer any indication on whether it might. Council President Maggie Zeidman, however, cited Town Attorney John Randolph’s concurrence with Marion’s opinion on the zoning rule exception. “It appears to me that Mr. Trump … has met the criteria for bona fide employee, and it seems that there is nothing therefore that would prohibit him from living in the owner’s suite at Mar-a-Lago,” she said. 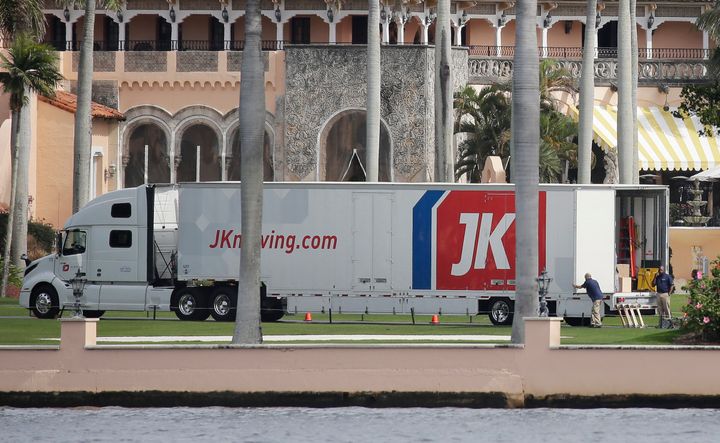 Trump bought Mar-a-Lago in 1985 as a winter residence but by 1993, facing financial woes because of his mismanagement of his Atlantic City casinos, found he could not afford the upkeep on the aging mansion. He sought and received special permission from the town to convert it into a for-profit social club.

One condition of that zoning exception, however, was that Mar-a-Lago could not be turned into a hotel, and the Town Council limited stays to no longer than seven straight days no more than three times a year. Trump’s lawyer at the time promised that Trump would abide by that rule, just like any other member.

But Trump began reneging on that promise almost immediately, according to those familiar with his habits in those years. During his presidency, Trump broke the seven-day limit in 2017, 2019 and 2020, and the three-visit limit in all four years of his presidency.

Marion, Trump’s West Palm Beach lawyer handling this issue, actually cited his repeated breaking of his promise through the years as a reason he should not be held to it now. “It has always been the case, before and after the execution of the Agreement in 1993, that President Trump has resided in the owner’s suite when at MAL, a use which has been far in excess of three visits per year and has never been challenged,” he wrote in a letter to Randolph on Jan. 28.

Trump could, if he wanted, avoid the dispute altogether by living at any of the three houses he owns in the immediate vicinity. Homes of 6,000 and 3,000 square feet are immediately adjacent to Mar-a-Lago, while a 10,000-square-foot oceanfront home is across Highway A1A, abutting Mar-a-Lago’s beach club.

But Marion in his presentation to the Town Council said this would be far worse for residents on the road immediately to the north of Mar-a-Lago, some of whom are represented by Stambaugh, as it would mean all cars turning onto the street would have to be inspected and there would be a constant Secret Service presence.

“It would be a horrible imposition for them if they got what they wanted,” Marion said.

The Mar-a-Lago property, which occupies several square blocks between Lake Worth lagoon and A1A, has its own private entrances for cars, and all the roadblocks and barriers that had been erected during Trump’s presidency have been removed.