Trump's iconic red, white, and black helicopter is almost as famous as the president himself. It could be found as a frequent guest on his hit television show and then on the campaign trail leading up to the 2016 presidential election. And in August, it appeared on the for-sale market by the Trump Organization after flying Trump and his family for 10 years, Time reported.

Canada's Aero Asset and California's Jet Edge Partners are leading the sale, with the latter's website showing that a deal for the aircraft is pending. If a sale goes through before Trump leaves office on January 20, 2021, at noon, the soon-to-be-former president will be left grounded. Well, at least when it comes to rotorcraft.

Registered with DJT Aerospace, a Dover, Delaware-based company, the helicopter is just one of many aircraft in the Trump fleet alongside Boeing 757 and Cessna Citation X private jets, as well a UK-based helicopter fleet. The unmistakable aircraft is registered as N76DT – the last two letters being a nod to its owner's initials – and had "TRUMP" emblazoned on the rear fuselage, though promotional material shows the lettering removed.

The Sikorsky S-76 is the epitome of a VIP helicopter preferred by charter operators and celebrities alike. Besides Trump, the S-76 can be found in the fleet of Queen Elizabeth II of England and was the helicopter of choice for the late Kobe Bryant, as Business Insider's David Slotnick detailed in January.

Take a closer look at N76DT.

Those in the market for a highly-specialized personal helicopter with a storied past can look no further than this one. 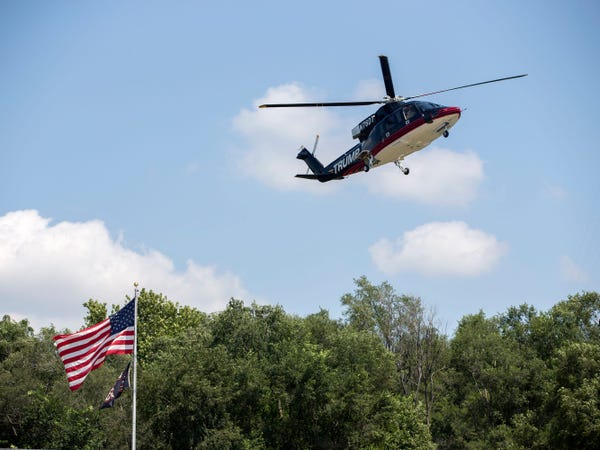 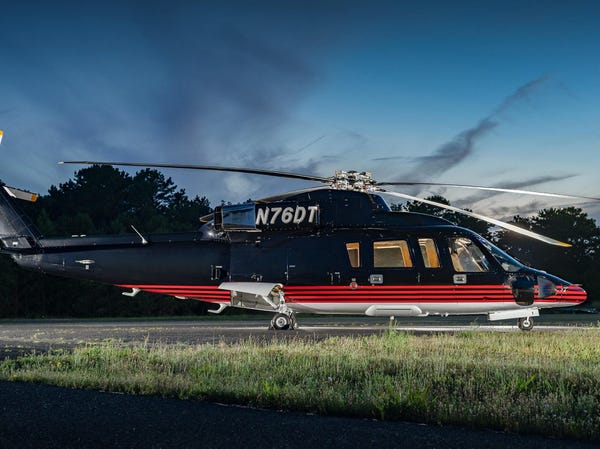 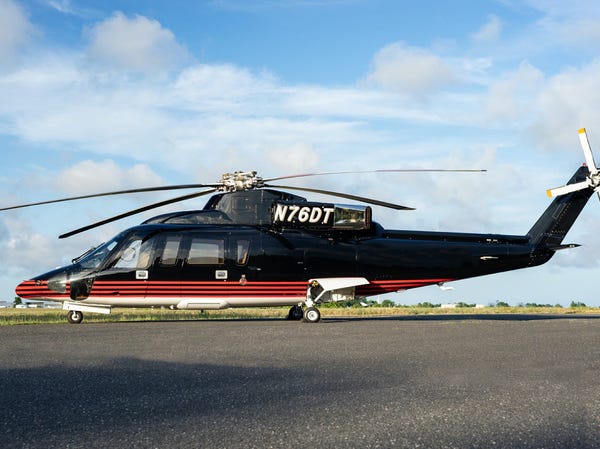 Ideal for short-haul travel, the S-76B has a range of around 260 nautical miles, making flights from New York to as far as Boston, Washington, and even Buffalo possible, under the right conditions. 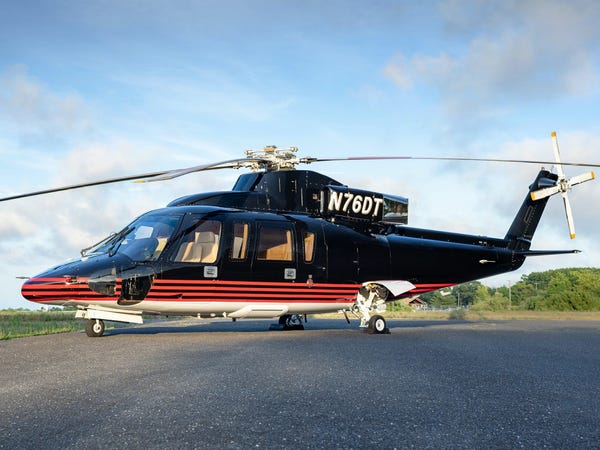 Trump has two more S-76 helicopters in his fleet, one more registered in the US and another in the UK servicing his golf resorts in Scotland. 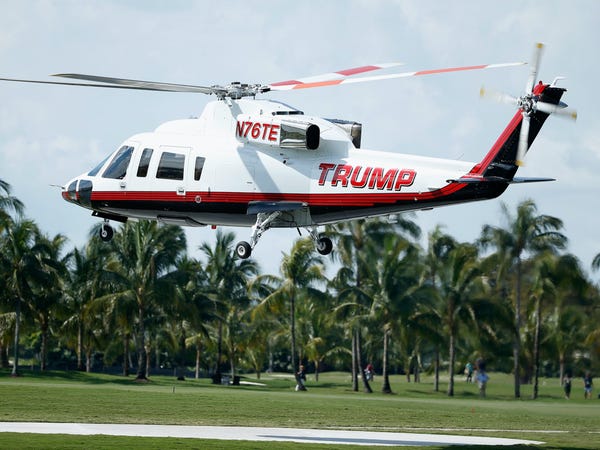 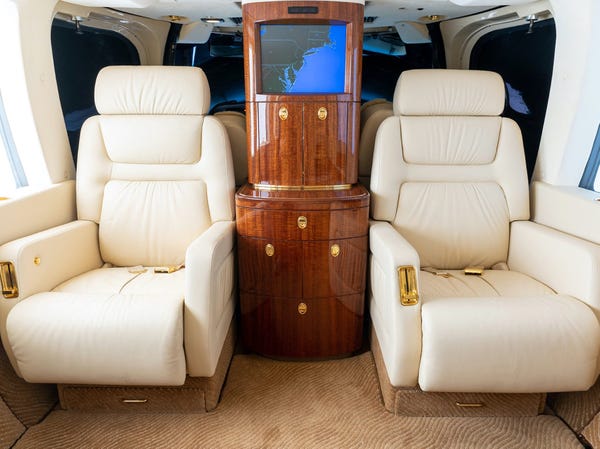 All the seats and even the door panels are covered in "ecru/almond" leather. 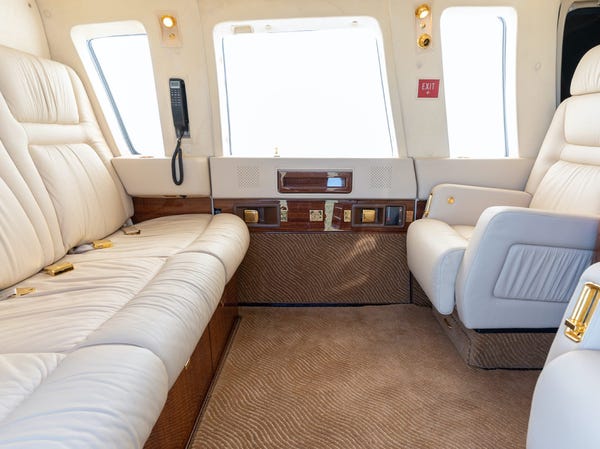 Gold fittings can also be found on the seat and the door panels, a Trump aircraft staple. 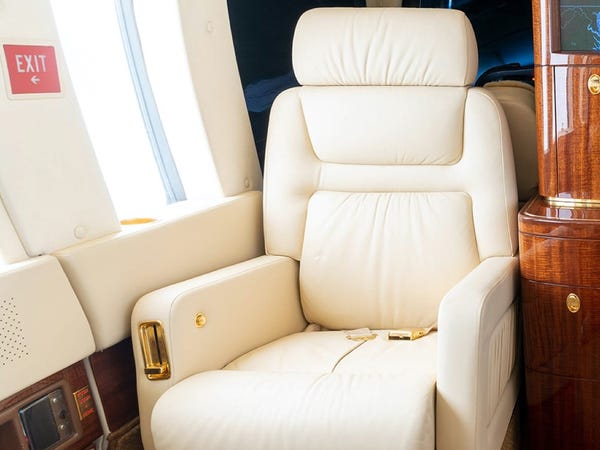 The central credenza is crafted in African mahogany and features a screen that displays the flight map. 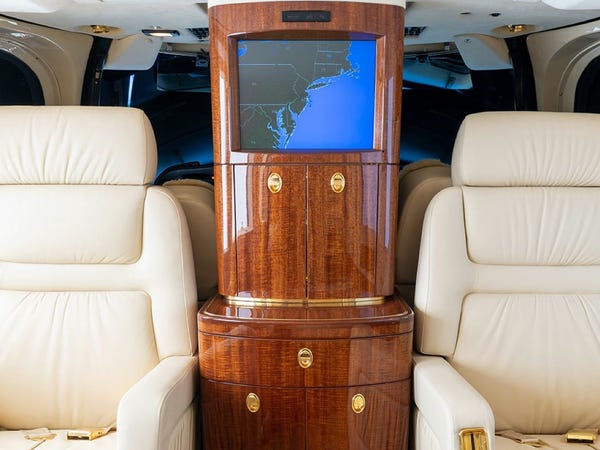 Underneath is where snacks and drinks are usually kept. 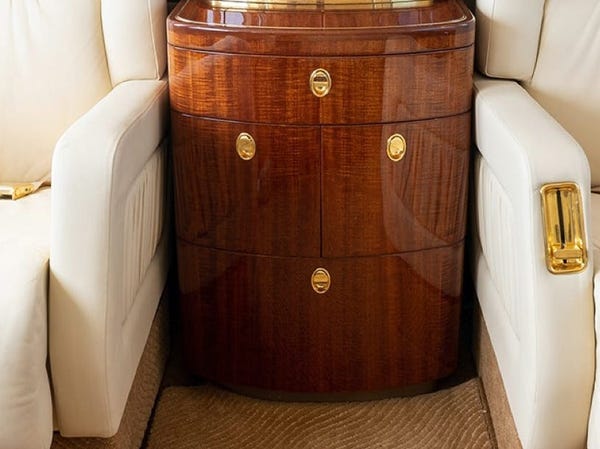 The headliner and window panels are covered in "cream ultra" suede while the carpet is custom-made from Scott Group, known as "dual tan Saint John's." 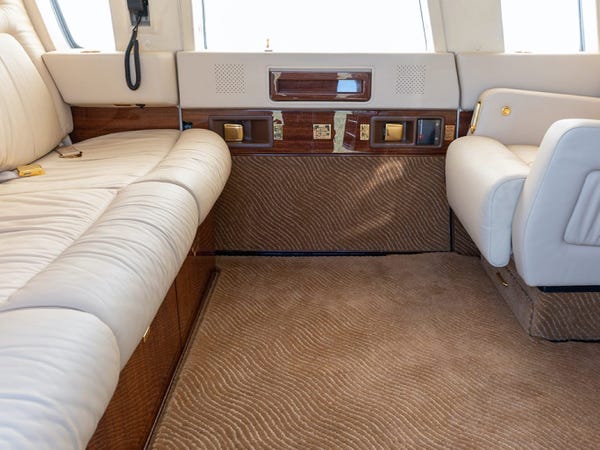 The divan is belted for four passengers but the center cushion can also fold down to create a table. There's also more storage compartments under here. 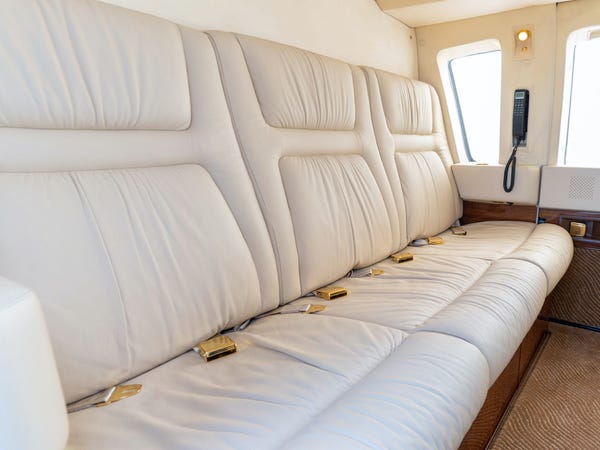 While typically flown with two pilots, only one is required to fly the S-76. 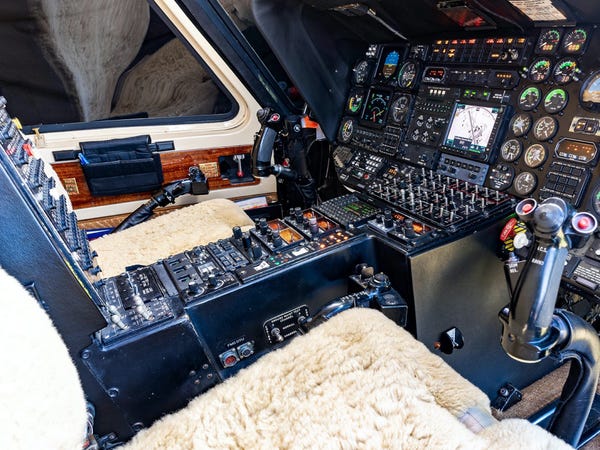 The avionics suite is also rated for flights under Instrument Flight Rules, meaning it can fly in the clouds. 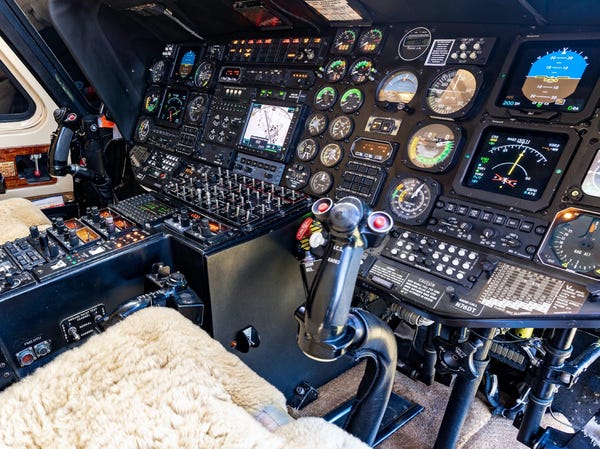 Using one of New York City's numerous heliports, it's a sub-10-minute flight to any of the area airports and a 30-minute flight to the Hamptons. In an hour, conditions permitting, you can fly from Wall Street non-stop to Martha's Vineyard. 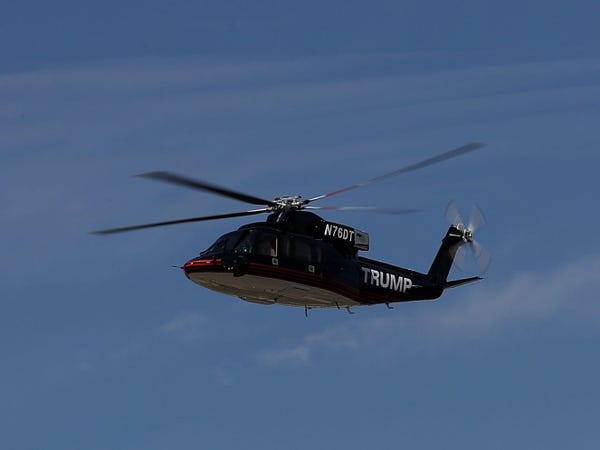 It's a luxurious way to travel, if one can afford it. CNBC reported the helicopter's cost to be around $7 million in 2010. 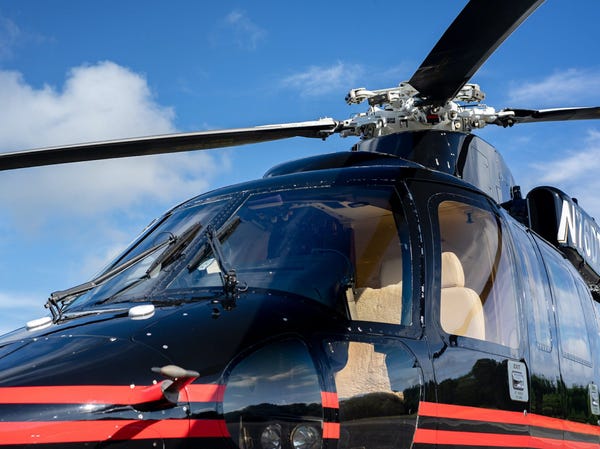 And while this model has only gotten older since Trump's purchase, the soon-to-be former owner has only grown in his celebrity, ascending from businessman, television reality star, and Manhattan socialite to president of the United States. 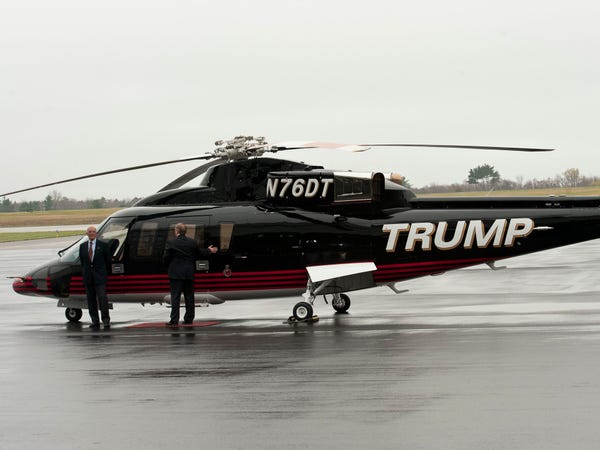 The helicopter was also a frequent sight on the campaign trail, used by then-candidate Trump for short hops around the New York area and nearby campaign stops in surrounding states. 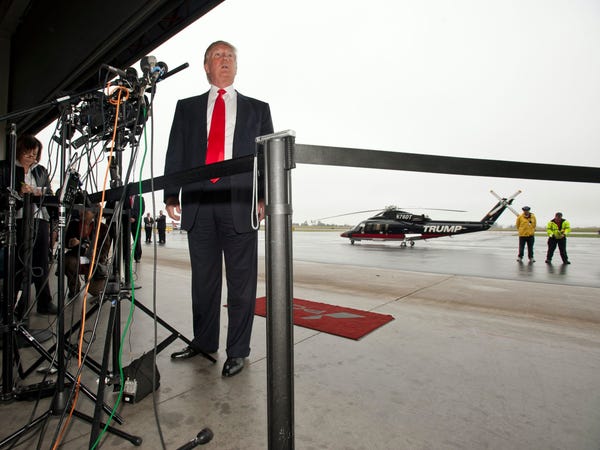 One of its last high-profile missions before Trump upgraded to Marine One was flying the candidate to the Republican National Convention in Cleveland. 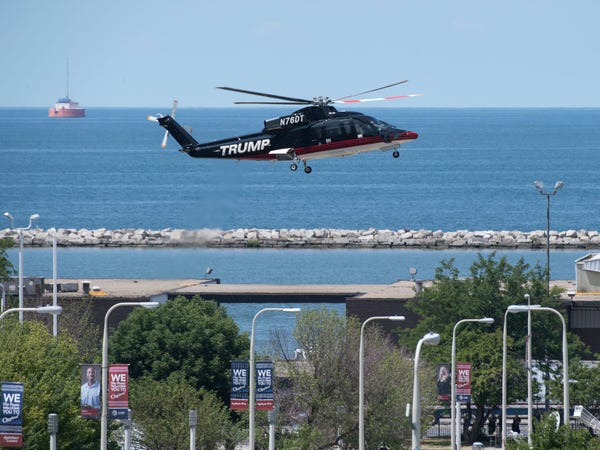 He had arrived earlier on his matching Boeing 757. The jet is not currently for sale. 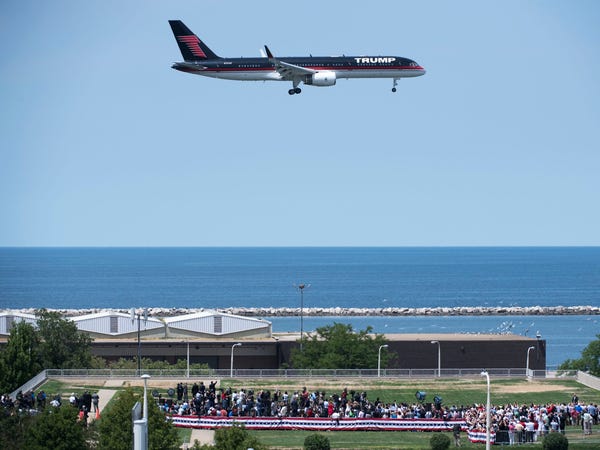 In Iowa the year prior, free helicopter rides were given to kids at the state fair. Trump won the state in 2016 and is projected to win it again in 2020. 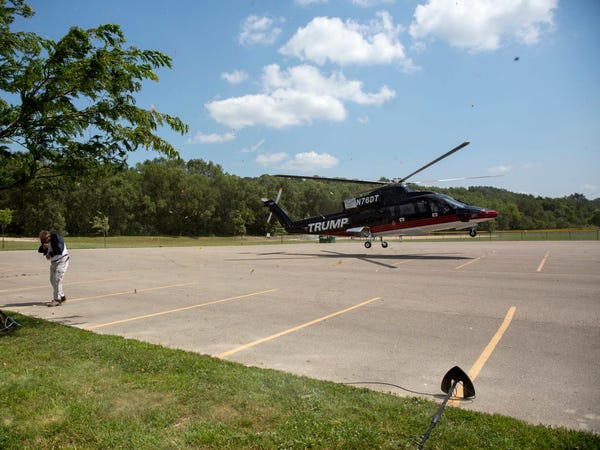 The helicopter was helpful in building the identity of the billionaire outsider that was pitching himself as going to shake up Washington. 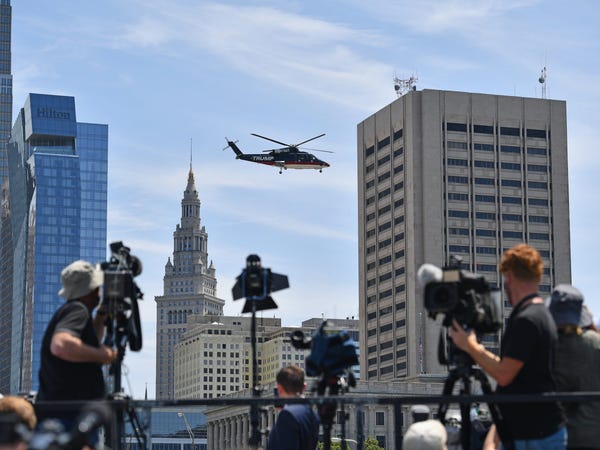 But since arriving in Washington, Trump hasn't flown on 76DT, trading up for Marine One. 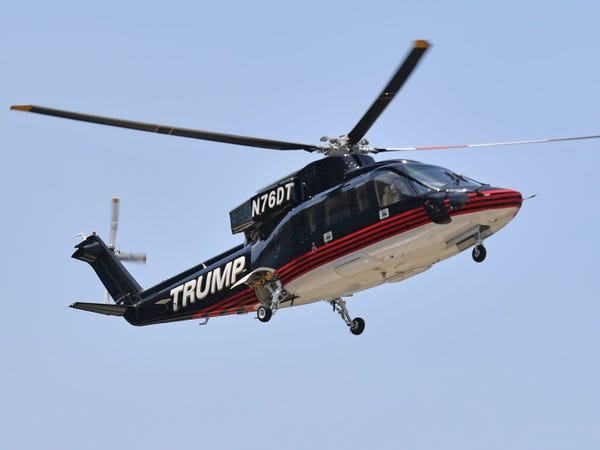 If a sale goes through before the end of Trump's presidency, the last helicopter flight he'll take for some time will likely be the traditional Marine One journey from the US Capitol Building to Andrews Air Force Base for the final flight home on Air Force One. 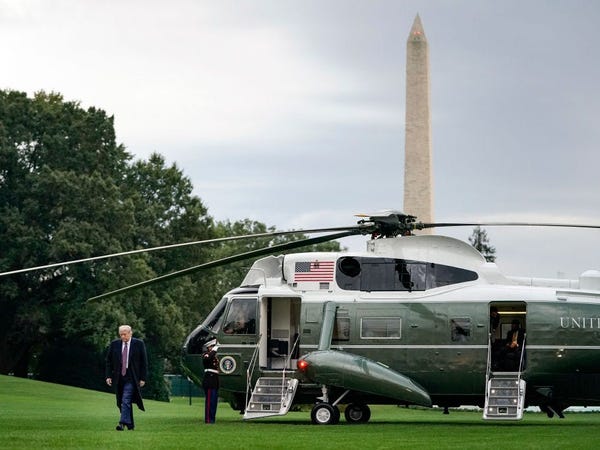 And a lucky buyer will get to purchase a piece of history as the owner of the only personal helicopter owned by a former president. 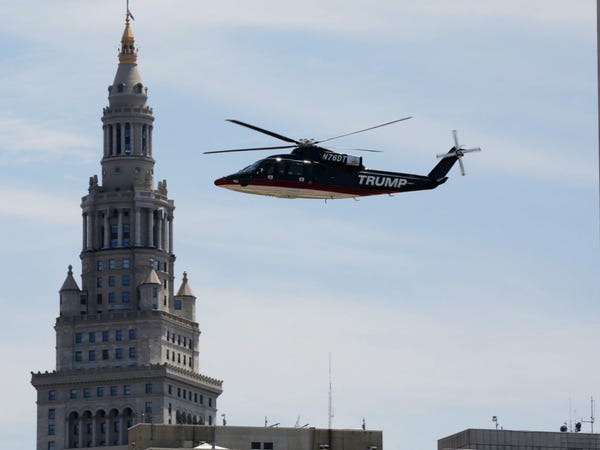