EXCLUSIVE – The top lawyer for former President Donald Trump in his lawsuits against Twitter, Google and Facebook over his bans from those platforms says that multiple factors make them “state actors,” meaning they’d be legally vulnerable under standards normally applied only to governments, like prior restraint.

In an exclusive interview with Fox News that lawyer, John Coale, argued that the government is essentially deputizing social media companies to censor Americans. And he predicted that the Supreme Court will eventually decide the case.

“The basis for all of this case is that private companies cannot be empowered by the government via Congress, via [Section] 230,” to censor people, Coale said. “The Biden administration and members of Congress can’t delegate what they cannot do themselves.”

He added: “This issue will in the end be decided in the Supreme Court, it’s that important.” 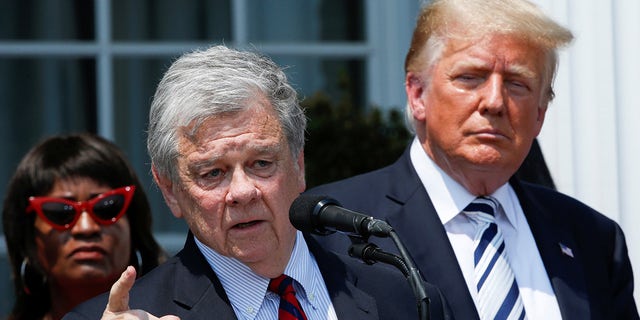 In addition to the initial complaints, Coale and his legal team last week filed a motion for a preliminary injunction against Google – which owns YouTube – to force the company to allow Trump back on its platform.

In all of those documents the main thrust of the Trump team’s arguments is that the companies can be treated like the government in law because they are allegedly taking actions based on pressure, encouragement or willfully in concert with the government. They cite cases that allegedly support this, although they are not perfect fits for facts as the examples are mostly not in the context of speech rights.

“There’s three tests and if they flunk one test, they’re government actors,” Coale said. “The first is if … government officials be they congressmen, senators or people in the executive branch threaten these companies – they did it at congressional hearings, they did it in the media and we show examples of that in the preliminary injunction.”

“The other thing is, if the government encourages censorship that is unconstitutional,” Coale added. “The third test is if … the private company is doing the bidding of the government, and they are. We had Biden’s press secretary confirm that last month when she said that they’re working closely with Facebook to prevent misinformation on the virus.”

Last week’s motion for a preliminary injunction includes several examples of alleged pressure, encouragement and cooperation between the company and government officials.

Trump’s lawyers also say that the social media companies’ allegedly inconsistent application of their standards reduces their protection under doctrines like Section 230. The motion highlights comments made by Democrats on social media platforms that Coale and his team argue are similar to or worse than comments by Trump, revealing an inconsistent application of standards.

One of the examples is a June 2018 comment from House Speaker Nancy Pelosi, D-Calif., asking why there “aren’t uprisings all over the country” over the treatment of children on the southern border. Another is a 2020 comment from Vice President Harris, then a senator, condemning violent protests but saying that protests over police brutality are “not going to let up – and they should not.”

Despite the confidence from Coale that the Supreme Court will hear and decide the case, most experts believe Trump’s case is legally dubious. They say it is simply impossible for a company to violate a person’s constitutional rights because the Constitution does not apply to private entities – and by extension, a principle like prior restraint cannot be applied to private companies either.

“I don’t think the lawsuit has much chance of success because it first and foremost accuses the companies of violating the U.S. Constitution, and the U.S. Constitution only restricts government,” Vanderbilt Law School professor Brian Fitzpatrick told Fox News when Trump’s lawsuits were first filed in July.

“All of us benefit in some way from some law but that does not transform all of us into the government,” Fitzpatrick added about arguments that the companies are state actors because of certain government actions, in particular their benefits from Section 230. “It has zero chance of success. I think it’s mainly for publicity, it’s not to get real relief in a court.”

“Government cannot wave a wand and say ‘you’re public now,'” Shoshana Weissmann of the libertarian R Street Institute told Fox News at the time as well. “[G]overnment pressuring companies or companies taking cues from government entities also does not magically turn them into government actors… This is a full misunderstanding of how the law works.”

Coale told Fox News his team is likely to file motions for preliminary injunctions against Twitter and Facebook as well over their bans of the former president. Any appeals from the lawsuits, which are filed in district courts in Florida, would go to the 11th Circuit Court of Appeals.

Then any emergency appeals from there would go to Justice Clarence Thomas based on geography. There is a strong chance that the litigation could drag on for years, especially as Trump continues to weigh a run for president in 2024.