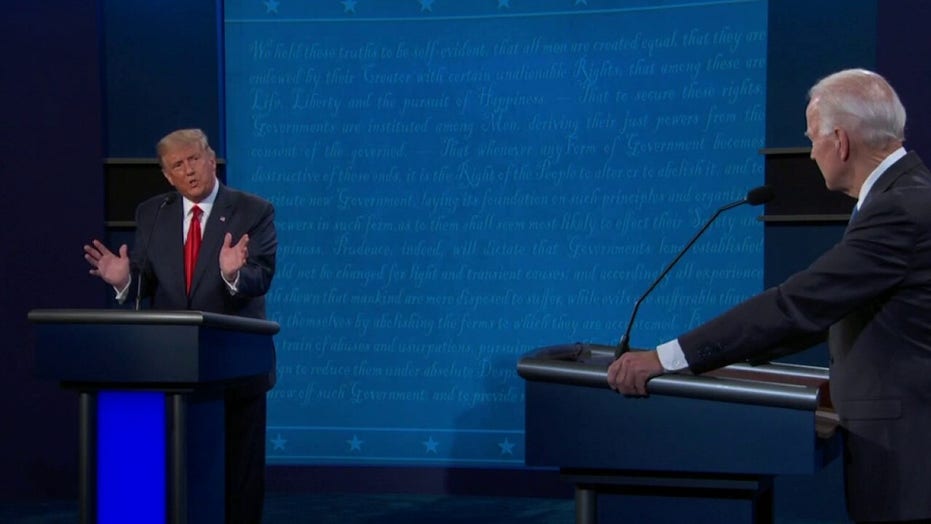 Trump tells Biden: ‘I ran because of you’

President argues the Obama-Biden administration accomplished nothing while in power

During their debate in Nashville, Tenn., Trump accused Biden of embracing a radical environmental agenda that would ban fracking and destroy the oil industry.

"He was against fracking," Trump said. "He said it … until he got the nomination, went to Pennsylvania, then he said — but you know what Pennsylvania, he'll be against it very soon because his party is totally against it."

The exchange highlighted a point of contention that has come up numerous times in the race as fracking has been credited with providing hundreds of thousands of jobs in the U.S.

During a 2019 Democratic primary debate, Biden was asked whether there would be "any place for fossil fuels, including coal and fracking, in a Biden administration?"

Biden's response: "No, we would — we would work it out. We would make sure it's eliminated and no more subsidies for either one of those, either — any fossil fuel."

During Thursday's debate, Trump pressed Biden on whether he would shut down the oil industry.

"I would transition from the oil industry, yes," Biden responded.

Biden has also endorsed the Green New Deal, which calls, among other things, for dramatic reductions in carbon emissions by 2050. Conservatives have criticized the plan, arguing it would impose burdensome costs on U.S. families and businesses.

The Heritage Foundation attempted to use the Energy Information Administration's National Energy Model to forecast the impact of steep carbon taxes aimed at reaching the net-zero greenhouse gas emissions. Not only did the model crash, it failed to approach anywhere near the goal outlined in the "GND." The closest Heritage was able to get was a 58 percent reduction in emissions, achieved through a $300 carbon tax  – taxes above $300 crashed the EIA's model.

However, Biden and others on the left maintain that the country faces catastrophic consequences if it doesn't act to combat climate change. They've also forecasted massive economic benefits from the associated investments in infrastructure and other energy projects.

Sen. Bernie Sanders, I-Vt., who also endorsed the Green New Deal,  previously warned that without action on climate change, the U.S. would "lose $34.5 trillion by the end of the century" and predicted savings as high as $70.4 trillion over 80 years by "averting climate catastrophe."