“Jody has been a steadfast fighter for conservative Georgia values and is a staunch ally of the America First agenda. Unlike the current Georgia Secretary of State, Jody leads out front with integrity. I have 100% confidence in Jody to fight for Free, Fair, and Secure Elections in Georgia, in line with our beloved U.S. Constitution,” the former president said in a statement released by his Save America PAC.

“Jody will stop the Fraud and get honesty into our Elections! Jody loves the people of Georgia, and has my Complete and Total Endorsement,” Trump emphasized. 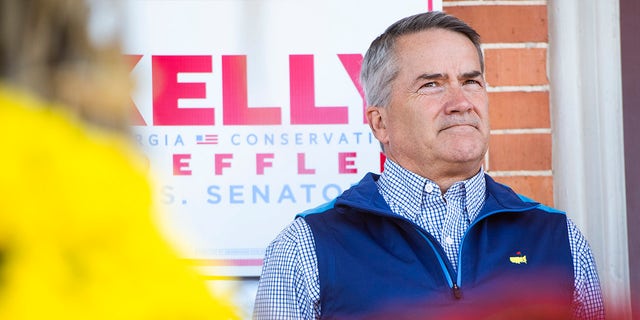 Rep. Jody Hice, R-Ga., appears at a rally with Sen. Kelly Loeffler, R-Ga., who is running for reelection, and former ambassador to the United Nations Nikki Haley, at Walton County Historic Courthouse in Monroe, Ga., on Oct. 30, 2020. (Photo By Tom Williams/CQ-Roll Call, Inc via Getty Images)

Trump narrowly lost Georgia in last November’s presidential election, being edged out by then-Democratic nominee Joe Biden by less than 12,000 votes. Biden became the first Democrat to win the state in a White House contest in more than a quarter century.

The ballots in Georgia were counted three times – the original Election Day count, a mandatory hand recount, and a recount requested by the president’s campaign.

Trump refused to concede to Biden and claimed for two months that there was massive voter fraud in Georgia and five other states where Biden narrowly won. Dozens of legal challenges by the president and his allies were shot down, and then-Attorney General William Barr said his Justice Department had not seen fraud on the kind of scale that could flip the election.

Trump repeatedly attacked Georgia Gov. Brian Kemp and Raffensperger – who are both Republicans who supported Trump – for refusing to aid his attempts to reverse Biden’s razor-thin victory in the state.

The then-president appeared to pressure Raffensperger in an early January call when Trump urged Raffensperger to “find” enough votes to revers Biden’s victory. As a result of that conversation, Georgia prosecutors are now investigating whether Trump improperly tried to influence the election results. Raffensperger told Trump at the time that his data was wrong and that “we believe our numbers are right.”

Hice, in a statement on Twitter, said “I am honored to have the endorsement of President Donald Trump! His priority has always been America first!”

The congressman linked to a site where supporters could donate to his campaign to unseat Raffensperger.

“Free and fair elections are the foundation of our country,” Hice said in a separate statement. “What Brad Raffensperger did was create cracks in the integrity of our elections, which I wholeheartedly believe individuals took advantage of in 2020.”

Hice was elected to Congress in 2014 – representing Georgia’s 10th Congressional District – which stretches south and east from Atlanta’s outer suburbs. He’s a strong Trump ally who supported the then-president’s attempts to overturn the election results and was a fierce opponent of the push to impeach Trump of inciting the Jan. 6 insurrection at the U.S. Capitol by right-wing extremists and other Trump supporters.

Trump, who retains plenty of clout over GOP politicians and who remains extremely popular with Republican voters, is continuing to play a kingmaker’s role with the party.

The former president is vowing to seek retribution against GOP lawmakers in Congress who voted to impeach or convict him – and against Republicans like Raffesperger who refused to help his efforts to overturn the election – by supporting primary challenges when those Republicans are up for reelection in 2022.