WASHINGTON ― Weeks after Congress passed the $2 trillion coronavirus stimulus bill, Native American tribes still aren’t getting badly needed aid because the federal agencies in charge of distributing emergency relief to tribal governments don’t know how to work with them and aren’t listening to what they actually need, a key U.S. senator charged.

The Treasury Department, for one, is tasked with distributing $8 billion to tribal governments to help them stabilize economically amid the pandemic. But none of that aid has moved, as the agency, which doesn’t otherwise interact with tribes, is bogged down in consultations with tribes in order to come up with a formula for distributing the funds. Treasury has a statutory deadline of April 24 to get all the money out the door.

“We’ve run into some serious problems,” Sen. Tom Udall (D-N.M.), the vice chairman of the Senate Indian Affairs Committee, said in a recent interview. “Treasury is not familiar with tribes. They don’t know how to interact in the appropriate way with tribes and they’re just not getting the job done.”

Meanwhile, the Small Business Administration has been overseeing $350 billion in emergency payroll relief to small businesses. But tribal businesses have been at a huge disadvantage all along because the SBA decided that some casinos ― the financial lifeblood of many tribal governments ― wouldn’t be eligible for relief. Specifically, the agency relied on an existing regulation that prohibits small businesses from getting federal aid if they get one-third of their revenue from gaming activities.

When tribes protested and members of Congress told the agency they never intended for that regulation to be applied for emergency relief, the SBA issued new guidance this week that changed nothing in terms of tribal casinos qualifying for aid. And now the funds are all gone anyway.

The stimulus bill made it “very clear” that any tribal business would be eligible for payroll relief, Udall emphasized. “The SBA did not see it that way or didn’t know enough about Indian affairs, public policy or Indian law, and relied on a regulation that simply didn’t fit.”

“It has very real consequences,” he added.

The Treasury Department and the Small Business Administration did not return requests for comment.

Tribal governments are struggling with these bureaucratic roadblocks at a time when their gaming operations have been shuttered for weeks, affecting 246 tribal nations that own 500 gaming facilities. An April 7 analysis by Meister Economic Consulting concluded that these casino closures have already resulted in 296,000 people losing their jobs, $1.5 billion in lost economic activity for tribal governments and $332 million in lost wages.

At least federal agencies have been consistent? Tribes have been forced to jump through hoops to get aid from all three of the emergency coronavirus bills passed by Congress.

The first two bills required tribes to go through the Centers for Disease Control and Prevention for aid that should have been directly routed to tribal governments. Because of the added layer of bureaucracy, tribes still have to fill out multiple rounds of applications to access their money to fight the spread of COVID-19. It is adding weeks to the process of tribes getting help.

“I’m hearing from tribes I’m on the phone with that they can’t fill all these things out fast enough and they need the money now,” said Udall. “That’s the crux of the problem. That’s the red tape.”

In the latest bill, the $2 trillion stimulus package, the White House initially tried to cut tribes out altogether. Senate Democrats, led by Udall, fought until literally hours before the bill was voted on to get tribes about $10 billion in aid. Of that, $8 billion is for the tribal fund being overseen by the Treasury Department and $2 billion is in additional appropriations for federal agencies that serve Native communities, like the Indian Health Service and the Bureau of Indian Affairs.

It’s a historic amount of direct aid for tribes in an emergency spending bill. But it’s a drop in the bucket when you consider what they are up against with COVID-19.

Never mind that the National Congress of American Indians, the largest organization representing the interests of tribal governments, told Congress in mid-March that tribes would need at least $20 billion in direct relief for economic stability ― more than double what they got. Tribal communities are among the most vulnerable to a rapid and devastating spread of the coronavirus.

Native populations have some of the highest rates of health conditions like diabetes, heart disease and asthma, all of which leave them more susceptible to the coronavirus. Tribal communities are often in remote parts of the country, where it’s tough to quickly disseminate resources, and where families live in small homes shared with elderly family members particularly at risk of getting COVID-19. And the Indian Health Service, which provides health care to nearly 3 million Native Americans, is already notoriously and chronically underfunded.

Put those pieces together and it’s not hard to imagine how quickly this could become a disaster.

“It is a perfect storm,” said Udall. 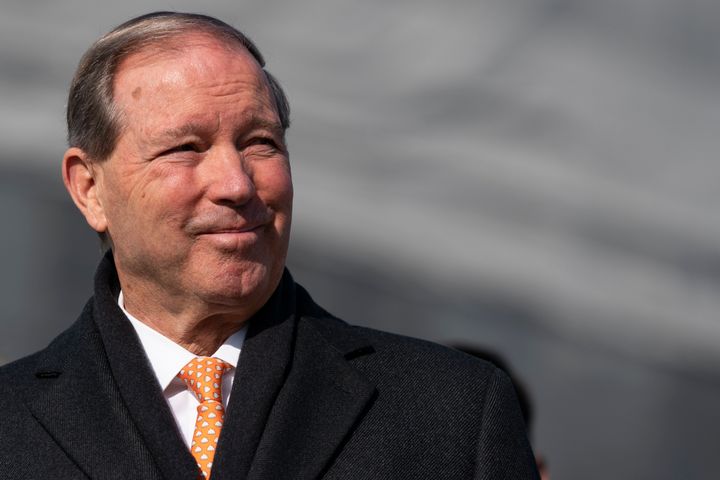 There are already unsettling numbers coming out of the Navajo Nation, the largest reservation in the country with a population of more than 350,000. It reported Monday that it has more confirmed cases of COVID-19 per capita than almost every U.S. state, behind only New York and New Jersey. Its number of cases surged 367% in two weeks, jumping from 174 on March 31 to 813 on April 14.

Navajo Nation President Jonathan Nez said earlier this month that the U.S. government “once again has ignored” Indigenous people by failing to deliver resources to fight the coronavirus. The tribe has all but given up on getting federal help anytime soon. Nez said the tribe is spending $4 million of its own funds to try to deal with the emergency and keeping the receipts to send to the federal government later.

Part of Navajo Nation is in Udall’s state. The reservation is “a burning hot spot in the country” for COVID-19, he said, but noted that smaller tribes in his state are getting hit, too. One tribe, the Zia Pueblo, only has about 1,000 members and as of last week had about 15 confirmed cases of COVID-19. That’s a much higher confirmation rate per capita than the 1 or 2 people per 1,000 people found in nearly all other states.

For the moment, the most important thing the federal government can do to support tribes is pick up the pace in distributing tribal stabilization funds, said Udall. Not that tribes are surprised that it’s been such a challenging process.

“For Indian Country, the struggle is to get their fair share of federal resources, and this is not a new problem,” he said. “That’s part of the reason why this is such a dangerous time for Native communities: They’ve been left behind by the federal government.”