Major winemaker Treasury Wine Estates has warned investors its performance in markets heavily impacted by the pandemic is running behind expectations as lockdowns and soaring case numbers continue to hinder sales.

Treasury, which makes wine brands such as Penfolds and 19 Crimes, is holding its annual general meeting today. In a speech posted to the market this morning, chief executive Tim Ford told shareholders while overall performance through the first quarter of fiscal 2022 was solid, parts of the business were not performing as well as hoped. 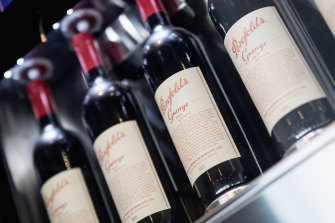 Mr Ford pointed to the company’s key luxury channels in America, Australia and Asia where the COVID-19 pandemic is still causing delays in the recovery of wine consumption in bars, pubs and restaurants.

He said this issue was particularly prevalent in the US, where re-openings were continuing at a “gradual pace”, slower than the company had anticipated.

“In Australia … extended lockdowns in Sydney and Melbourne have resulted in the closure of the on-premise channel, delaying our execution plans outside of the large retailers, particularly for Penfolds,” he said.

“While the momentum in these channels is slightly behind, we remain confident that as vaccination programs gain momentum and restrictions ease across these key premium and luxury wine sales channels that we are well-placed to execute our plans to deliver growth.”

In lieu of these channels being open, online and e-commerce sales have somewhat filled the gap, he said, but noted that growth rates were down on last year.

Treasury has also seen, like many other retailers, significant disruption to its supply chain and logistics systems due to the pandemic. Mr Ford said shipping delays and container availability issues were becoming “more pronounced” and that he expected the challenges would be ongoing.

“Globally, our underlying business is performing in line with expectations, however the pandemic related factors will continue to have a bearing on our performance in the short term,” Mr Ford said.

Sales of its premium Penfolds range have also remained consistent, with Mr Ford saying the company had successfully reallocated all the sales it lost after China, Treasury’s largest market, unexpectedly slapped tariffs of up to 200 per cent on Australian wine.

In his address to shareholders, chairman Paul Rayner said the company remained committed to the Chinese market in the long term despite its “effective closure” in 2019, and appeared to call on the Australian government to do more to repair its frayed relationship with the country.

“Trust is critical to building relationships and brands and is therefore essential to our long-term success,” he said. “I think this will be particularly important in the post-COVID world, as governments consider how they stimulate domestic economic recovery and the role of international trade relationships in driving economic growth.