New York (CNN Business)Tom Cruise recently unleashed a profanity-filled tirade on the set of the upcoming “Mission: Impossible 7” after the star of the film reportedly became enraged at crew members for not adhering to social distancing measures.

The UK’s Sun newspaper reported on an audiotape Wednesday in which Cruise can be heard yelling, “They’re back there in Hollywood making movies right now because of us! Because they believe in us and what we’re doing” and “We are creating thousands of jobs you m*therf**kers.”
Although Cruise perhaps acted inappropriately, behind the actor’s yelling and cursing lies a deeper and true point: The coronavirus pandemic has ravaged Hollywood, and it continues to be a significant problem for making movies — especially when it comes to cost.

Though the global health crisis has rippled throughout the industry in many ways, the most obvious is the rise in production expenses to keep staff safe.
The Los Angeles Times reported in May that estimates for “enhanced cleaning and staffing for coronavirus prevention could add more than $1 million to a typical movie budget.” For some smaller studios, that could be a nonstarter.

The film industry has been through many challenging times, including economic depressions and world wars. But those events arguably led more people to the movies for comfort. This pandemic has had the opposite effect, keeping people away from theaters, delaying films and stalling productions. No studio ever could have imagined facing such hurdles.
Even though “Mission: Impossible 7” is a huge film with a massive budget made by a giant studio, Covid still creates financial problems for the movie, and the several companies that are working on it.
For example, Paramount is a prominent studio owned by ViacomCBS (VIACA), but not every studio in Hollywood has the benefit of blockbusters like the Mission: Impossible franchise. Many smaller companies could be fighting for survival the longer the movie drought goes on.
Also, “Mission: Impossible 7” is no typical movie. It’s an action film with many elaborate stunts and exotic locations. The last film in the series, “Mission: Impossible — Fallout” cost $178 million to produce, according to Variety. 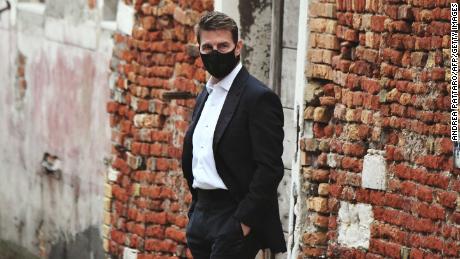 If its production is shut down, it would stall a film that has already been put on hold before. It’s not easy or cheap to stop and restart a production, especially one of this size. It would force the studio to shift money for marketing and spend extra to resume production. That would hurt the studio’s bottom line, but more importantly, it can hurt the jobs of the people who work on the film from the cast to the crew.
Hollywood has already seen how a Covid diagnosis can shut down a major production, with “The Batman” — shooting in London, like “Mission: Impossible 7” — temporarily halted when star Robert Pattinson tested positive.
Guilds and unions have been crying out for relief for months, especially over the summer, when safety concerns left many below-the-line workers (that is, those in technical or support jobs) out of work, scrambling to make ends meet.
And if movie productions are put on hold because of outbreaks, there’s ultimately no product for movie theaters to show.

That’s what has been happening all year long in the entertainment business. Major theater chains like AMC (AMC) have closed and then reopened with health measures, but they don’t have a lot of movies to attract theatergoers. So audiences mostly stayed away, which has led to the domestic box office being down nearly 80% from last year according to Comscore (SCOR).
So, yes, Cruise’s eruption may have been uncalled for, but yelling and cursing aside, it underscores how badly the pandemic has hurt the entertainment industry — and that there’s still a ways to go before any sort of Hollywood ending.
Source: Read Full Article