(CNN Business)Heat waves are becoming more common in parts of the United States — and that means more people running their air conditioners for longer. But those air conditioners can make the problem worse, emitting greenhouse gases as they work that contribute heavily to climate change.

SkyCool Systems is trying to break that vicious cycle, using technology that promises to offer buildings an alternative means to cool down by essentially mimicking how the planet cools itself.
“Our planet naturally cools itself by sending heat out in the form of infrared light or radiation,” said Eli Goldstein, SkyCool’s cofounder and CEO, through a process known as radiative cooling.

“We’re using that effect to essentially radiate heat out and out during the day and at night, even under direct sunlight.”

The five-year-old company said it does this through rooftop panels made using nanotechnology. These panels consist of an optical film that radiates infrared light and cools itself in the process. They resemble solar panels but actually do the opposite, reflecting 97% of the sunlight that hits them and cooling the surface below, according to the company.

SkyCool’s model involves embedding a network of pipes below those panels. These pipes are filled with water, which is kept cool by the panels and then flows into a refrigeration or air conditioning system. This process is designed to take pressure off the system’s cooling mechanism. And because the panels cool naturally and don’t need external power to function, it helps the entire system use less electricity. 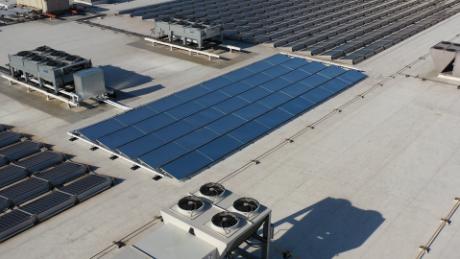 A Grocery Outlet store in Stockton, California, which has been using SkyCool’s system since last year, says it saw a marked drop in its electrical bills.
“After we had our SkyCool system installed, our electricity company increased their rates on us,” Jesus Valenzuela, the store manager, told CNN Business. “We actually didn’t see our bill go up at all. In fact, we saw it go just a little bit down,” he added. Valenzuela estimates that the panels have saved his store roughly $3,000 a month.
Scientists have been researching the benefits of radiative cooling for years, including Goldstein’s co-founder and UCLA professor Aaswath Raman, who is a pioneer in the field. Several solutions and models to harness the process have been proposed in recent months.
But there are some challenges, including a constraint familiar to the solar industry: it doesn’t work as well without sunlight.
“Our technology works best in hot, dry climates where the sky is clear, so when you have clouds, that blocks that radiative cooling window,” Goldstein said. “In the same way that [carbon dioxide] blocks light and sort of has that heat trapping effect, water vapor also will block infrared light.”
But perhaps the biggest obstacle to making the technology ubiquitous is its relatively high cost. Most radiative cooling solutions “suffer from a high manufacturing cost and large-scale production limits,” researchers at China’s Fudan University wrote in a paper published in the journal Nature earlier this year. 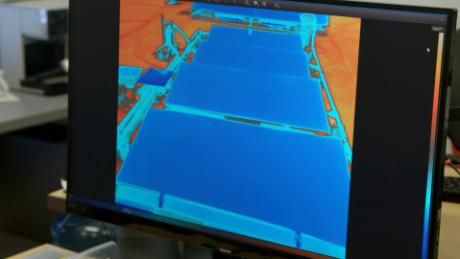 Goldstein declined to reveal exactly how much SkyCool’s panels cost but acknowledged that they are currently “more expensive” than solar panels.
“New technologies like radiative cooling are often more expensive,” he said. “People are very sensitive to first cost, and so that is another barrier to getting new things out there.”

Much of that is because of low production volumes, he said. Scaling up production could help bring the cost down, Goldstein said, particularly for developing countries in Asia and Africa where SkyCool hopes to eventually expand. For now, the company is focused on commercial applications of the technology, though it hopes to start installing panels on the roofs of individual homes. It has installed panels at other locations around California, including a retail store and a data center.
“We’re just excited to be able to use this new technology for good,” Goldstein said.
Source: Read Full Article