President Biden is hitting the road again – getting out of Washington for the second time this week as he makes the case for his top priority in the early days of his administration – a $1.9 trillion COVID relief package.

Biden on Friday visited Pfizer’s COVID-19 vaccine manufacturing facility near Kalamazoo, Michigan. Increasing vaccinations is a crucial element in the president’s recovery plan. The stop came two days after the president held a town hall in Milwaukee, Wisconsin on Wednesday, where Biden pushed his proposal, which has seen GOP pushback over the price tag.

Michigan and Wisconsin also happen to be crucial battleground states where Biden narrowly edged out then-President Trump in his presidential election victory. 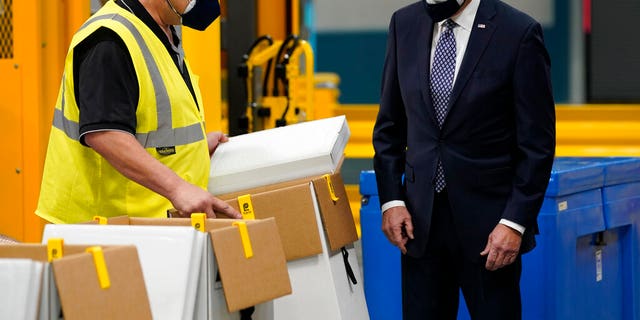 The itinerary this week has some political pundits wondering if a 2024 re-election is on the mind of the president and his political advisers.

But a longtime Democratic strategist and veteran of presidential campaigns said these trips are all about passing the rescue package – with maybe a touch of 2022 midterm election politics added in.

“These states check several boxes. You have unemployment numbers that are slightly above the national average. In Wisconsin, you have competitive Senate and gubernatorial races that are going to heat up. There’s political reasons and real policy reasons, and the rescue package resonates in these midwestern rust belt states in a particular way,” noted the strategist, who asked to remain anonymous to speak more freely.

There’s been widespread speculation ever since Biden launched his 2020 presidential campaign nearly two years ago that he might only serve one term. Biden made history last year as the oldest person ever elected president – and if he ran for re-election and won, he’d be 82 at the time of his second inauguration.

But a longtime Biden ally and supporter says the president is “planning to run again.”

Sen. Chris Coons of Delaware told Politico days before last month’s inauguration that Biden “knows that we are at the middle of an absolute turning point, a pivot point in American history. And he’s up for the challenge.”