WASHINGTON ― In the end, tribes got about $10 billion in the emergency $2 trillion stimulus bill that President Donald Trump signed into law last Friday.

The National Congress of American Indians, the largest organization representing the interests of tribal governments and communities, told Congress in mid-March that the nation’s 574 tribes would need at least $20 billion in direct federal relief to stem job losses and economic instability caused by the coronavirus pandemic. When the Senate and White House began talks on the stimulus, Democrats pushed for creating a $200 billion stabilization fund to provide direct aid to local and state governments. Of that $200 billion, $20 billion should go to tribal governments, they proposed.

The White House said no to both ― the fund itself, and tribes getting any direct relief.

When Democrats held their ground, the White House relented and agreed to create the stabilization fund, but only if it was capped at $150 billion and didn’t give money to tribes. Senate Republicans countered with capping the fund at $150 billion and giving tribes $2 billion, but only if that money came from a separate, supplemental appropriations bill being rolled into the stimulus. Democrats pushed back again, saying that tribes needed direct financial relief as well as increased annual appropriations to deal with the coronavirus. The direct relief would go toward things that needed immediate action, like tribal health care systems already struggling financially.

This standoff on tribal aid between the White House, Democrats and Republicans was one of the last sticking points in the entire $2 trillion bill, say these Democratic aides, who agreed to speak on background in order to speak freely.

In the final hours, the White House proposed $3 billion for tribes from the stabilization fund. Democrats said no and that tribes would need at least $10 billion. Republicans proposed $5 billion. Democrats said no. The White House and Republicans eventually caved as tribal advocacy groups became more vocal and key Democrats, including Minority Leader Chuck Schumer (D-N.Y.) and Tom Udall (D-N.M.), vice chairman of the Committee on Indian Affairs, made calls to Republicans urging their support.

The stimulus provides a total of $10 billion for tribal governments, of which $8 billion is from a newly created tribal government stabilization fund and about $2 billion is in supplemental appropriations. Here’s a breakdown of specific tribal resources, produced by the Senate Indian Affairs Committee.

Treasury Secretary Steven Mnuchin and White House legislative affairs director Eric Ueland led stimulus negotiations for the White House. Senate Majority Leader Mitch McConnell (R-Ky.) led the talks for Republicans. But it was Mark Meadows — who had been concurrently representing North Carolina’s 11th congressional district and serving as Trump’s acting chief-of-staff until this week, when he resigned from his House seat — who was in these meetings arguing that tribes shouldn’t get anything, according to these Democratic aides.

Requests for comment from the White House, the Treasury Department and Meadows’ senior advisor Ben Williamson were not returned. 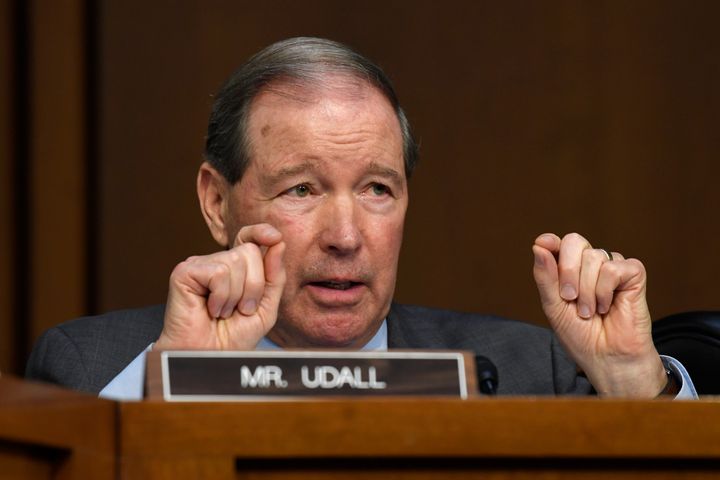 Were any Senate Republicans actively trying to secure direct relief for tribes? Sens. Martha McSally (R-Ariz.) and Steve Daines (R-Mont.) wrote a letter to McConnell on March 20, urging him to include money for tribes in the relief package. But beyond that, at least according to these three Democratic aides, the two senators didn’t take any action until Democrats pressed them to help in the final 24 hours.

“Tribes were an afterthought,” said one of the aides. “The White House and Republicans would have been satisfied with zero.”

Aides to McSally and Daines did not respond to requests for comment.

Ten billion dollars is not nearly the level of money tribes said they need to weather the coronavirus, but it is a historic level of funding. Udall praised the “compromise” bill Democrats were able to get. Of the $2 billion in supplemental appropriations funding for tribes, more than $1 billion is for the Indian Health Service, $453 million is for Bureau of Indian Affairs programs like public safety and purchasing protective equipment for emergency personnel, and $69 million is for the Bureau of Indian Education.

The Indian Health Service is charged with providing health services to federally recognized tribes. It is also notoriously underfunded, and Native populations are particularly vulnerable to COVID-19, the disease caused by the coronavirus, given their high rates of diabetes, heart disease and other underlying health conditions.

“Tribes are on the front lines of this public health crisis, and they have been very clear that they need health, economic, and community COVID-19 recovery resources,” Udall said in a statement. “Congress must do more to respond to the unique COVID-19 related public health and economic crises in Indian Country and to uphold our trust and treaty responsibilities to all American Indians and Alaska Natives.”