Left-wing activists following and filming Sen. Kyrsten Sinema, D-Ariz., in a bathroom attracted plenty of criticism this week, but one co-host of “The View” warned of possible bloodshed if such tactics continued.

During a discussion of Sinema and Sen. Joe Manchin, D-W. Va., who have held up a $3.5-trillion Biden administration spending package over price concerns, Sara Haines objected to public confrontation tactics to change their minds.

The antics came to a head Sunday when activists stalked Sinema into a bathroom at Arizona State University, where she teaches in addition to her Senate duties.

“I don’t think the way this was handled, following someone into a bathroom is [never] a good idea,” Haines said. “In this day and age where we live in a very big gun country … Over 300 million guns across this country. When you confront people, it may not end well. It’s not going to effectuate change most likely when you’re harassing people.”

Co-host Joy Behar cut in to boast of a time she confronted then-Speaker John Boehner, R-Ohio, at a restaurant over what she deemed his obstruction of President Barack Obama. 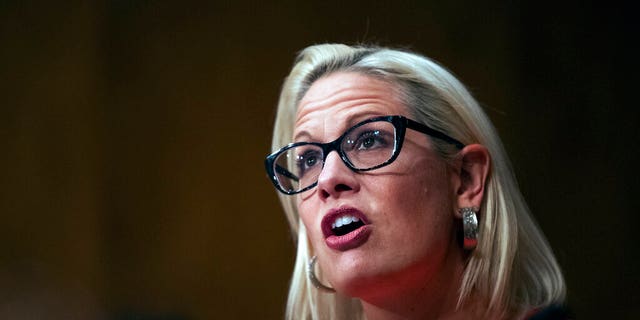 The show’s liberal hosts have repeatedly expressed frustration with Sinema and Manchin for not getting onboard with Biden, with Behar calling them “enemies” of democracy last week.

Co-host Sunny Hostin agreed that the bathroom incident was wrong but fumed at Sinema for not being more responsive.

CNN commentator Ana Navarro, who frequently appears on “The View” as a fill-in host, suggested on Twitter Monday that Sinema deserved to be followed into the bathroom for not engaging more with voters.