Journalists from The Age and The Sydney Morning Herald have been honoured at the 2022 Citi Journalism Awards for Excellence, which recognise outstanding business and finance reporting across Australia and New Zealand.

Economics correspondent Shane Wright won the overall prize, the Citi Journalism Award for Excellence, for his series on the Reserve Bank of Australia and monetary policy. Wright also won the economics category for the series. 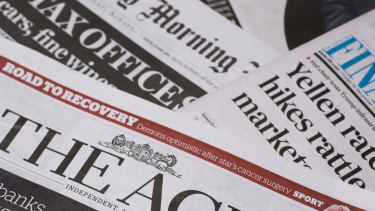 Copies of The Age and The Sydney Morning Herald newspapers.Credit:Dominic Lorrimer

Business reporter Charlotte Grieve won the Citi Young Business Journalist of the Year Award for her series about how the big four banks were fighting financial crime.

Investigative journalists Adele Ferguson and Kate McClymont and The Australian Financial Review’s Neil Chenoweth won the markets and investment category for their reporting on the Nuix software company.

Ferguson and Herald senior writer Deborah Snow and the ABC’s Chris Gillett won the broadcast media category for their investigation ‘An Indigenous community wants to know where their money has gone’ , which aired on 7:30.

The awards recognise the critical role media plays in the Australian and New Zealand business landscape, and encourage excellence in business and finance reporting in the two countries.

A panel of independent judges from the business and regulatory community determined the winners on criteria including originality in thinking and impact.