For nearly 50 years, Men's Wearhouse was synonymous with its tailored bargain suits and television commercials promising its customers: "You're going to like the way you look — I guarantee it."

However, with most of the country still homebound amid the coronavirus outbreak, suits and formalwear have gone by the wayside and left the fate of Men's Wearhouse in the balance. On Monday, Tailored Brands — the parent company of Men's Wearhouse, Jos. A. Bank, Moores, and K&G Fashion Superstore —filed for Chapter 11 bankruptcy protection with plans to immediately close 100 stores across the company.

In a note on its website, Tailored Brands attributed the decision to the pandemic, which in addition to temporarily shuttering stores has also shifted consumer demand toward athletic wear and loungewear.

"The coronavirus pandemic has altered the way we live and work. There are fewer in-person meetings, less going out, and postponed wedding celebrations, whereas our clothes are better suited to being out and about. That, in turn, means the need for fewer stores," the company said. "When the world is ready to dress up and go out again, we will be there to serve them."

Back when the world was dressing up and going out, Men's Wearhouse was there to help Americans suit up. Founded in 1973 by George Zimmer, the company grew to become one of the largest menswear chains in the country, even it hit a series of challenges in recent years, including the unceremonious ousting of Zimmer, the onset of the retail apocalypse, and the coronavirus.

We took a closer look at the rise and fall of Men's Wearhouse over the years.

Men's Wearhouse was founded in 1973 by George Zimmer in Houston, Texas. 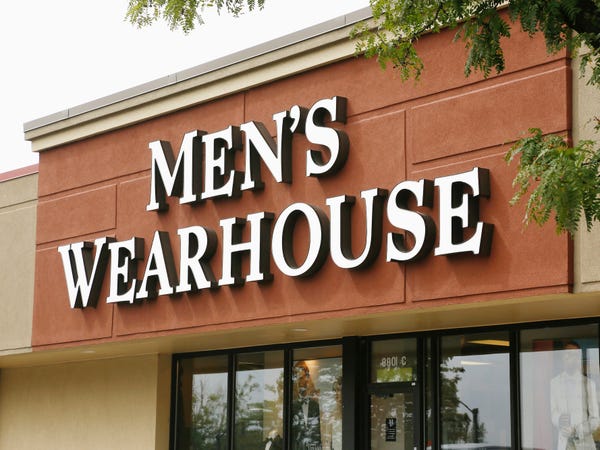 After graduating from college, Zimmer worked for his father's struggling raincoat business, ultimately taking the knowledge he gleaned as a manufacturing representative to create Men's Wearhouse.

Zimmer wanted to create a go-to destination for menswear featuring "a full selection of suits, sport coats, sportswear and accessories from top designers." He found quick success at selling them for bargain prices compared to department store competitors. 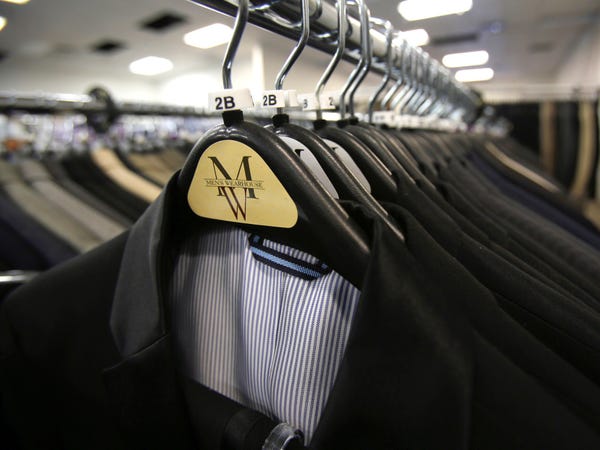 Today, Men's Wearhouse carries a wide array of brands ranging such as Calvin Klein and Tommy Hilfiger, as well as exclusive offerings from collections like Awearness by Kenneth Cole and Black by Vera Wang. 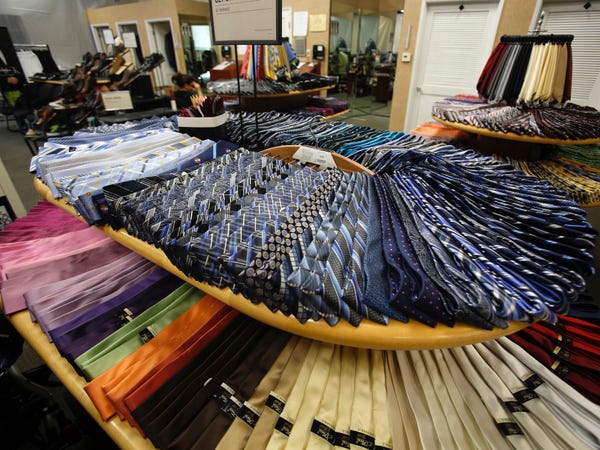 Over the next two decades, Men's Wearhouse rapidly expanded across the country, growing from 12 stores in 1981 to 25 in 1985 and then continuing to multiply. On the heels of its success, the company went public in 1992. 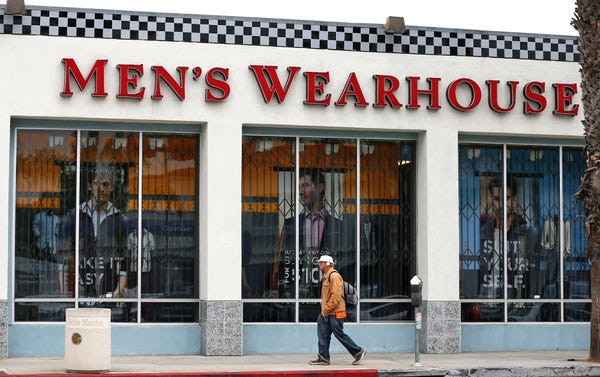 After moving the company from Texas to California in the mid-1980s, Zimmer opened asprawling corporate headquarters and training facility in 1995, developing a multi-day program for new employees called "Suits University." 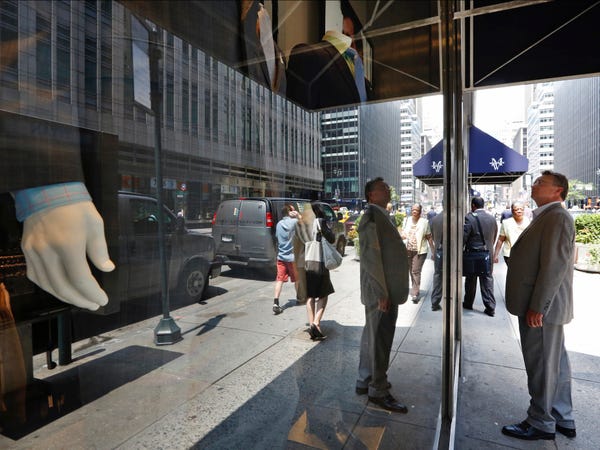 In turn, Men's Wearhouse became known not only for its low prices but its excellent customer service. 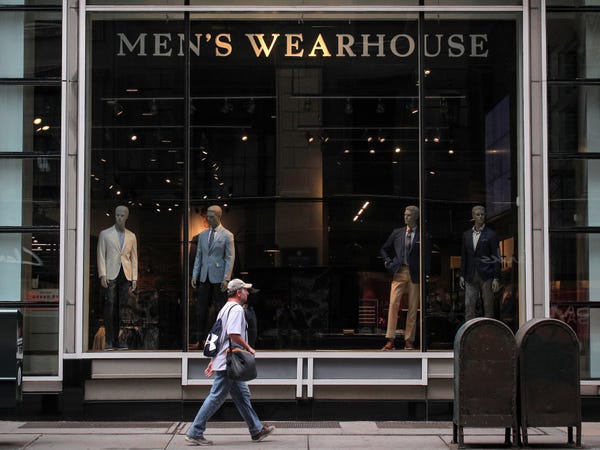 In the second half of the 1990s, Zimmer turned to acquisitions to build his customer base, starting with the brands Kuppenheimer and Joseph & Feiss in 1996. In 1997, he created the "Value Priced Clothing" division with two new lower-priced chains — C&R Clothiers and NAL. 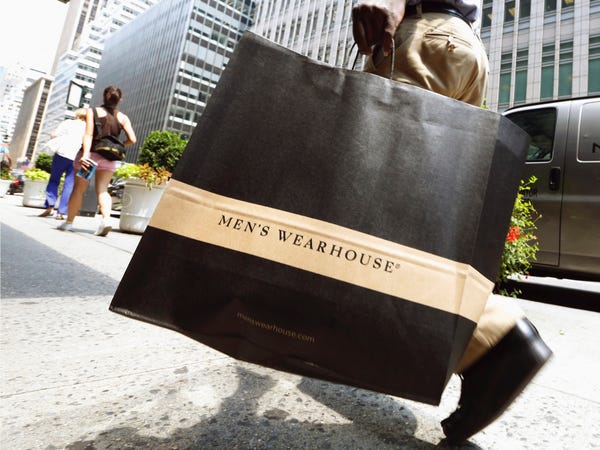 By 1998, the company opened its first store in New York City. The next year, Men's Wearhouse continued its acquisition spree by adding K&G Men's Center and the Canadian-based Moores Retail Group. 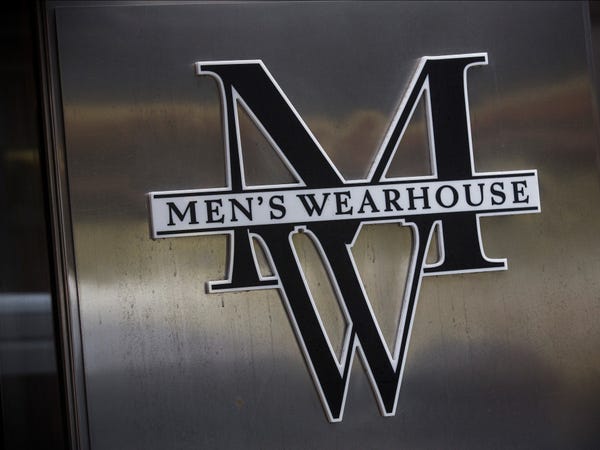 During this period, Zimmer started to make a name for himself for his appearances in Men's Wearhouse television advertisements using his trademark line: "You're going to like the way you look — I guarantee it." 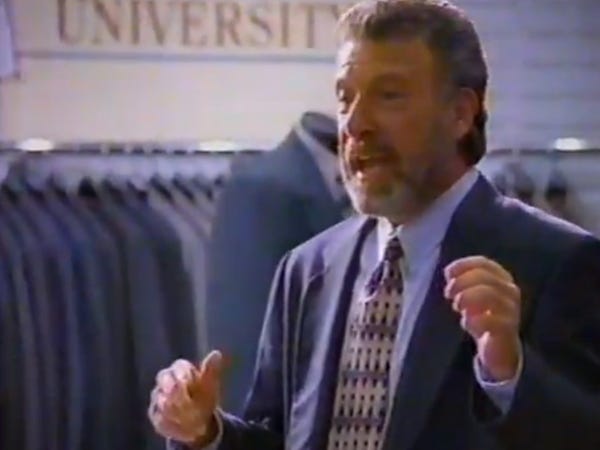 Zimmer became the face of the brand as a result, appearing in countless commercials over the years. 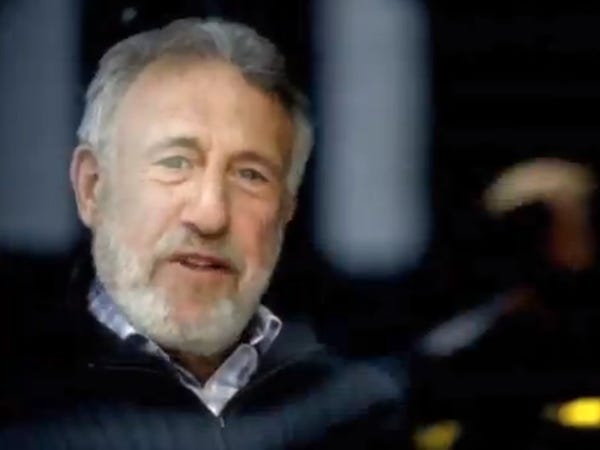 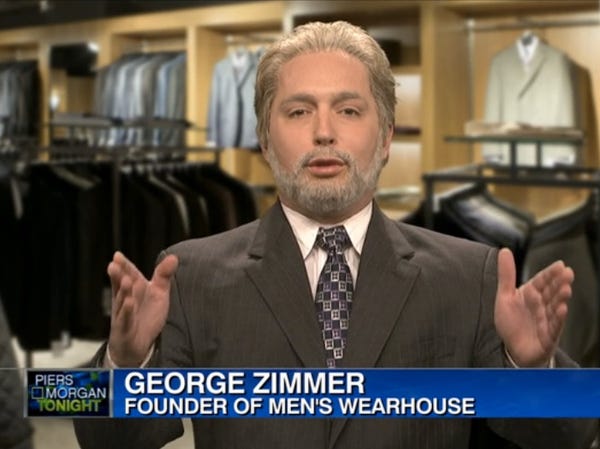 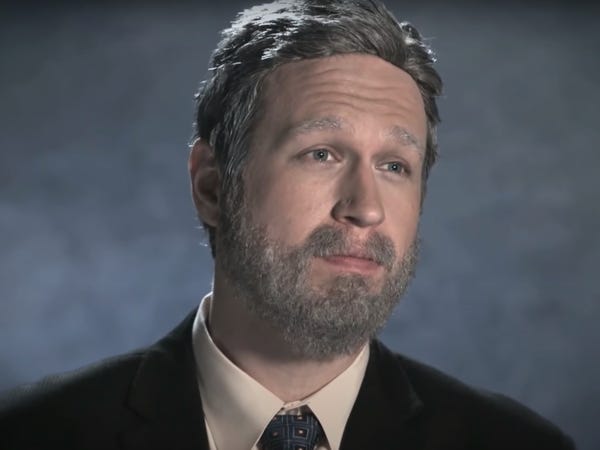 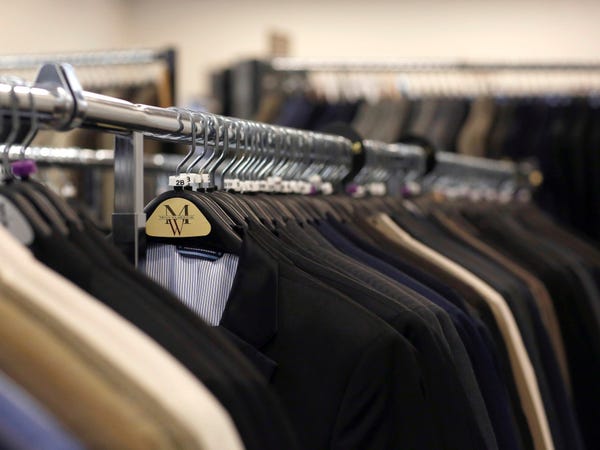 In the early 2000s, Men's Wearhouse forged a number of philanthropic partnerships, including sponsorships with the United Football League and pledging support at a variety of charitable sporting events. 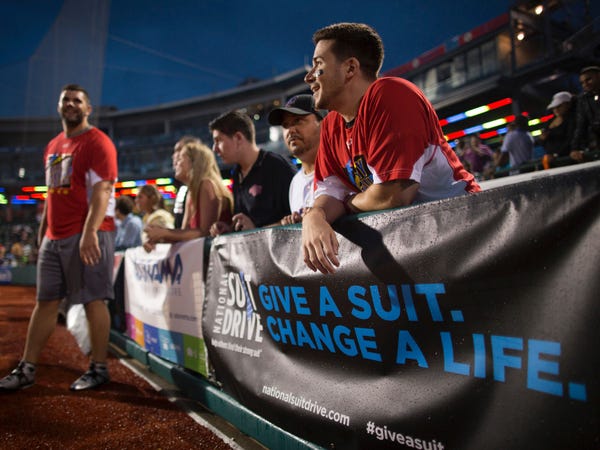 Such efforts also included the start of the multi-year "Give the Suit Off Your Back" campaign in 2007, which encouraged donations of gently used suits and professional clothes …. 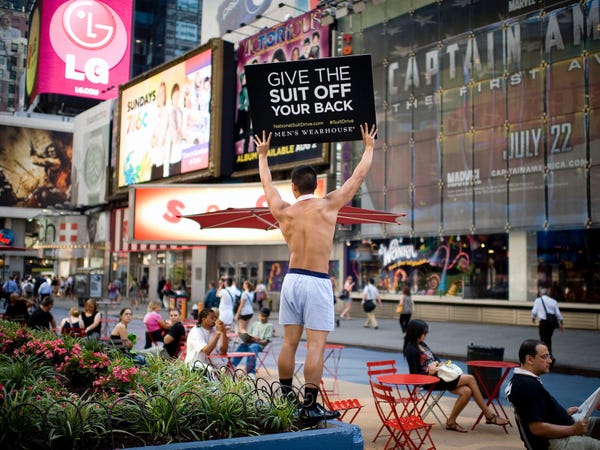 … using the help of a campaign of scantily clothed men. 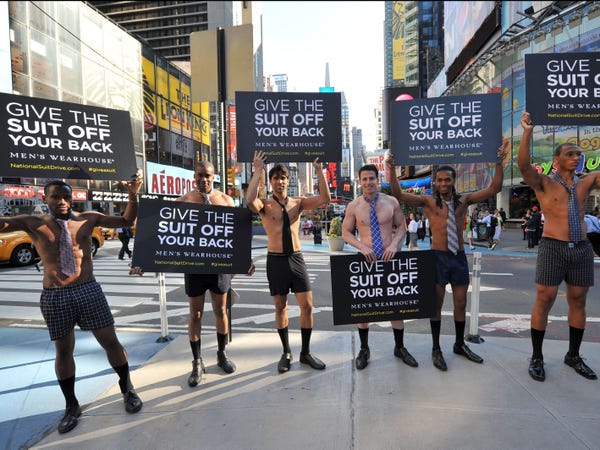 In 2013, Zimmer — then executive director of the company after passing the chief executive role to Doug Ewert — was unceremoniously ousted by the Men's Wearhouse board of directors after Zimmer "refused to support the team unless they acquiesced to his demands." 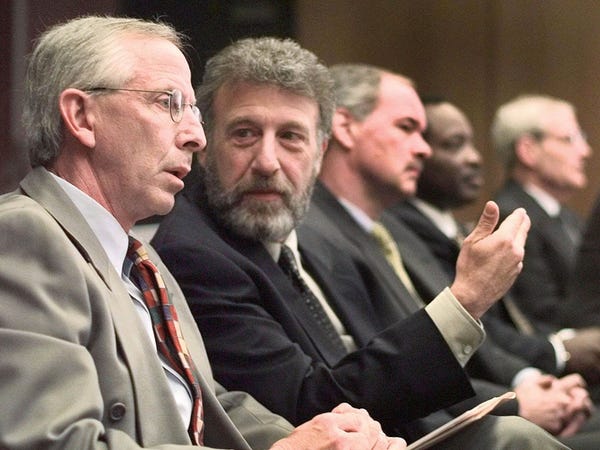 "Mr. Zimmer had difficulty accepting the fact that Men's Wearhouse is a public company with an independent board of directors and that he has not been the chief executive officer for two years," the board said in a state issued at the time and published by the Houston Chronicle. "He advocated for significant changes that would enable him to regain control."

Ultimately, Zimmer's tumultuous departure was only a harbinger of more turmoil to come: In October 2013, Men's Wearhouse received a bid to be acquired by Jos. A. Bank, prompting a several month takeover battle between the two companies. 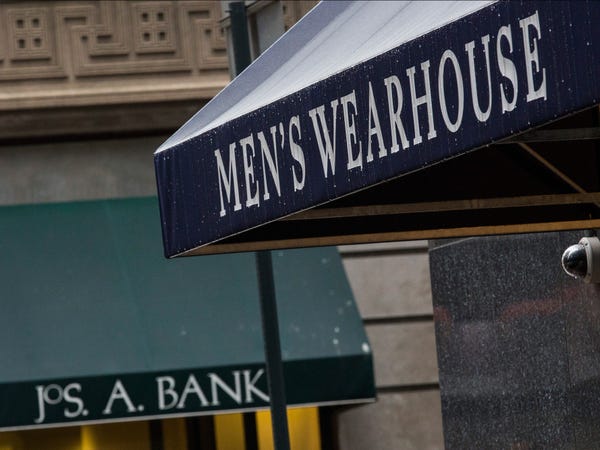 After months of strife, Men's Wearhouse eventually beat out Jos. A. Bank and acquired the brand for $1.8 billion in 2014. 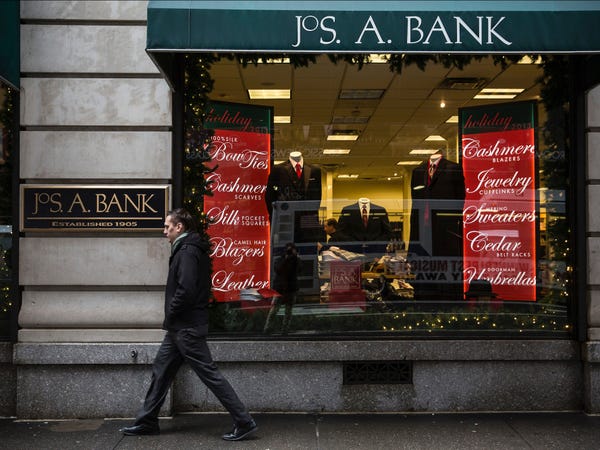 In 2016, the official parent company Tailored Brands was created, including its subsidiaries Jos. A. Bank, Men's Wearhouse, Moores, and K&G Superstore. 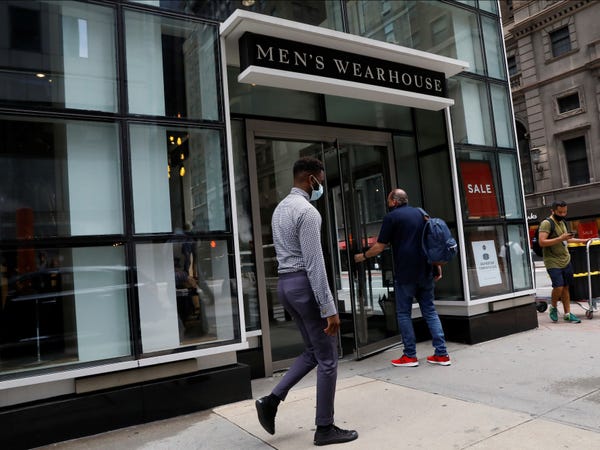 Even without Zimmer, Men's Wearhouse tried to maintain the legacy of his whimsical commercials, bringing on celebrity partners like Tan France of "Queer Eye" in 2018. 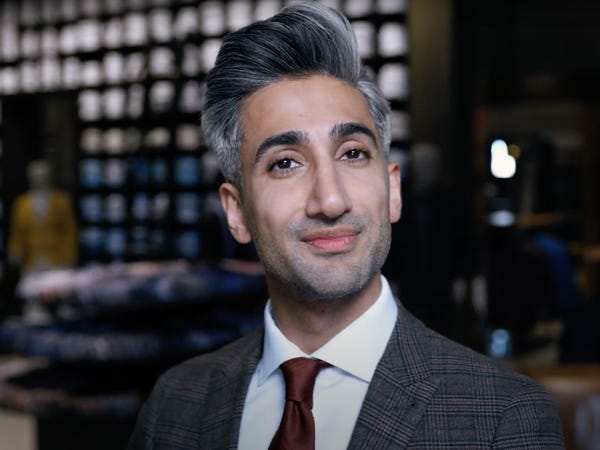 Still, Men's Wearhouse found itself struggling, like many of its peers, against the ongoing retail apocalypse and dealing with large overheard costs, low foot traffic, and declining sales. 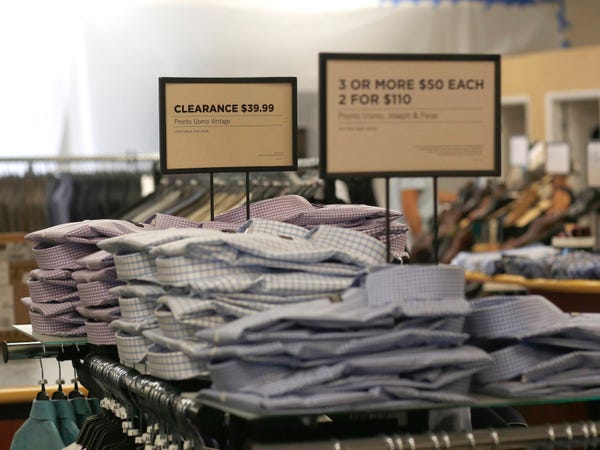 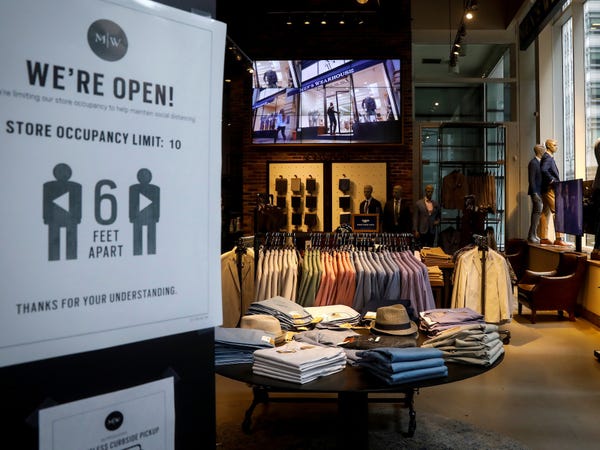 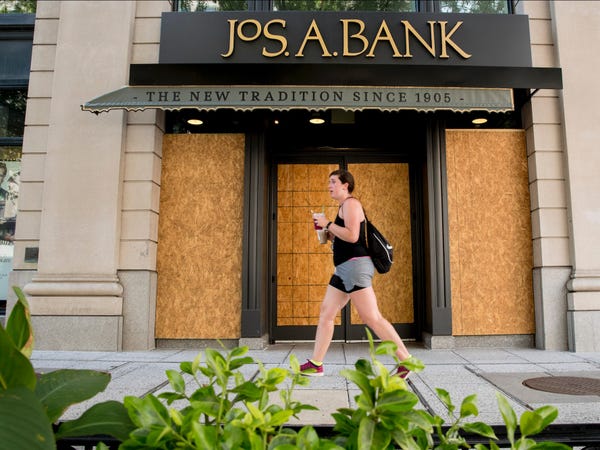 Do you have a personal experience with the coronavirus you’d like to share? Or a tip on how your town or community is handling the pandemic? Please email [email protected] and tell us your story.

Related News:
Business News:
Ford Asked To Recall 3 Mln Vehicles Over Takata Air Bags
The best Valentine's Day deals of 2021 you can shop now, including early discounts on flowers and candy
US jobs numbers drop dramatically as Covid cases soar across the country
Soon you can buy insurance at petrol pumps, gas agencies
Election Pressure in Israel Speeds the Vaccination Process
Recent Posts
This website uses cookies to improve your user experience and to provide you with advertisements that are relevant to your interests. By continuing to browse the site you are agreeing to our use of cookies.Ok