New York (CNN Business)A self-driving Toyota vehicle was barely moving, but it still managed to collide with a visually-impaired athlete at the Paralympic Games, raising potential concerns about the limitations of autonomous driving technology.

Toyota’s CEO on Friday apologized in a video posted to YouTube after one of the company’s self-driving vehicles hit the athlete while driving at 1 to 2 kilometers per hour around the Olympic Village in Tokyo.
“It shows that autonomous vehicles are not yet realistic for normal roads,” CEO Akio Toyoda said in Japanese in the video, according to Reuters.

The use of the vehicles at the Paralympics has been halted amid an investigation of the incident by the police and the company, Toyota confirmed to CNN Business.

Toyota (TM) has been providing a specially-designed version of its battery-powered, automated “e-Palette” vehicles to transport athletes and staff during the Tokyo Olympic and Paralympic Games, which began earlier this week. Toyota worked with Paralympic athletes to develop the vehicles, which include “handrails and seats that are easy to use regardless of height” and electric ramps for riders in wheelchairs, the company said in a press release about the cars.

It also said the automated vehicles were designed to move at low speeds to increase safety, but that didn’t help Japanese Paralympic judo athlete Arimitsu Kitazono. 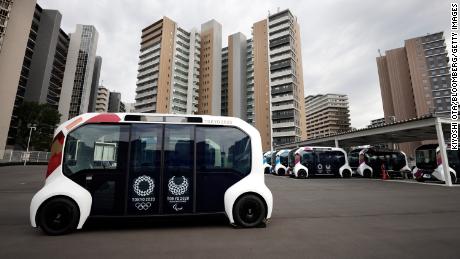 Kitazono was crossing a crosswalk in the athlete’s village when an e-Palette made a right turn and struck him at a very slow speed, according to a report from Japanese news organization Asahi Shimbun. At the time, the vehicle was under manual control of an operator, who told police they “were aware that a person was there but thought (the person) would (realize that a bus was coming) and stop crossing the (street),” the Asahi reported.
“A vehicle is stronger than a person, so I was obviously worried about how they were,” Toyoda said in the video, according to Reuters.

The athlete hurt his head and legs and was treated inside the athlete’s village. Nikkei Asia reported that Kitazono’s coach said he will miss the men’s judo match, which he was scheduled to compete in Saturday.
“We would like to express our sincerest apologies to the individual that was injured due to this unfortunate collision and we wish them a speedy recovery,” Toyota said in a statement. “We would also like to apologize for any inconvenience caused to those who use our mobility vehicles in the Athletes’ Village.”
Source: Read Full Article