Links to slavery from a couple of hundred years ago have been researched and apologised for. Carbon emissions have been offset. Work-life balance has been prioritised, racism awareness courses made mandatory, and every form of microaggression clamped down on. And, heck, let’s not get into the whole issue of what pronouns the board should use in its annual report.

Over the last decade, the Corporate Social Responsibility movement has exploded, increasing its power and influence, and jumping on every fashionable bandwagon it can. 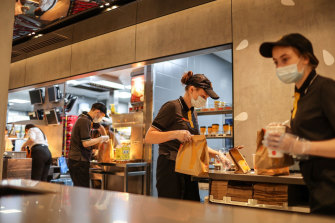 The more than 800 McDonald’s outlets in Russia continue to operate.Credit:Bloomberg

But hold on. Right now it is facing a real test. After all, if firing thermobaric bombs at civilians isn’t a contravention of your CSR code, and if shelling nuclear power plants doesn’t contravene your environmental and governance standards, it is hard to know what does.

True, many companies have stepped up to the challenge magnificently, closing units in Russia no matter what the cost to their shareholders.

And yet many others are still operating in the country, and we are not yet seeing the kind of social media support that we saw for movements such as Black Lives Matter.

In reality, if corporate social responsibility wants to be taken seriously then this is the moment to prove that it actually really means something of substance – and if companies can’t see that then it is just meaningless twaddle.

Over the last decade, the bulk of company annual reports have been turned into essays in woke politics. Businesses have lent over backwards to make sure they are sensitive to gender issues. They have done everything possible to make themselves carbon neutral.

When the Black Lives Matter movement arose a couple of years ago corporate social media feeds were adorned with its logo, despite links to dubious Marxist politics, while lots of companies boycotted advertising with mildly right-of-centre TV channels such as GB News. Hounded by ESG (environmental, social and governance) investors, companies have steadily turned themselves into engines of social activism.

We can debate whether that was right or wrong.

Many of us were starting to find the liberal piousness of certain corporations mildly irritating. Often we’d be quite happy for them to simply sell us a new car, or a soft drink, or some washing powder, preferably of decent quality at a fair price, without feeling the need to right all the wrongs in the world at the same time.

Even so, one point is clearly indisputable.

If a company does have any form of social responsibility then surely it needs to stop doing any kind of business with Vladimir Putin’s barbaric regime. In fairness, most companies have already stepped up to the plate, and have done so at record speed.

The list of businesses ending all involvement with the country is growing with each hour that passes.

Over the last few days Boeing, Apple, Amazon, Microsoft, BP, Sony and Land Rover have all joined the ranks of businesses that have pulled their products from the Russian market. In many cases, that is going to hurt financially.

After all, Russia is a significant market, especially for luxury goods and upmarket brands, and those sales are not going to be replaced any time soon. The bottom line will take a hit. 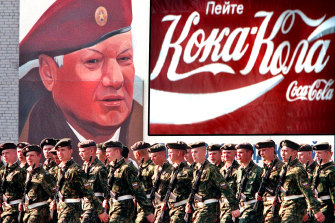 Coca-Cola is still operating in Russia despite a social media campaign drawing attention to its decision.Credit:AP

And yet, there are some glaring exceptions to that. Coca-Cola is still operating in Russia despite a social media campaign drawing attention to its decision. So are Pepsi and McDonald’s. The cosmetics brand Estée Lauder is still there despite a public letter from one major shareholder urging the company to get out of Russia.

Unilever is strangely quiet on the issue, with only a routine condemnation of the invasion by its chief executive Alan Jope, even though its Ben & Jerry’s ice cream brand disgraced itself only a month ago with a shameful attempt to blame the United States for the crisis.

Nestlé doesn’t seem to have any views on the invasion right now even though it has factories in Russia.

Neither does Mondelez, the owner of brands such as Pizza Hut, Burger King and Cadbury (and the Quaker founders of the chocolate manufacturer must be spinning in their graves over that). What can all those companies possibly be thinking? That the whole crisis will quickly blow over? That people will soon forget about it? Or that they can get away with the lame excuse that they are just selling ice cream, soap and software and it isn’t really anything to do with them at all?

This is the ultimate test of whether corporate social responsibility actually means anything.

Companies can’t sit on the fence on this issue any more.

The most terrifying land war in Europe since the Second World War demands a clear and unequivocal response. Almost two weeks after Russian soldiers started moving across the border, by this stage surely no international company should any longer be selling anything in Russia.

Nor should they be buying any Russian raw materials, even if it means that supply chains will be chaotic for a few months, and some deliveries will be delayed.

Social media feeds should be showing support for the Ukrainian people, just as they did for Black Lives Matter, and campaigns to help the victims of Russian aggression should receive the maximum support.

Nothing short of that is acceptable. Nor will trading in Russia likely be tolerated by consumers, or indeed by staff, suppliers or shareholders in the rest of the world, for very long.

This is the ultimate test of whether corporate social responsibility actually means anything.

If companies don’t cut ties with the country they can’t claim to have any form of conscience, or, come to think of, any claim to normal standards of decency – and blathering on about microaggressions or gender inclusiveness won’t cover that up.