From the meme stock rally to the “metaverse,” the CEOs who mattered in 2021 included Robinhood’s Vlad Tenev and Facebook’s Mark Zuckerberg.

Tenev navigated criticism of his company’s commission-free trading app to pull off an initial public offering that valued the brokerage startup at more than $US30 billion ($41 billion).

Zuckerberg changed Facebook’s company name and direction. He also pushed the now-called Meta to be more aggressive in responding to controversies, including a trove of leaked internal documents that outlined how much the company knew about harmful effects of its products. 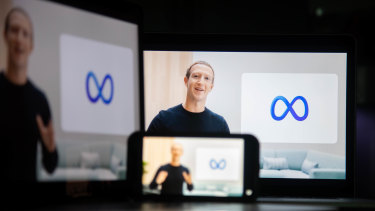 Mark Zuckerberg at the launch of Meta in 2021. The metaverse – widely misunderstood, largely unknown – is set to be one of 2022’s most prominent themes. Credit:Bloomberg

Another notable CEO, Citigroup’s Jane Fraser, the first woman to lead one of the nation’s largest financial firms, shook up the bank’s culture and took a different approach with its return-to-office plan than rivals, promising “Zoom-free Fridays” and permanent hybrid work schedules for all who want one.

What top executives will be the newsmakers of 2022? Here are some predictions for the CEOs to watch in the new year.

If 2022 turns out to be a return to normal, the CEOs of the companies that saw the biggest boost from the pandemic might be the ones trying to figure out how to stay afloat.

Shares of fitness bike maker Peloton have fallen 61 per cent over the past three months, while those in vaccine maker Moderna and videoconferencing app Zoom have sunk about 30 per cent.

Some executives took on prominent new CEO positions this year that are worth watching.

After nearly 10 years in stealth mode and holding one of the biggest IPOs of this year, Rivian is under pressure to deliver on its promise of doing for electric trucks what Tesla did for electric cars.

Despite having sold just 386 vehicles as of last week, Rivian now has a market cap bigger than that of Ford (an investor) and on a par with that of General Motors.

Rivian CEO RJ Scaringe has big expansion plans for next year, including breaking ground on a $US5 billion factory in Georgia while expanding the company’s plant in Illinois and producing 100,000 delivery vehicles for Amazon, another investor.

Mary Barra of General Motors expects a big payoff from the investments that the carmaker has made in electric vehicles.

In October, she said the company aimed to roughly double its annual revenue by 2030, to about $US280 billion, growth driven mostly by new electric trucks and cars but also by new revenue streams from software and services. In 2022, investors will undoubtedly keep an eye on the company’s progress on those ambitious goals.