These days, it seems more appealing than ever to relocate to a secluded Caribbean island. What could be better than a lazily swinging hammock, turquoise water gently lapping a sugary beach, and that omnipresent rum beverage?

While the actual relocating part of this fantasy may not be possible right now, the rum part certainly is.

"Most people think that rum isn't very dynamic or sophisticated. You mix it with Coke, or your general soft drink of choice, and move on your way," said Stephen Bennett, who is an accomplished rum reviewer, rum competition judge, and cofounder of Uncommon Caribbean. "The truth is that rum encompasses as much complexity and as many — or more — different styles as any spirit."

Rum is having a moment right now, he added. There's too much variety, which also creates confusion over quality and what qualifies as a rum, or a rhum (but more on that later).

Rum is a spirit produced from sugarcane, simply put. Once the cane is cut, the distiller then can take two different paths.

The first is to rum, which is produced by fermenting and distilling molasses, a byproduct of sugar production. The aging process is similar to any refined spirit, like whiskey and tequila. This is how the majority of the world's rum is produced. Rum takes its colors and flavoring from the aging process. White rum, for example, is briefly aged in stainless steel barrels, while dark rum is aged in barrels for a longer period of time. Rum often has delicate flavor notes as well, like spice, tropical fruit, vanilla, and caramel.

The second option is "rhum," or rhum agricole. Rhum takes the molasses out of the production process and begins fermentation and distillation directly with the raw sugarcane juice.

With August 16 being National Rum Day, there's no better time to find a rum (or rhum) that strikes your fancy. You may not be on that Caribbean beach just yet, but you can surely pretend, especially with the right rum. In fact, Uncommon Caribbean is hosting a "Summer of Rhum," taking grounded travelers on virtual rum tastings around the Caribbean.

Not sure where to begin? Here's what our experts suggest. 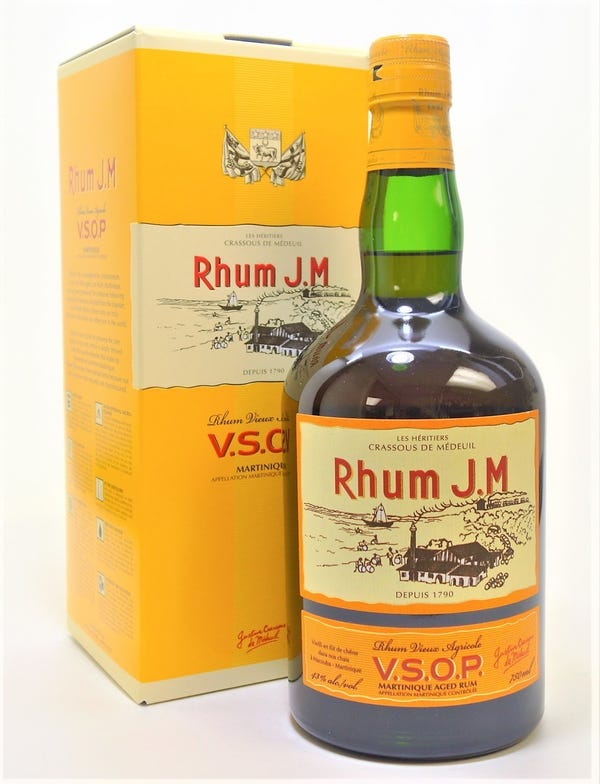 When it comes to rhum, Bennett finds himself reaching for those from Martinique, specifically Rhum JM VSOP. This rhum is aged three years in bourbon barrels and finished with an extra year in new American oak barrels. What you'll taste here are notes of nougat, cinnamon, and clove, as well as spiced butter and a bit of toffee.

"Northern Martinique is very mountainous, home to the Mount Pelée volcano, dense rainforests, and rich volcanic soil. Rhums from the northern region, like Rhum JM, espouse this richness in every sip," Bennett said. They're a bit sweeter and more robust than rums in the drier southern half of the island, he added. 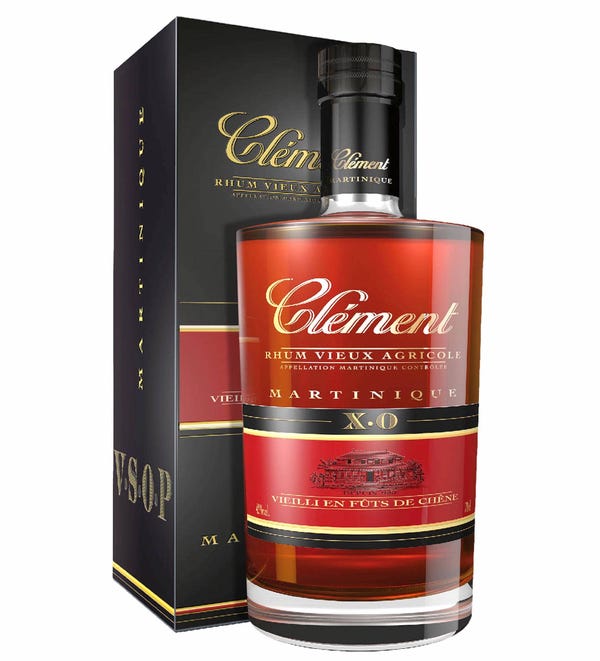 Moving toward the south of Martinique, the rhums are more grassy in flavor. Bennett recommended Rhum Clement XO from Martinique's drier southern shores. Rhum Clement has a variety of other labels, but its XO is one of its superior aged rhums.

This six-year-old rhum agricole is aged in a combination of both new and recharred oak barrels, and is recognized for its smoky aroma. As for flavors, it's delicate and flavorful with notes of honeysuckle, orange blossom, and fresh cinnamon. 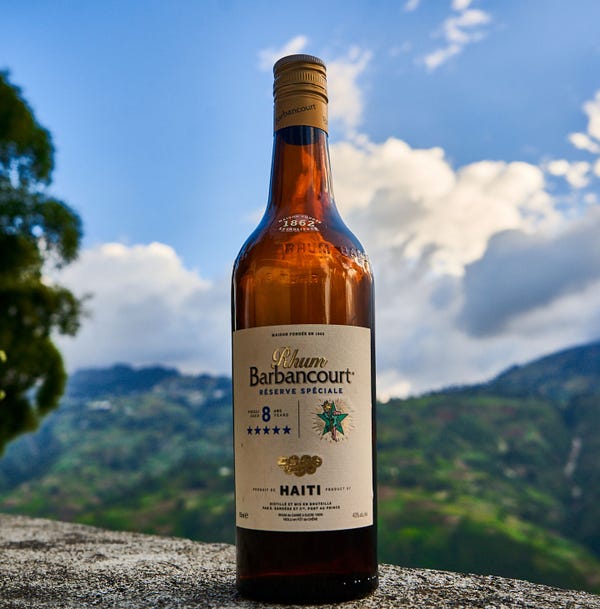 But Martinique isn't the only French Caribbean island churning out the quality rhum. Haiti has Rhum Barbancourt 8, which is another high-quality option. Rhum Barbancourt is one of Haiti's oldest rhum houses, dating back to 1862. It produces a variety of rhums, from its white rhum to its 15-year rhum. For Bennet, Rhum Barbancourt 8 (aged eight years) is the one to beat for its vanilla and pepper flavors up front, with a toasted and citrus finish.

"I like to understand and replicate how rums and rhums are most commonly enjoyed in the destinations that they're made," Bennett said. "When I visited Haiti, for instance, I discovered that Rhum Barbancourt 8 is universally enjoyed with a load of ice and a squeeze of lime. I had never tried it that way before. Now, loads of ice and a lime are a must every time." 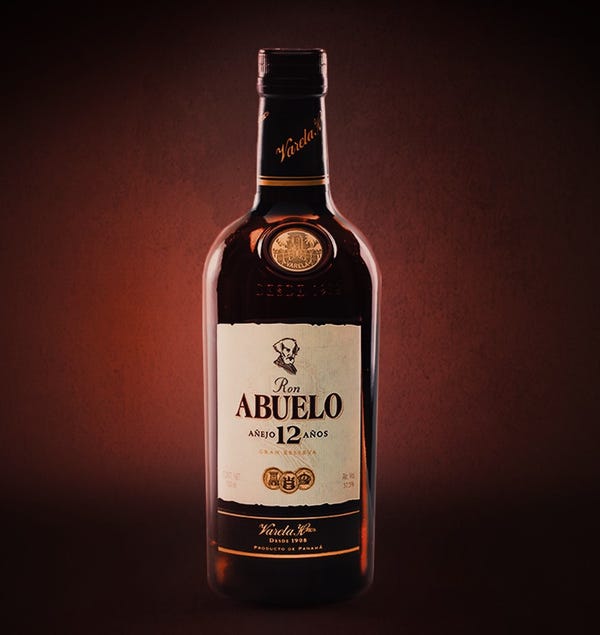 Ron Abuelo is one of the signature rums of Panama, made from 100% Panamanian Estate-grown virgin sugar cane honey, using the same methods of distilling for the past three generations. Its most mature product is the Ron Abuelo Anejo aged 12 years, known for its complex, vanilla notes and dark amber coloring. It also has hints of sweet caramel and dry fruit.

Without a doubt this rum is best enjoyed sipped neat or on the rocks — not even the bartenders will serve this to you in a mixed drink, according to Jerry O'Connell, owner of the famous Soggy Dollar Bar in Jost Van Dyke, British Virgin Islands (the bar credited with having invented the iconic Caribbean rum drink, The Painkiller).

"This is Panama's signature high-end rum," he said. "I was at a hotel bar and looked up at the shelf and saw this rum. I ordered it in a rum and coke and the bartender wouldn't serve it to me that way. He said he'd give it to me in a glass, but it was against his religion to mix it." 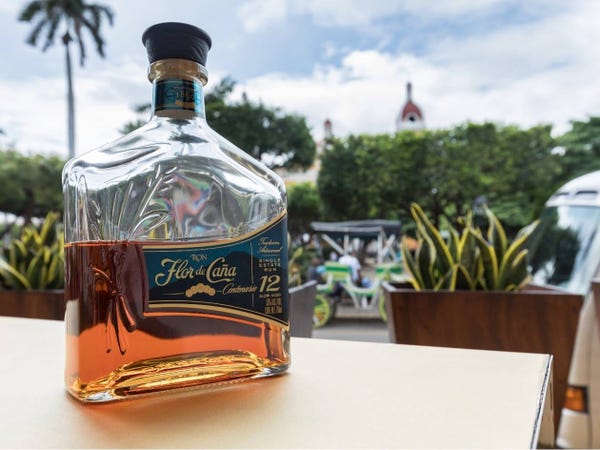 Sustainably produced in Nicaragua, Flor de Caña is one of the world's premiere rums; it won the 2019 Best Rum Distillery title, one of the highest distinctions granted by the International Rum Conference. It's Fair Trade, produced from a fifth-generation, single-family estate, aged naturally without sugar, and distilled with 100% renewable energy.

"This rum is produced in a distillery that is hundreds of years old and is a family-owned operation, founded in 1890. It's aged, smooth, and really helps you appreciate the dark rums and how good the caramel flavors are," O'Connell said. 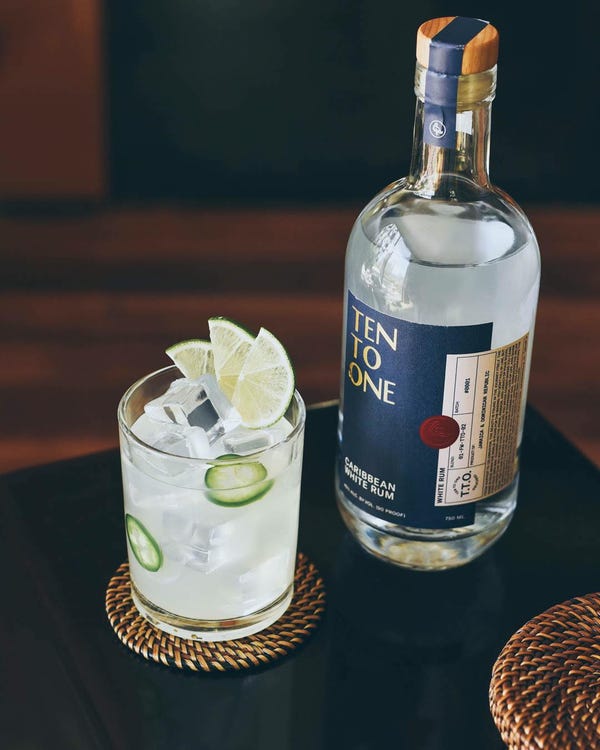 When it comes to recommendations, some experts tend to swing more toward the dark rums. But New York Liquor Lab mixologist Anthony Baker said he often reaches for light rum, as it can be just as intricate as the darks.

Ten To One Light Rum is unique because it takes rums from Jamaica and the Dominican Republic and blends them together. A large portion of it is pot-distilled, which allows the rum to retain much of the oils and esters that contribute to its richness.

"This is my all-time favorite light rum," Baker said. "It's very rich and full-bodied with a great mouth feel."

Baker added that the best way to use Ten To One Light Rum is to make a spirit-forward cocktail, like a daiquiri. It's 90-proof and it's incredibly smooth, so proceed with caution. 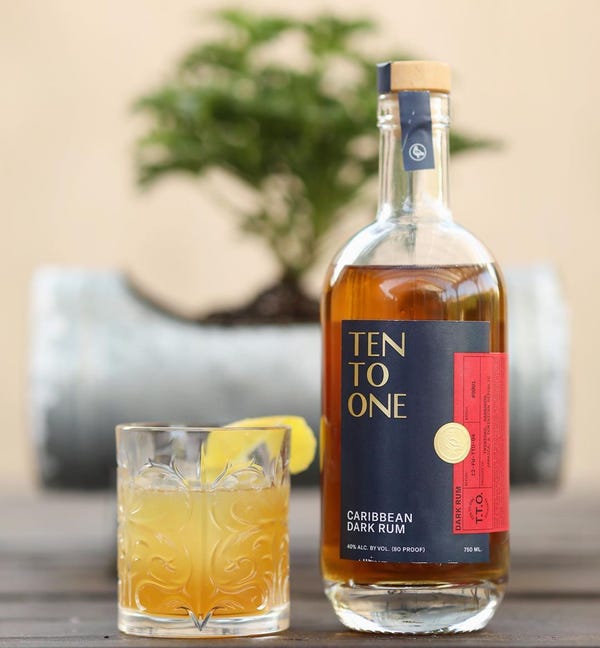 Then, of course, Ten To One has a dark rum, which also happens to be a favorite of Baker's. It's not as rich as the light rum, he said, which is surprising, but it does have more complexity in its flavor.

"This complexity is from the aging, as 80% of the blend is rum that has been aged for at least eight years," he said. "Unlike its lighter counterpart, TTO Dark Rum is a blend of rums from four regions instead of two — Trinidad and Tobago, Jamaica, Dominican Republic, and Barbados."

He recommended sipping it with a big rock of ice, or using it in a rum-based, Caribbean-style Old Fashioned. 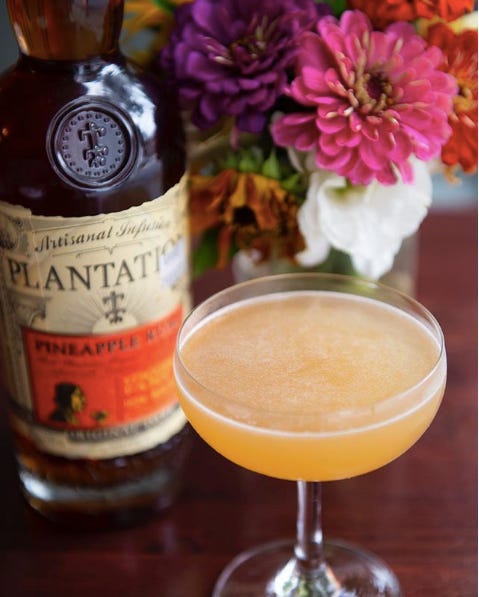 When you hear about Pineapple Rum, chances are you're thinking of the coconut stuff — the kind that leads straight to hangover. But before you do a double take, note that Plantation Rum's Pineapple Rum is, in fact, rum.

Baker said that a typical coconut rum is in fact "a 'rum-based liqueur' that has a low ABV and high sugar content. This Pineapple Rum, on the other hand, has a high ABV and a low sugar content; and the sugar is only added to give the rum caramel color."

Because the Pineapple Rum is so rich and flavorful, Baker recommended sipping it on the rocks or "keeping it in the freezer and pulling it out for a few sips on the hot summer days." 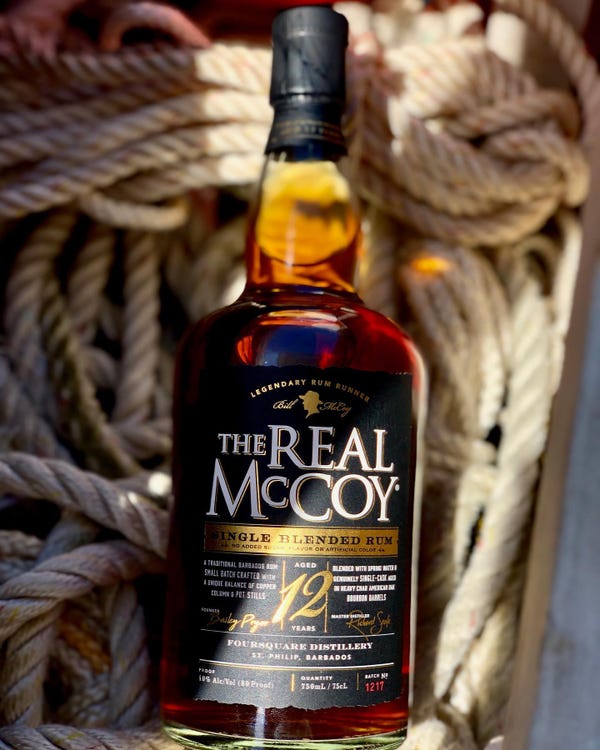 This rum out of Barbados was named for a rum runner of the Prohibition era, Bill McCoy. Today, the award-winning rum has a few different styles, aged three, five, and 12 years. The Real McCoy is a small batch and crafted from fourth-generation master distillers.

"The 12-year-old is aged in bourbon barrels and is one of my favorites," said Kenneth McCoy (no relation), chief creative officer of The Rum House, a rum bar in New York City with more than 100 different rums on the menu. "I like [The Real McCoy] because of their transparency and how they talk about making rum. All of their rums are made without added sugars or coloring. They're making some outstanding rums."

McCoy added, "I like to taste it neat first, have some thoughts, and add a little ice to see what happens." 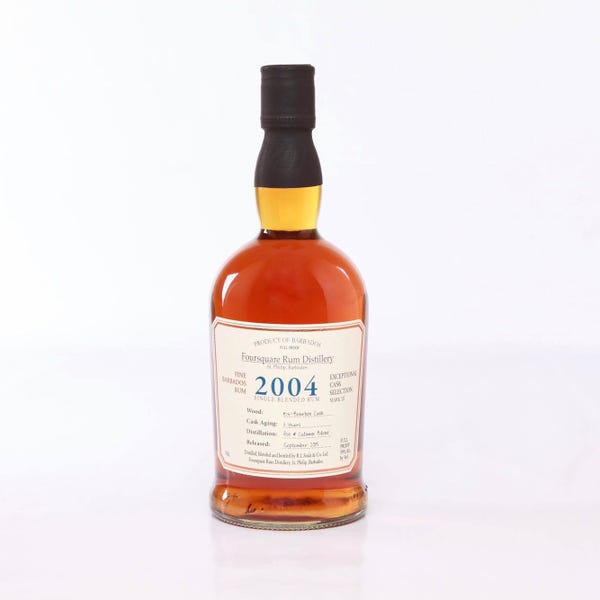 Also hailing from Barbados, Foursquare Rum Distillery is located on a sugar plantation from the 18th century. Distilling is led by Richard Seal, a fourth-generation master distiller.

For McCoy, Foursquare is a sipping rum. He recommended it neat or on the rocks always.

"If you want to put them in something, go ahead," he added. "But I also recommend you taste them neat or with a few ice cubes. The expressions are just so interesting, as are the nuances that come out of them."