Tesla has agreed to modify software in its cars to prevent drivers and passengers from playing video games on the dashboard screens while the vehicles are in motion, a federal safety regulator said on Thursday.

The agreement came a day after the National Highway Traffic Safety Administration opened a formal investigation of the game feature, which is known as Passenger Play. The investigation was announced after The New York Times reported this month on the potential safety risks the games posed. 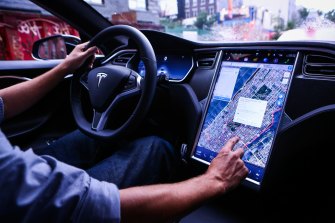 Before the software change, Tesla’s screens could be used for video games whilst driving.Credit:Christopher Goodney

“Following the opening of a preliminary evaluation of Tesla’s ‘Passenger Play,’ Tesla informed the agency that it is changing the functionality of this feature,” the safety agency said in a statement. “In a new software update, ‘Passenger Play’ will now be locked and unusable when the vehicle is in motion.”

Safety experts had criticised Tesla for allowing the games to be accessible while cars were in motion. “There is no argument that can be made that this isn’t dangerous,” said Jason Levine, executive director of the Center for Auto Safety, a consumer group.

Tesla did not respond to a request for comment.

The federal safety agency is examining other potential safety issues with Teslas. In August, it opened a formal investigation into Tesla’s Autopilot system, which can accelerate and brake a car on its own, after cars using the feature crashed into parked fire trucks, police cars and other emergency vehicles at least 11 times. Those accidents resulted in one death and several serious injuries.

In addition, the safety agency is reviewing more than two dozen other accidents involving Teslas operating on Autopilot. The agency has said eight of those crashes resulted in a total of 10 deaths since the first occurred in 2016.

While the video game feature is not directly linked to the Autopilot issues, the safety agency on Wednesday suggested it was worried that Tesla drivers could play games while using Autopilot in the mistaken belief that the car was driving itself and that they need not pay attention to the road.

The company instructs drivers to keep their hands on the wheel and pay attention to the road while using Autopilot. But it does little to monitor drivers, and there is mounting evidence that some drivers routinely ignore its advice and warnings.

Tesla has been adding video games to its cars for several years. Most can only be played when the car is in park. But this summer it remotely updated the software of its cars to make available three games that could be played on the large touch screens mounted in the centre of Teslas. The games were Solitaire; a jet fighter game, Sky Force Reloaded; and a conquest strategy game, the Battle of Polytopia: Moonrise.

A warning that appeared before the Solitaire game started indicated Tesla expected it to be played while the car is moving: “Solitaire is a game for everyone, but playing while the car is in motion is only for passengers.” Players were asked to confirm that they were not driving the car, but nothing prevented drivers from clicking through that screen and playing the games.

The investigation opened by the safety agency on Wednesday covers about 580,000 cars and SUVs from model years 2017 through 2022.