Another year, another proposal to restructure wagering and lotteries business Tabcorp – the company that could be best described as a corporate shape-shifter.

Confirmation that a number of proposals have been lobbed before the Tabcorp board to sell its wagering and media business shouldn’t really surprise anyone that follows the company.

But it is increasingly clear that the status quo is not an option. If the wagering assets are not sold, shareholders will renew a push for a demerger. 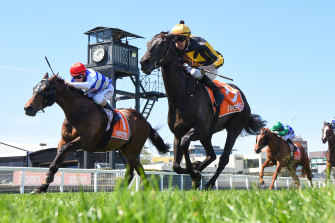 Tabcorp under pressure to restructure Credit:Getty

Tabcorp merged with the successful Queensland based Tatts Group in 2017 having demerged its casino operation six years earlier.

It looks like the conditions are ripe for another change in shape.

There is perennial chatter around the market that interested parties have run the numbers on splitting the wagering/media assets from the more successful lotteries business.

And even in periods when the chatter dies down the big shareholders are in the board’s ear pushing for ways to enhance the value of its shares.

Most recently activist shareholder Sandon Capital reportedly approached the company urging it to undertake a split. On Tuesday it repeated its call for a business separation as did another large shareholder Tanarra, which told this masthead now was the time to push for a divorce between Tabcorp’s media/gaming assets and its lotteries business.

Both these large shareholders take the view that Tabcorp’s share price doesn’t reflect the true value of the lotteries business.

Last year shareholders pushed for fresh blood at the helm – resulting in the departure of the chairman Paula Dwyer and plans for the chief executive David Attenborough to leave when a replacement is found.

Perpetual, Investors Mutual and Tanarra Capital were a major part of that push.

A perfect time for would-be asset hunters to swoop.

Newly installed chairman Steven Gregg has barely had time to put his feet under the desk and his attention has been diverted looking for Attenborough’s replacement. As new chair he also can take a fresh look at Tabcorp’s structure.

Tabcorp’s confirmation of media speculation about the approach from an undisclosed suitor set a fire under the company’s share price – which shot up 8.8 per cent.

Gregg could do a lot worse than entertain any decent offers for Tabcorp that crossed his desk. He must weigh this opportunity up against finding an executive capable of executing a corporate renovation or acquiescing to shareholder pressure for a demerger.

It is now more than four years since Tabcorp’s $11 billion merger with Tatts and the promises made back then for a revival of the wagering business.

The spin at the time was that combining Tatts’ successful wagering business together with Tabcorp’s gaming operations would somehow lift both. This theory was either flawed or the integration was just poorly executed (and took too long) – probably both.

Given the uplift in performance has been elusive it comes as no surprise that several different parties from private equity consortiums to offshore corporate bookmakers such as Ladbrokes have been rumoured to have run the numbers.

The wagering business has become the challenged segment thanks to online competition and has left the lotteries business doing the heavy lifting on earnings.

These proposals may be no different from the others that are said to have been around for a couple of years. Tabcorp described them as unsolicited, indicative, non-binding and subject to numerous conditions. But the board says they are being assessed. And given the pressure from shareholders the board has little choice.

The share price rally on the back of Tuesday’s announcement suggests punters believe that Tabcorp’s wagering and media businesses are in play.

And the fact that the company’s announcement mentioned “a number” of proposals may mean there will be an auction.

On top of the longer-term challenges faced by Tabcorp’s wagering business it has also needed to deal with the effects of COVID in 2020.

Tabcorp was forced to raise $600 million last August to bolster its balance sheet. It slashed the value of its wagering business by $1 billion in its full-year accounts in response to challenging conditions including the forced closure of pubs, clubs and TAB outlets, and the suspension of sporting leagues.

Even before impairments, the profit for the year fell more than 31 per cent. The write-downs pushed the company to a bottom line loss of $870 million.