Plans were lodged by the joint developers Dexus and Frasers Property Australia for the Central Place Sydney project in late March and were approved by the City of Sydney council on Thursday night.

Central Place Sydney sits on the western edge of Central Station and is adjacent to the planned 40-storey Atlassian timber building also being developed and funded by Dexus. 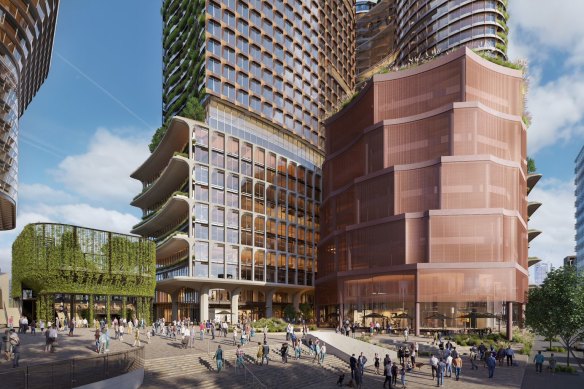 The final two elements of the $3 billion Central Place Sydney project are the Connector building and the Pavilion.Credit:Stocksy

It will comprise more than 130,000 square metres of commercial floor space over two office towers, a smaller 10-storey block called the Connector and public space known as the Pavilion.

The project director for Central Place Sydney, Kimberley Jackson, said the development has been designed to create a place “where work and lifestyle can blend seamlessly” to create, a thriving tech and innovation neighbourhood.

“Central Place Sydney will set the benchmark in sustainability for commercial developments of this scale in Australia,” Jackson said. It was designed by architects Fender Katsalidis and SOM.

The state government gave the green light to the plans in August last year as a key strategy to revitalise the unloved railway precinct and activate a 24-hour economy with tech giant Atlassian as the anchor.

Under the plan, the NSW government’s Tech Central will eventually cover six neighbourhoods including Haymarket, Surry Hills, Ultimo, Redfern, Chippendale and Eveleigh, and will cater for students at the nearby universities.

Jackson added that Central Place Sydney will create improved outdoor landscaped spaces for workers and visitors as well as an expanded retail offering and pedestrian access within the sub-precinct. Developer Toga is also involved with plans for a possible hotel.

Dexus and Frasers Property Australia are in talks with potential tenants for the new office towers.

Jackson said the name Central Place Sydney pays “homage to its centrality” within Tech Central, as well as its continued role as a place where “people and ideas come together”.

Against the backdrop of the development are landlords are working hard to get staff back to the office, although the co-founder of Atlassian Scott Farquhar said the tech software firm remained committed to its “Team Anywhere” policy

He told the Herald in August the policy allows staff to work anywhere that it has a legal right to employ on a reasonable time zone. Atlassian has committed to anchor the 40-storey tower which has a development value of around $1 billion.

Construction is targeted to commence on the Central Place Sydney project in 2023, with the first stage of the project expected to be delivered in 2027.