The former Sydney home of Thomas Playfair has been beautifully stitched together by architecture studio Tzannes, leaving each of its parts with its own voice.

While many architects add new wings to historic buildings simply by copying the past, some of the finest additions to period structures take a considerably bolder approach. 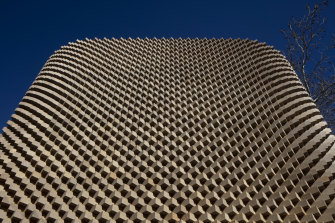 Constructed with hundreds of bricks, each one turned out to express its profile, the highly textured form simply encloses a stairwell and a bathroom.Credit:Brett Boardman

Playfair’s home – he was Lord Mayor of Sydney in 1885 and later became a member of Parliament – is one such example.

Located on the corner of Ridge and West streets in North Sydney, Playfair’s impressive three-level home, built around 1891, was at the end of a row of seven two-storey terraces.

While it may have once shone on its prominent corner, by the time Tzannes inspected the property, it was in a fairly sad state. Even the wrought-iron balustrades that wrapped around two sides of the balcony were faux. 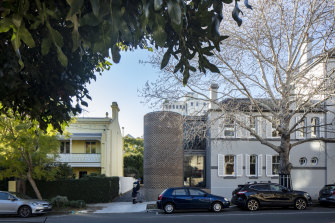 Even within the original footprint, there’s a clear distinction between what is new and what isn’t.Credit:Brett Boardman

“It was in a state of decay and needed immediate attention,” says architect Alec Tzannes, whose team worked closely with heritage architect Stephen Davis from Urbis.

The building, used as offices by an investment company, was meticulously restored in some areas and updated in others.

The impressive rooms within the original home are now individual offices where clients can meet privately.

“We were fortunate that some of the building’s features, such as the ornate timber staircase were intact and hadn’t been painted,” says Tzannes.

However, even within the original footprint, there’s a clear distinction between what is new and what isn’t.

Some of the doors, for example, are lined in fabric and have contemporary handles.

Other aspects, such as the ground floor windows facing West Street, are new but faithful to the shuttered Victorian-style windows directly above.

Some areas, such as the open plan office on the first floor, have a foot in both camps: the open plan workstations occupy what would have been an original room, complete with period detailing, while the new kitchenette is of today.

Between the two is a generous skylight that extends the length of the passage that offers views of the sky and vignettes of the old chimneys.

While Playfair would be delighted with the fine restoration, architecture and design buffs would certainly be impressed with the latest addition.

Constructed with hundreds of bricks, each one turned out to express its profile, the highly textured form to the rear simply encloses a stairwell and a bathroom.

Given its location on the northern edge of the property and bordering a lane to the company’s car park, this is an unusual and quite radical solution.

However, when one sees the way the natural light circles this two-level brick column, only a couple of metres wide, one fully understands the reasoning behind it – magical to say the least.

Slightly elevated above ground level, also on bricks but with a smooth base, it prevents cars turning the corner to reach the car park from causing any damage to the artistry of the carefully arranged bricks.

It’s also not simply a folly to slow down traffic, as the brief noted the requirement for additional entrances to the offices (now three in total including the original front door that leads directly to a boardroom).

“This means that people can use the boardroom independently of the offices and those arriving by car can simply come in without walking through the middle of an office,” says Tzannes.

For those wanting an architectural experience, the corbelled brick tower is the obvious choice.

For those who are in two minds about adding a contemporary extension to a heritage-listed building or even one that’s located in a heritage precinct, they would be well advised to take a look at the Ridge Street office.

It still retains that polite and genteel ambience that marked a fine residence.

But it also suggests what can be achieved when put into the right hands!