A corporate lawyer who recently represented the World Cup-winning women’s national team in an equal-pay case against US Soccer has joined the Justice Department in a top role overseeing the defense of Biden administration policies in court.

Brian Netter, a former clerk for Supreme Court Justice Stephen Breyer, has stepped down as a partner at the law firm Mayer Brown to become a top official in the Justice Department’s civil division, according to two people familiar with his move.

Under the Trump administration, appointees in the DOJ role crisscrossed the country defending some of the president’s most controversial policies in court.

The role is expected to remain visible during the Biden administration and require frequent court appearances, whether in person or virtual in light of COVID-19-related precautions, as Republicans mount legal challenges against the administration’s policies.

On Thursday, a group launched by the former Trump advisor Stephen Miller joined the Texas attorney general in a case accusing the Biden administration of exposing Americans to a heightened risk of coronavirus infection by allowing some migrants who cross the border with Mexico to be released into the US.

Miller, a driving force behind the Trump administration’s hard-line immigration policies, founded the group with the backing and a board that includes Trump’s former White House chief of staff Mark Meadows.

The group, America First Legal Foundation, has been billed as a conservative version of the American Civil Liberties Union. 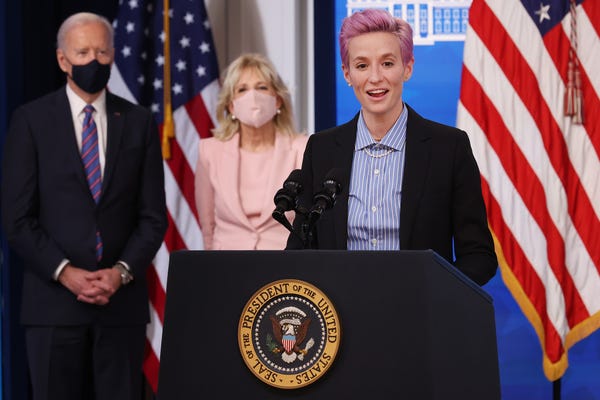 A graduate of Yale Law School, Netter clerked for Judge Judith Rogers on the powerful federal appeals court in Washington before working for Breyer from 2010 to 2011.

At Mayer Brown, he has represented the women’s national team — including prominent players such as Megan Rapinoe and Alex Morgan — in an equal-pay case against US Soccer.

A federal judge last year rejected the players’ demands for pay equal to that of the men’s team. But a separate ruling earlier this month, in which the judge signed off on a settlement over working conditions, has cleared the women’s team to pursue an appeal.

Netter’s roster of corporate clients includes the defense contractor Northrop Grumman, Shell Oil Co., and AT&T, according to a review of court records.

He filed paperwork in various courts Tuesday withdrawing from pending cases but did not disclose his appointment to a top Justice Department role.

Biden has yet to nominate his pick to lead the Justice Department’s civil division. Brian Boynton, a former partner at the law firm Wilmer, Cutler, Pickering, Hale, and Dorr, has been serving as the division’s acting leader since January.

A Justice Department spokesperson did not immediately respond to a request for comment about Netter’s appointment.