Days after he was indicted on charges including grand larceny and tax fraud, Allen Weisselberg was spotted driving into the Trump Organisation’s gleaming Fifth Avenue headquarters, dutifully reporting for work as he has for the last four decades.

While it looked like business as usual, the Trump Organisation had already started excising its chief financial officer from a myriad of its businesses across the country where he was a director or executive. Dozens of entities tied to the company, from the Mar-a-Lago resort to a Scottish golf course, scrubbed Weisselberg’s name from documents. 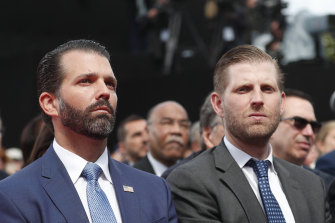 The president’s sons, Donald Jr (left) and Eric are executives in the Trump Organisation.Credit:AP

The move sidelines the most important person not named Trump at the New York-based organisation, leaving the business – at least on paper – more firmly in the hands of the ex-US president’s sons Donald Trump Jr. and Eric Trump.

It comes at a precarious time for the Trump Organisation, which along with Weisselberg was charged with 15 felony counts in New York. The real estate company is attempting to sell properties including its Washington hotel and navigate more than $US590 million ($789 million) of debt that comes due in the next four years. More than half of that is personally guaranteed by Donald Trump.

The company and Weisselberg pleaded not guilty to all charges. The Trump Organisation didn’t respond to a request for comment about its leadership. A Trump spokeswoman referred questions to the company.

While Trumps are the name and face of the company, it’s Weisselberg, 73, who had been overseeing most of the business as one of Donald Trump’s most trusted executives, according to two people familiar with Trump Organisation, who asked not be identified speaking about its inner workings. He, Don Jr. and Eric Trump oversaw the trust that held all of Trump’s assets while he was in office.

Since leaving the White House in January, Donald Trump has shown little sign of returning to running the organisation. He’s been seen once a week or so at the tower that bears his name in midtown Manhattan, as he summers in his nearby New Jersey golf club. But the former president seems largely focused on exacting revenge from his political enemies, imposing his will on the Republican Party and attacking tech companies that have deprived him of his biggest platform.

That means, according to filings, that the Trump Organisation is being led by Eric and Don Jr., both executive vice presidents. The company’s properties are held in dozens of separate entities that are overseen by the leaders at the organisation.

The more than 40 amended or newly filed annual reports that removed Weisselberg last week in Florida show Eric as president on more than half of them, and Don Jr. in that role on the remainder. The list comprises every entity that Weisselberg was once tied to in the state, which publishes filings from private companies.

The Washington Post reported on Tuesday that Weisselberg has resigned from all of the company’s subsidiaries that he was tied to, citing a person familiar with the matter. The CFO was listed in a leadership role at more than 70 entities across the country, from one in Washington state to seven in Washington, DC, according to public records. The Washington Post said he’d been removed from some of them days before the July 1 charges were filed.

Don Jr. and Eric’s sister Ivanka, who was a Trump Organisation executive vice president prior to her stint as a White House adviser, isn’t visibly involved. She’s often photographed on the beach with her children or hand-in-hand with her husband in Florida, rather than in the New York social scene she inhabited pre-presidency. 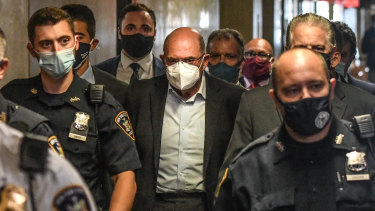 Since his father left office, Don Jr., 43, has been busy politicking in Florida. Even early into his tenure as executive vice president, it was rare to see him in the office at Trump Tower, a person with knowledge of the business said. He was elevated to chief political adviser to his father earlier this year, according to CNN, and frequently makes social media posts ridiculing President Joe Biden. On the day the company was charged, he posted a video calling it a witch hunt.

“How is this anything but political persecution?,” Don Jr. said, two bobbleheads of his father visible in the background.

Eric, 37, was the last of the three to buy a home in Florida, maintaining his residence in New York, where the Trump Organisation is still headquartered. He played a more public-facing role in the company throughout the presidency, making appearances at properties and in press stories.

Weisselberg’s importance to the former president far eclipsed his public presence. He served the family for more than 40 years and was the only person not named Trump whom the ex-president trusted with his money. He negotiated Trump’s loans, was a co-signer on his accounts and helped arrange his taxes.

In his 2004 book How to Get Rich Trump said, “He’s been with me for thirty years and keeps a handle on everything, which is not an easy job.”

Now, with the distraction of the criminal case against him, Weisselberg is taking dozens of small steps back from the business. His loyalties to the Trump Organisation and Trump himself are currently being tested as his cooperation with the district attorney could lead to a more expansive case against the company.

The former president’s name also is nowhere on the documents that Weisselberg was removed from. The day before the company was charged alongside Weisselberg, Trump was visiting the southern border, accusing his successor of destroying the country. He spoke this week at the Conservative Political Action Conference, and in between those appearances – at a campaign-style rally in Florida – he condemned the New York indictments, calling them politically-motivated.

With Eric and Don Jr. now the sole people listed on the dozens of Florida entities, they may be set to leave a greater mark. During the presidency, the pair tried and failed to start two new hotel brands in the South, but other than that haven’t done much publicised business other than putting properties up for sale.

The biggest deal for the Trump Organisation this year was actually done by a partner in one of its most valuable assets. Vornado Realty Trust refinanced debt on an office tower in San Francisco that Trump holds a 30 per cent stake in, enabling a $US617 million cash-out for its owners. That money may come in handy as the company deals with the debt coming due.

“We are one of the most under-leveraged real estate companies in the country relative to our assets,” Eric Trump said at the time of the Vornado bond sales.