Editor’s note: This story was originally published in October 2014, in the wake of civil unrest in Ferguson, Missouri, after Officer Darren Wilson shot 18-year-old Michael Brown to death. Weeks of protests ensued, in which destruction of property was called a “violent” act by those on the right. In the years since, little has changed. On May 26th, 2020, George Floyd was killed when Officer Derek Chauvin kneeled on his neck, as onlookers pleaded for him to stop, and he himself said, “I can’t breathe.” Protests erupted in Minneapolis, and have since spread across the country. Once again, some are criticizing the destruction of property as somehow equal — or worse — than the destruction of lives.

After Officer Darren Wilson shot teenager Michael Brown dead this summer, Ferguson, Missouri, erupted with outrage, compassion and street protests. The response from many corners of the commentariat was predictable: condemnations of those “bad elements” among the protesters who resorted to property destruction as their demonstration of resistance. After two more high-profile incidents of cops shooting St. Louis black men to death, protesters even burned Old Glory, eliciting still more scandalized gasps from the usual crowd.

While drunken, rioting white college students may be surprised by how the cycle of condemnation plays out, it’s a familiar refrain for anyone who’s been involved in Occupy Wall Street, the anti-Iraq War movement, or any of dozens of other protest cycles: The “good” protesters march, carry signs and make their voices heard, but anyone who smashes, burns or vandalizes contaminates the otherwise defensible show of democracy.

This attitude is complicated by the facts, to say the least. In fact, the historical pedigree of property destruction as a tactic of resistance is long and frequently effective. To cite just one example, in recent years the largest police reform packages were only adopted after large-scale rioting. Here are nine more instances to call into question the conventional wisdom about good old Smashy-Smashy.

Go figure: The 2010 libertarian-conservative insurgency claimed historical lineage from an act of property destruction. In 1773, British Parliament adopted the Tea Act, which encountered resistance across the Atlantic not, as is so often supposed, because it hiked taxes (it effectively lowered them), but because it imposed the supremacy of a capitalist monopoly, the East India Company, over the political rights claimed by colonists – as Englishmen. Some wildcat radicals left a Boston political meeting over the objections of a frustrated Samuel Adams, dressed up as Mohawk warriors (the better to preserve their anonymity – perhaps prefiguring a black bloc), and destroyed 342 chests of tea in Boston Harbor as an act of protest. Workers had produced that tea, capitalists had risked investment on it, and it was not the colonists’ to destroy, but they said “fuck property rights” and did it anyway. Today’s conservatives don’t seem bothered by this inconvenient history, though, because think of the dress-up opportunities! 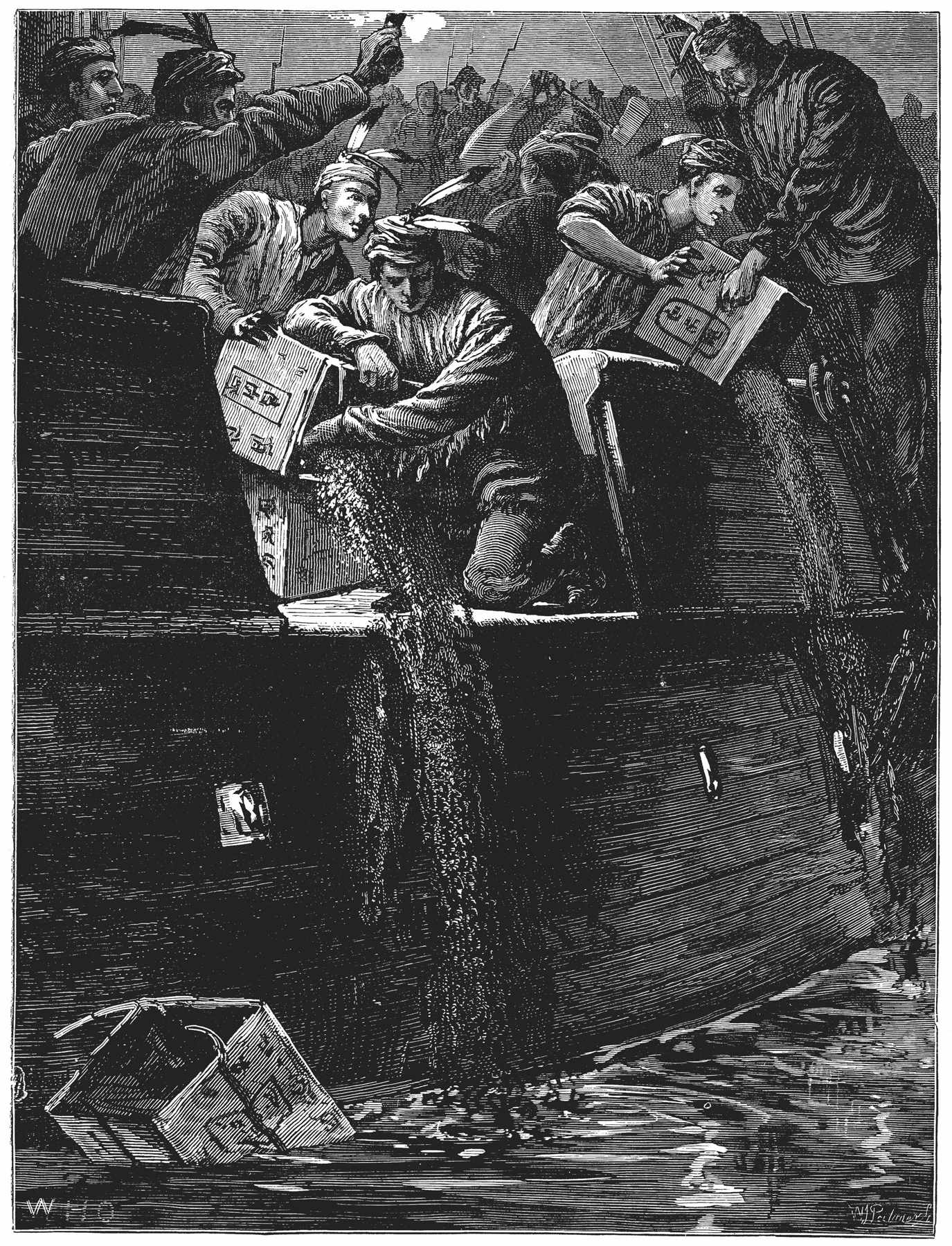 In 1502, Christopher Columbus arrived in what is now Panamá to a people who were suspicious of his intentions, even though they didn’t know about his ambitions for conquest, or his history of cutting off appendages of Arawak and Taino people in the drive for gold. When local Ngäbe leader el Quibian began to trade with and house Columbus and his brother Bartolomeo, he made the colonialists commit not to overstaying their welcome or go too far down the rivers. Eventually the Columbus brothers tried to trick and execute el Quibian, but he escaped, organized an alliance with his neighbors, and destroyed Bartolomeo Columbus’ ship as it attempted to stray further down a river than was agreed upon. The ship didn’t stand a chance, and neither did the Columbus brothers. Over 500 years later, the Ngäbe people are still free and largely autonomous, and still having to destroy the property of colonialists who try to steal their land. We recommend taking a shot of seco herrerano to el Quiban next Columbus Day.

There is a longtime debate among historians about why Black subjects of chattel slavery in the U.S. had fewer major rebellions than their counterparts in the Caribbean and Brazil. Many major rebellions were prevented before they began, and others were suppressed too quickly, but much has been written on the other forms of class war waged by slaves, from work slowdowns, to escape, to the sabotage of the property of the planters. Samuel, a slave under prominent Natchez, Mississippi, politician John Quitman, broke an expensive new plow. Another slave injured some of Quitman’s family by driving a carriage into an embankment on the way to a wedding. The number of these incidents are countless, and most went unrecorded, but the property was always fair game to those people who themselves were considered property.

The word “sabotage” itself comes from an old form of property damage used for class struggle. If bosses tried to get one over on workers, the workers would respond by chucking a shoe (or sabot) into the machinery of production. This tradition was carried on by the Irish immigrants in Pennsylvania‘s coal mines in the 1870s, who had experience with class struggle against landlords back in the homeland. After emigrating across the Atlantic Ocean, they found that in order to demand safety in a very deadly workplace, fight wage theft, and gain basic labor rights, they had to create secret societies like the Molly Maguires to bomb train tracks and destroy coalmines. If they couldn’t work in the mines safely, no one should be working in them.

On March 10th, 1914, in response to the arrest of suffragette leader Emmeline Pankhurst a day prior, Mary Richardson brought a meat cleaver into the National Gallery in London, and slashed up the shoulders, back, and neck of Venus, as painted by Diego Velazquez. Richardson later explained that she objected to “the way men visitors gaped” at the nude body, prone on a bed and admiring her reflection in a cherub-held mirror. “If there is an outcry against my deed,” Richardson said, “let every one remember that such an outcry is an hypocrisy so long as they allow the destruction of Mrs Pankhurst and other beautiful living women.” In the end, the painting was restored, Richardson’s political leanings took a sharp right-hand turn, and British women obtained the right to vote. 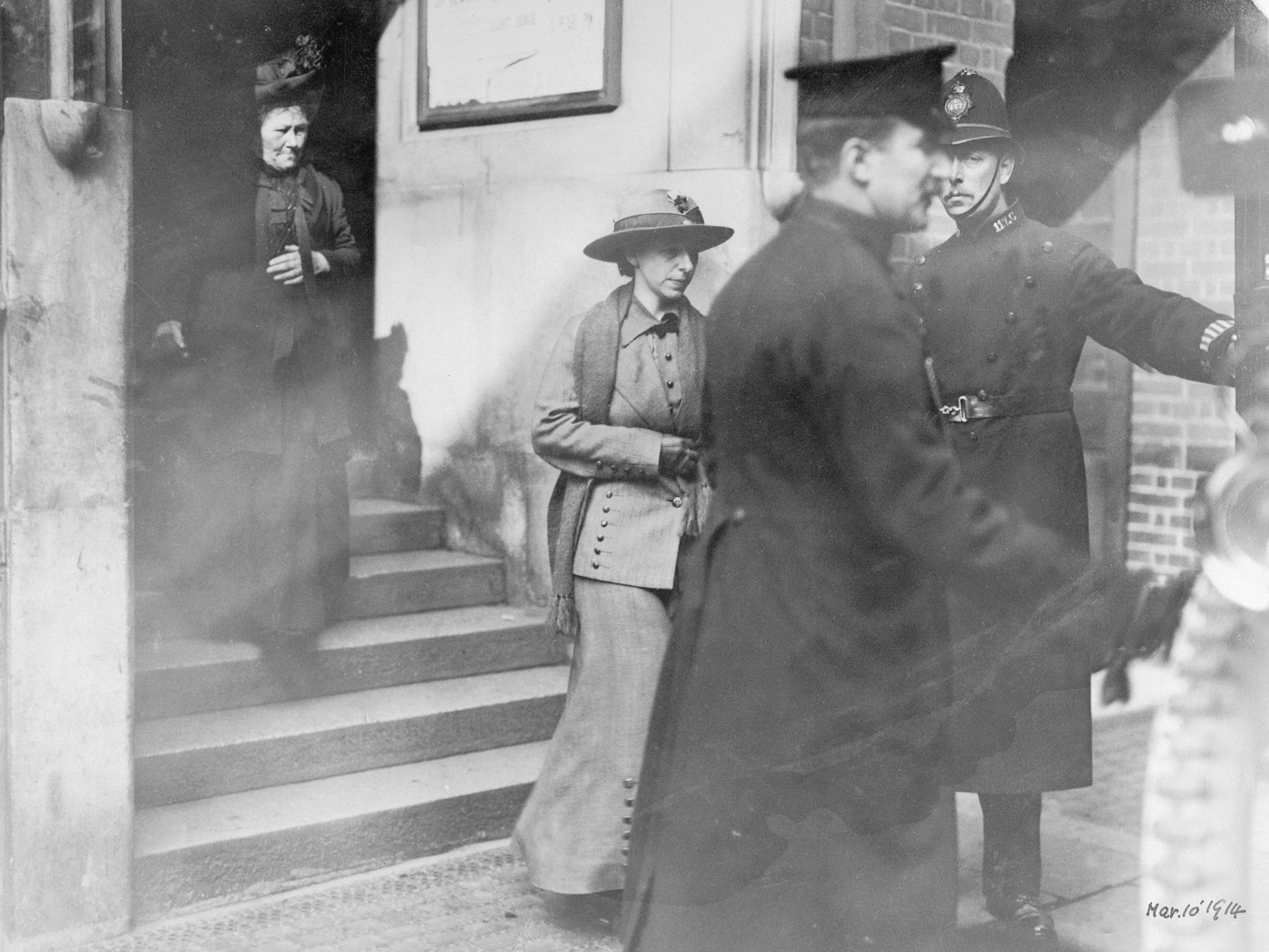 After the passing of Nelson Mandela last year, there was an all-too-typical attempt to whitewash his past – but the Apartheid regime was not defeated by Western rockstars demanding Mandela’s freedom alone. In the early 1960s, Mandela organized the Umkhonto we Sizwe (the MK) guerrillas alongside the South African Communist Party. The MK bombed the communications, transit and energy infrastructure that helped run the Apartheid economy. Mandela considered the sabotage a necessary method of escalation that would hopefully preempt the need for guerrilla warfare (which he and his associated did not take off the table). For this, Mandela was branded a terrorist by Western governments, which have in the intervening decades gotten no better at accurately applying that label.

Trespassing onto a Pennsylvania General Electric Nuclear Missile facility in September 1980, a group of eight pious Christians, among them priests and nuns, took hammers to the nose cones of two Mark 12A warheads and poured their own blood on the facility’s papers in a call for peace. The Biblical injunction for such destruction can be found in the Book of Isaiah’s prophesy that the people of many nations “shall beat their swords into plowshares, and their spears into pruning hooks: national shall not lift up sword against nation, neither shall they learn war any more.” The “Plowshares Eight” did prison time for their activism, but today remain unrepentant. Hallelujah.

8. Tear Down This Wall

The dismantling of the border dividing Berlin happened in phases. First, over the course of the fall of 1989, as sweeping border reforms precipitated a refugee crisis throughout the Soviet bloc, East Germans withdrew their political consent for the division of Germany, with rallies reaching the hundreds of thousands in East Berlin by early November, forcing the government to loosen the border. Owing to a botched announcement, people gathered in enormous numbers on the evening of Novermber 9th, overwhelming the border-enforcing soldiers. Having effectively destroyed the legal/social border, the East Germans took it upon themselves to physically destroy its concrete representation, showing up with renegade sledgehammers and, woodpecker-like, creating new crossing points, leading to more official action. It seems now that over half of East Germans miss communist party rule, but don’t let that mitigate the badassery of literally smashing an oppressive border – a model Palestinians have tried to emulate with the land-grabbing separation wall that encloses the West Bank.

Indigenous resistance in the Americas is not a story that ends centuries ago with the survivors of genocide left in poverty on reservations – it is still being written. The M’ikmaq people of the Elsipogtog First Nation took a stand against corporate resource extraction in 2013 when they spent months sabotaging efforts to start fracking near their land. When they blockaded the Southwestern Energy subsidiary’s exploratory trucks, the Royal Canadian Mounted Police moved in with overwhelming force, pointing snipers at areas with small children and M’ikmaq elders. Someone in the community responded by setting five RCMP vehicles on the scene afire, and other police vehicles were damaged in later clashes. The fracking still hasn’t begun, and at least one Canadian province has since banned fracking, proving that, once again, direct action gets the goods.