A small flotilla of boats returned to Miami on Saturday evening after motoring off Cuba’s coast and setting off fireworks and flares in a show of support for the Cuban people and democracy.

The boaters had left Miami on Friday morning.

“We also want to draw the attention to the United States government that they have to do something,” organizer Jose Portieles told The Associated Press. “We feel identified with what is happening in the protests in Cuba. We could be the ones who are there.”

“We also want to draw the attention to the United States government that they have to do something.”

Cuba considered the boats a provocation. Cuban Foreign Affairs Minister Bruno Rodriguez called the flotilla illegal and urged the U.S. government to halt them “to avoid incidents which are not in anyone’s best interest.”

The U.S. Coast Guard warned the boaters it would be illegal for them to depart U.S. waters with the intention of entering Cuban territorial waters. However, for those intending only to go near Cuban waters, the agency merely advised against doing so.

“They’re going to see that we’re there for them.”

Portieles said most of the boaters were Cuban-American entrepreneurs who know each other from the South Florida boating community and share a desire to see a free Cuba.

Cubans historically took to the streets earlier this month in massive numbers to protest food shortages, high prices and other grievances against the government. 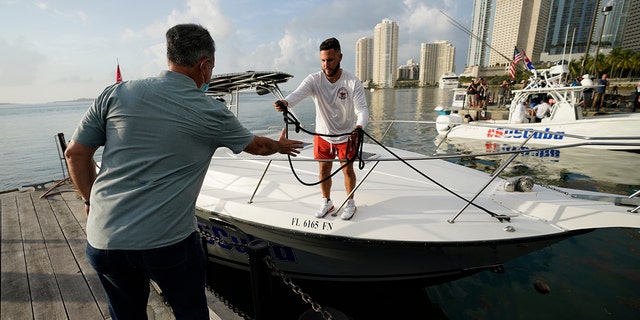 Cuban President Miguel Díaz-Canel acknowledged government shortcomings in the lead-up to the unrest in the country after the protests broke out.

He has been widely criticized for the country’s violent crackdown and Internet blackouts.

“We have to gain experience from the disturbances,” he said in an address earlier this month. “We also have to carry out a critical analysis of our problems in order to act and overcome, and avoid their repetition.”

Fox News’ Edmund DeMarche and The Associated Press contributed to this report.