As we enter the age of the purpose-built EV — a shift that started with Tesla and now includes Volkswagen, Porsche, Cadillac, and a pile of startups from Rivian to Fisker — it's worth taking a quick look back to the olden days of electric cars.

By which I mean vehicles engineered on ye olde platforms. The Nissan Leaf, which launched in 2010 and shared its identity with the Nissan Versa. Or the Chevy Bolt, whose EV undergirding was original, but whose bodywork antecedent for  was the Chevy Sonic. Or the new MINI Cooper SE Electric, which is … a MINI Cooper SE … that's electric.

Over the past year and a half, I've checked out the latest version of the Nissan Leaf Plus, the Chevy Bolt EV, and the MINI Cooper SE Electric — a trio of compact/sub-compact, all-electric hatchbacks. So I figured a little EV rodeo would be in order.

Here's how the vehicles fared: 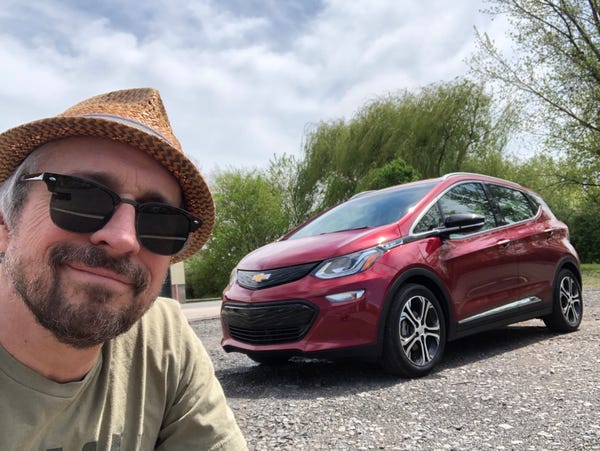 The Bolt has been updated to deliver 259 miles of range per charge, an improvement on the 240 miles that we enjoyed back in 2017 when I first tested the EV. 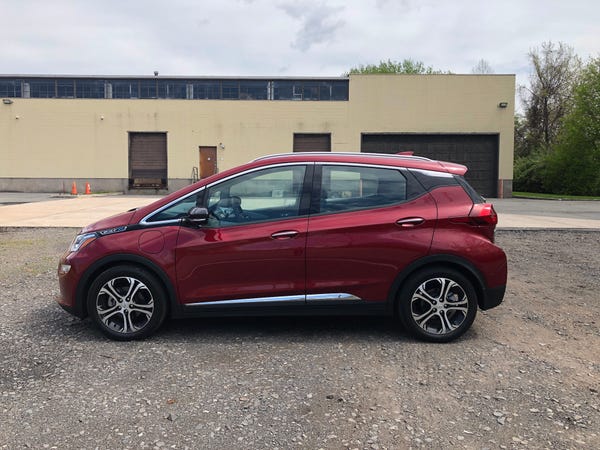 The Bolt remains a subcompact hatchback, a modest platform for such an important vehicle. The base price was $41,020, but a few thousand bucks in extras took the sticker to $44,130, as-tested. 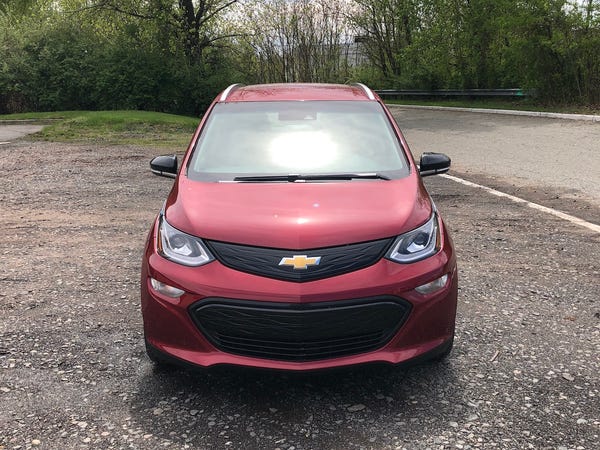 My tester's interior was "Dark Galvanized Gray." While it was far from upscale, it was comfy and pleasant. The rear bench seats were also pretty good, for the segment.

The multifunction steering wheel is nothing special, but it was heated in the Premier trim. The front seats were also heated. 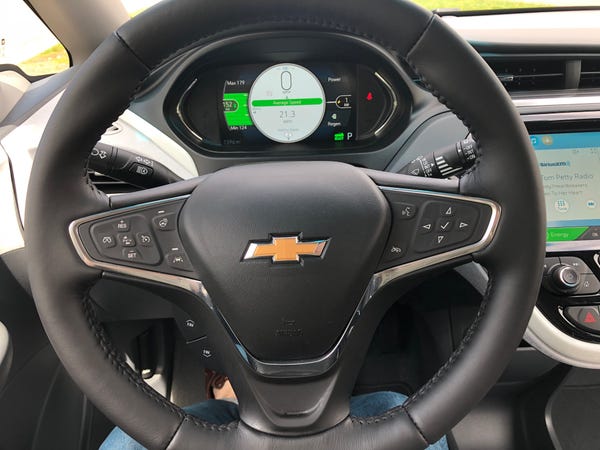 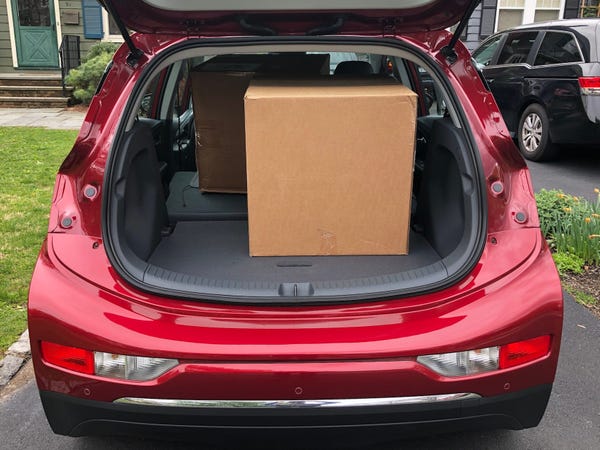 For gearheads, popping the hood on an EV can be sort of dispiriting. The Bolt's 66-kilowatt-hour battery pack is actually located under the vehicle's floorboards. The Bolt's drivetrain has a single motor over the front wheels, with a single forward gear. The total power output is a peppy 200 horsepower. 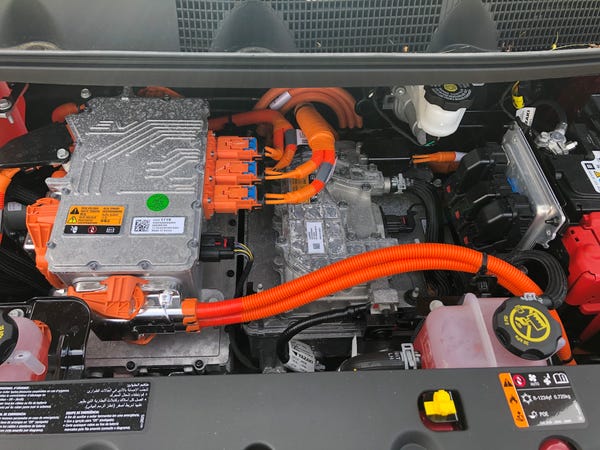 According to Chevy, the Bolt can return four miles each hour to the battery at a 120-volt charger, and can get back to full in ten hours on 240-volt. A DC fast-charge returns 100 miles to the battery in 30 minutes. I used ChargePoint, a EV service with locations in my New Jersey suburb. 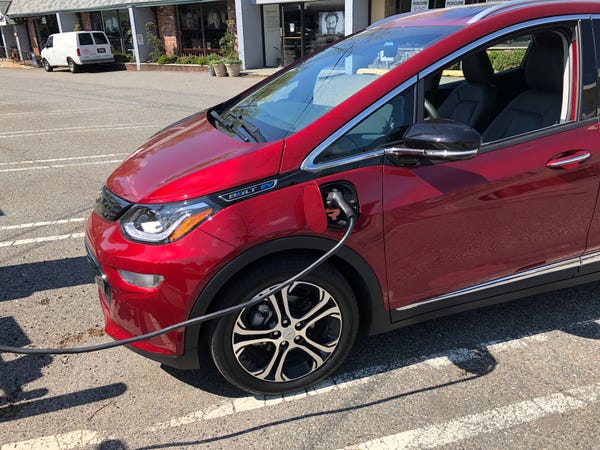 The Bolt does a good job of using regenerative braking and a regen paddle on the steering wheel to keep battery charge optimized. If you aren't hitting the freeway and taxing the battery, it's possible to putter around town for a week and still have more than 100 miles in the "tank." I ended up with 135 miles in reserve.

The infotainment system runs on a responsive, colorful 10.2-inch touchscreen. In my tester, it was upgraded with a $595 package. There's a suite of apps, 4G LTE Wi-Fi connectivity, Bluetooth pairing, USB ports front and rear, a premium Bose seven-speaker audio system, wireless charging, and available Apple CarPlay and Android Auto — but no GPS navigation. 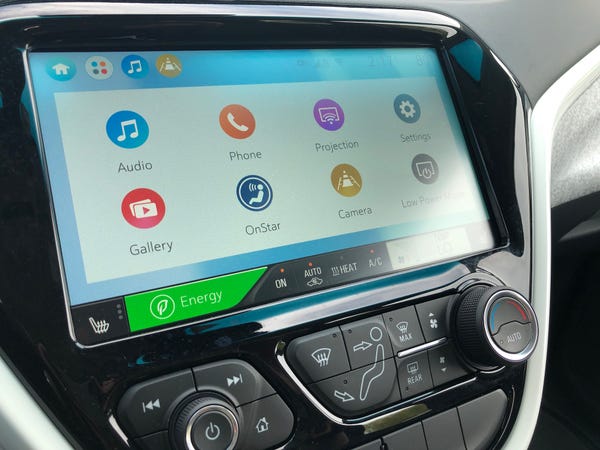 The SL Plus trim level has a 62-kilowatt-hour battery. The larger pack adds roughly 70 miles of range compared to the standard Leaf's 150-mile battery. 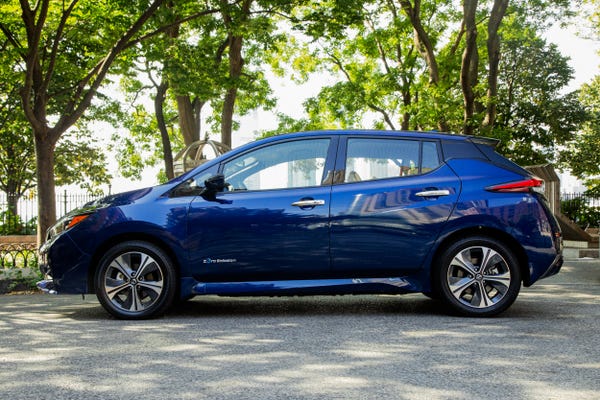 The Leaf is the top-selling EV globally, which makes sense as the car has been around since 2010. More than 400,000 have been sold. The Japanese automaker's goal in launching the car was to embrace a "zero emission" future. It hasn't quite worked out that way, but the company is making progress, and Leaf is still with us. 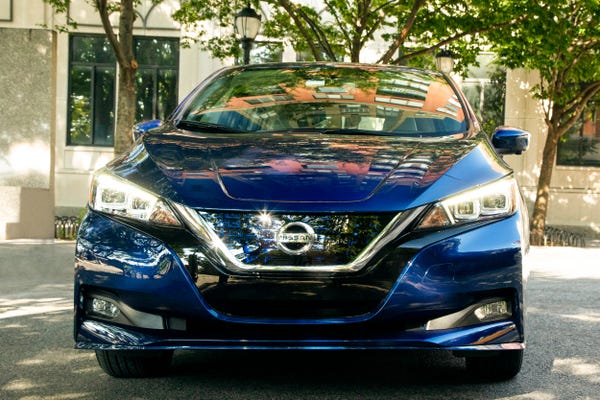 The Leaf's "Light Gray" interior was pleasant, if a bit shy of premium. The seats were comfy, and there was a reasonable amount of space to stow small items. The back seat was about average, space-wise, for the segment. 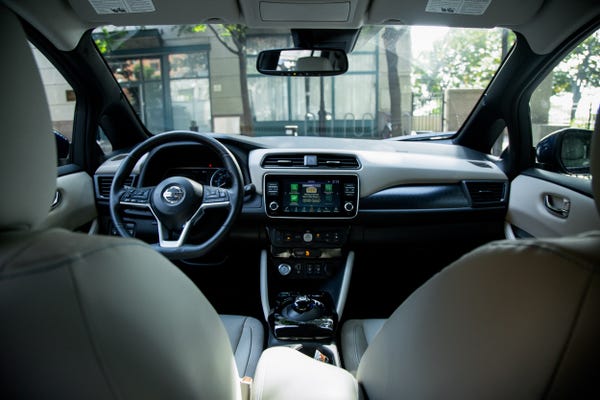 The small, toggle-y shifter is certainly unique, but in practice, it's quite easy to use. 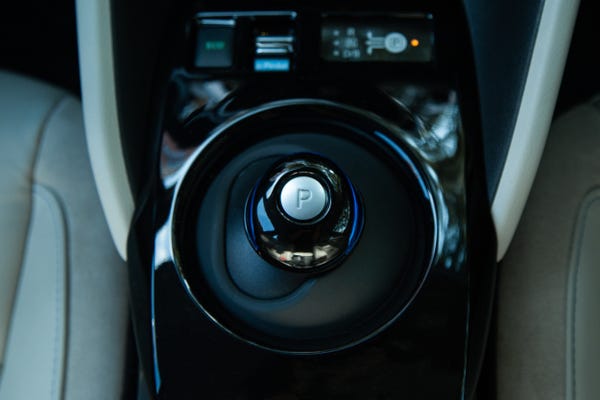 The Leaf's cargo area is an excellent 24 cubic feet, expandable to 30 with the rear seats dropped. The hatch's opening is a tad awkward, with a sort of oval shape.

Charging is unchanged from other Leaf example I've tested year, at least as far as the ports go. There are two, one for 240V "Level 2" charging and one for fast DC charging.

Our Leaf SL Plus had a 160-kilowatt electric motor, making a juicy 214 horsepower with 250 pound-feet of torque.

The Leaf also has regenerative braking. And when the e-Pedal feature is engaged, it's possible to drive the car using motor braking almost alone, putting power back into the battery. 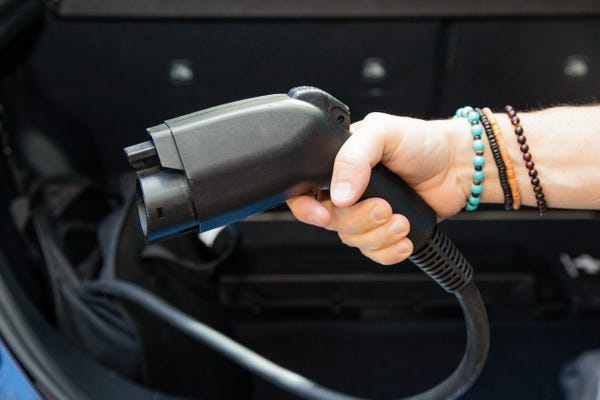 I used the ChargePoint network and did fine with two rounds of 240V charging over the course of a week. It's also possible to install your own 240V ChargePoint unit at home; one can be purchased for about $500, with installation handled by a qualified electrician.

I also used the Nissan Connect iPhone app to monitor charging and to manage climate control and vehicle diagnostics.

The Leaf's eight-inch color infotainment display looks good, but I'm not the biggest fan of the system's layout. It is easy to use, and Bluetooth device-pairing is a snap. You also have available Apple CarPlay and Android Auto. 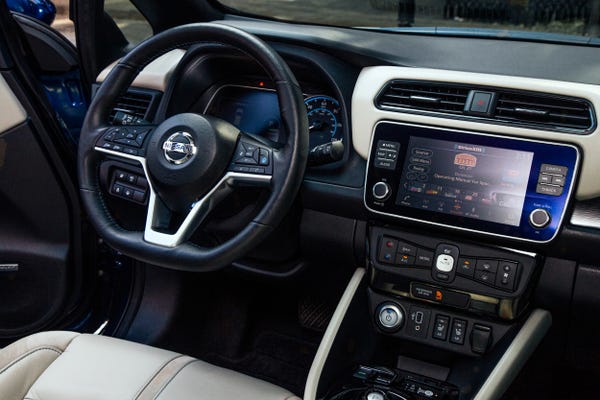 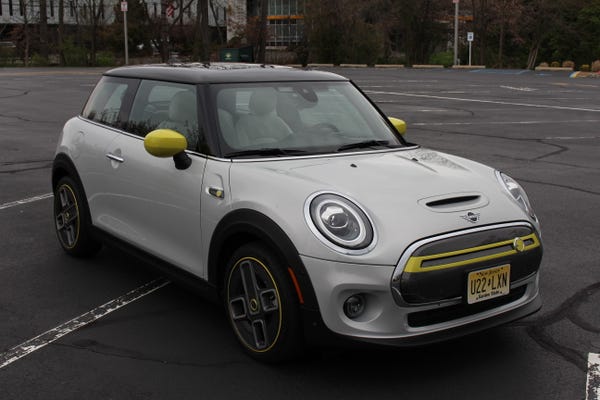 Now, because this MINI has gone electric, the trim elements are a flashy neon yellow. Some might not care for the choice, but it does continue MINI's history of daring design cues. 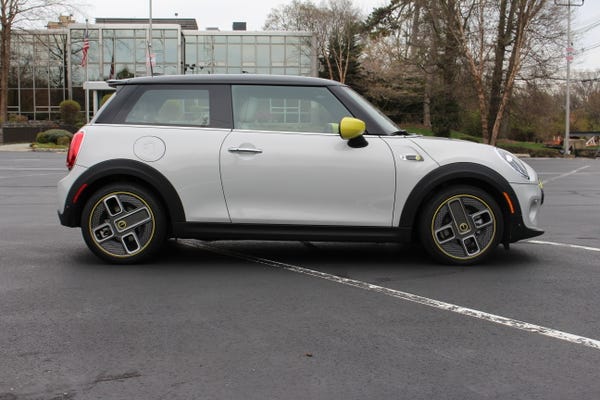 It's an open question whether that matters. Some electric cars advertise their electric-ness, but the MINI Electric wants to look like a MINI and to capitalize on the design's considerable appeal. 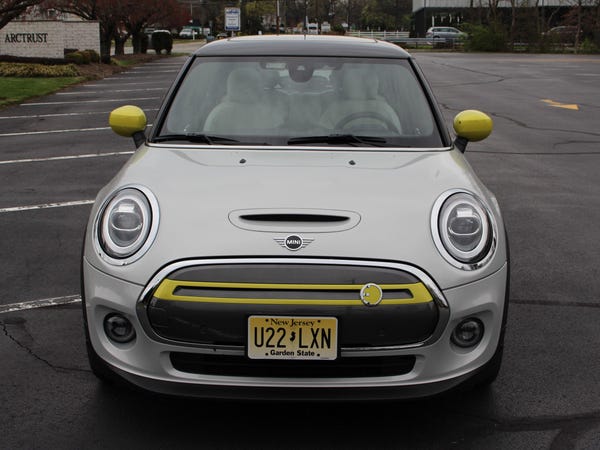 Inside, the MINI Electric combines premium materials with snazzy design. My tester's interior was "Chesterfield Satellite Gray" leather, with an anthracite headliner and some MINI-Electric-specific elements. The front seats on my tester were heated. 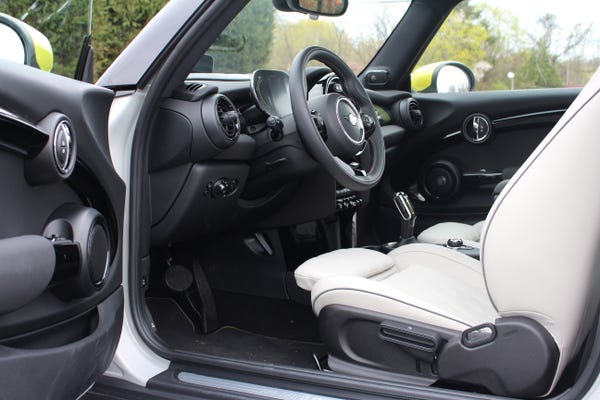 The MINI Electric's interior is among the most luxurious I've experienced in an electric car. But it is a two-door, and the back seat is very cozy. 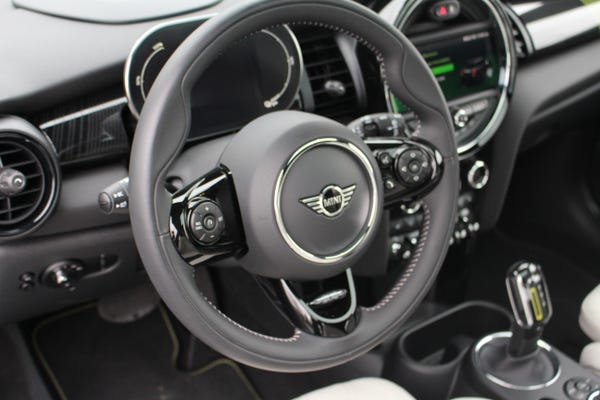 You have to drop the rear seats to have enough space for anything beyond low-key shopping trips. When the rear seats are up, the cargo area is a mere 7.5 cubic feet. 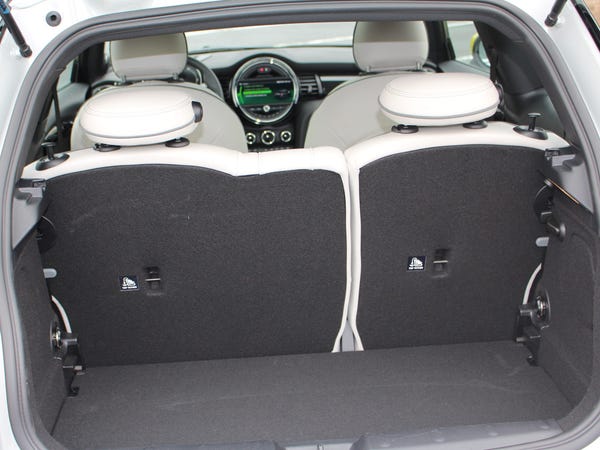 The drivetrain consists of a 33-kilowatt-hour, lithium-ion battery, paired with a 135-kWh motor that generates 181 horsepower with 207 pound-feet of torque. The transmission is a one-speed unit. 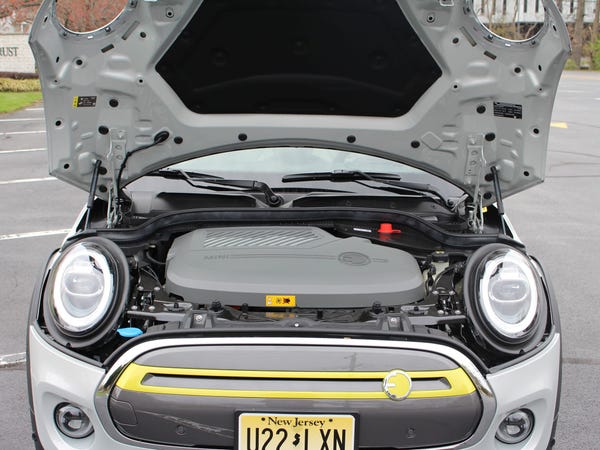 I used ChargePoint's network to recharge the MINI at a Level 2 spot. If the MINI is completely drained, the battery could come back to a full charge in about six hours, in my testing. I was looking at going from about 40% to 100% in four hours. Many owners might want to install Level 2, 240-volt charging units at their homes, and the car does comes with an onboard cable. 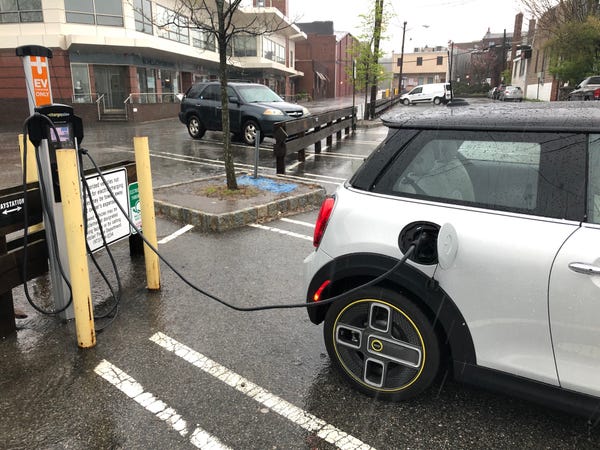 The MINI system is undergirded by parent BMW's iDrive tech. Bluetooth pairing is easy, and there's USB device connectivity, along with GPS navigation. It can be operated using a knob-and-buttons interface on the console between the front seats. 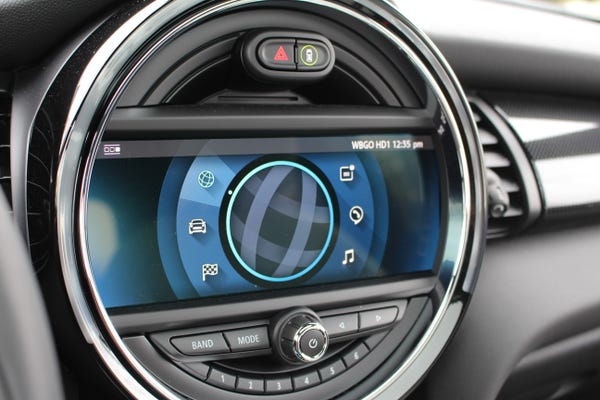 And the unlikely winner is the MINI! 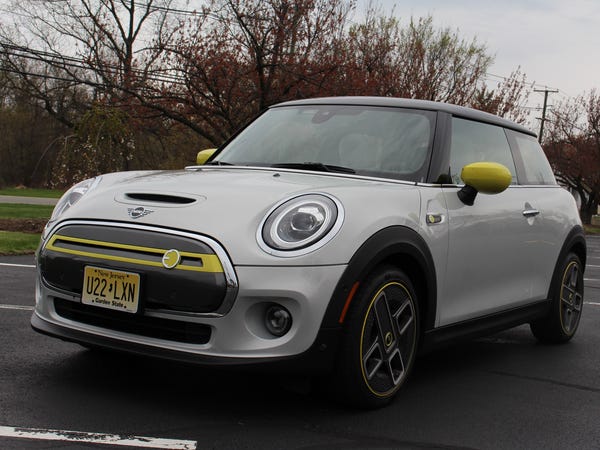 In my review, I wrote that "the MINI Electric can dash from 0-60 mph in about six seconds, so it isn't exactly fast by the clock — but the immediate torque makes it feel quick. "I struggled with this car like no other to keep at the legal speed limit on the highway," I wrote.

Shocking, right? MINIs are famously fun to drive, and the electric MINI is … a fun EV to drive!

Clearly, I'd be recharging Mr. MINI a lot, were I to own one. But I'd be smiling as the electrons poured in. And while the Bolt and the Leaf aren't un-fun to drive — the Bolt, in particular, has a go-kart-ish demeanor — the MINI is so, so much more fun that it tips the balance. For what it's worth, it's also the cheapest of the three, as-tested.

Yes, if I were looking for practicality, the 200-plus-mile ranges of the Bolt and Leaf, not to mention four doors, make them better choices. The Chevy and Nissan are also superior cargo-haulers.

But the MINI is electric joy. And that's important because EV's should be pleasurable as well as virtuous. The MINI brilliantly combines both qualities — and simply won't let you drive 55!

Disclosure: We may receive a commission if you click on car insurance quotes from our partners.

Watch the new ‘Got Milk?’ ads

This small business stood for a century, but Covid-19 closed it in months

CEO fears Japan could lose a fifth of its restaurants

Thomas Keller on PPP loans: One size doesn’t fit all

Here’s where meat prices are headed

Hundreds of people lined up outside of Vegas casino for food

Global food supply chain at risk due to pandemic

San Francisco (CNN Business)7-Eleven, known for its neon-colored Slurpees and oversized sodas, is looking to show off its range by promoting some up-and-coming healthy snack brands at a subset of stores.

The convenience store chain on Tuesday will launch the second iteration of its Sips & Snacks initiative, a program intended to bring a different mix of products into 7-Eleven locations and provide potential launching pads for small and emerging food brands.
This year’s batch includes 25 brands known well in the natural foods arena but not necessarily on the mainstream stage. Some of the products include Pescavore ahi tuna jerky strips; Quinn gluten-free pretzels; Outstanding Foods PigOut pigless pork rinds; Koia plant-based, vegan protein shakes; and Pop Zero algae oil popcorn.
PALM SPRINGS, CALIFORNIA – FEBRUARY 27, 2019: A 7-Eleven convenience store in Palm Springs, California. (Photo by Robert Alexander/Getty Images)
This website uses cookies to improve your user experience and to provide you with advertisements that are relevant to your interests. By continuing to browse the site you are agreeing to our use of cookies.Ok