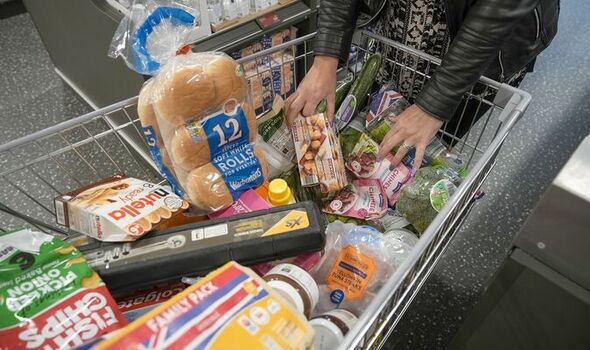 Helen Dickinson OBE, Chief Executive of the British Retail Consortium, said that some of the biggest rises were seen in dairy products, including lard, cooking fats and butter.

The rate of Consumer Prices Index inflation rose to an annual rate of 9.4 percent in June – up from 9.1 percent in May, the Office for National Statistics (ONS) said.

It means inflation in Britain remains at the highest level since February 1982 and heaps yet further strain on cash-strapped households and businesses.

Helen said: “July saw the highest rate of shop price inflation since our index began in 2005, as heightened cost pressures continued to filter through to customers.

“Rising production costs – from the price of animal feed and fertiliser to availability of produce, exacerbated by the war in Ukraine – coupled with exorbitant land transport costs, led food prices to rocket to seven percent.”

Non-food prices also accelerated to three percent in July, up from 1.9 percent in June – this was a record-high, beating the previous record of 2.2 percent in April 2022.

Fresh food inflation soared to eight percent in July, which is well above the 12 and six-month average price growth rate of 2.9 percent and 4.8 percent, respectively.

But she said retailers are doing “all they can to absorb much of these rising costs as possible” and are looking for efficiencies in their businesses and supply chain.

She added: “With households enduring a cost-of-living crunch, retailers are expanding their value ranges to offer the widest variety of goods to those most in need, providing discounts to vulnerable groups, and raising staff pay.

“Nevertheless, households and businesses must prepare for a difficult period as inflationary pressures hit home.”

The persistence of high inflation is a key concern for Britons struggling to cope as the energy bills, food prices and the cost of filling a car are all rising at concerning rates.

Inflation is expected to peak slightly over 10 percent by the end of the year. And on Tuesday, Unilever’s chief financial officer Graeme Pitkethly said the worse is yet to come.

He said: “We expect peak inflation to come in the second half of the year.”

And Andy Searle, a partner at consultancy Alix Partners, said: “We’re not going to go back to the previous low inflation environment – we’re going to be stuck in this environment for a significant amount of time.”

Mike Watkins, Head of Retailer and Business Insight, NielsenIQ, said: “Consumers’ household budgets are coming under increasing strain and shelf price increases in both food and non-food have accelerated in recent weeks as more cost prices increases come through the supply chains.

“The grocery industry, in particular, is under intense pressure as retailers try to shield customers from the full impact of inflation.

“At the same time, there has been an increase in competitive intensity so customer retention over the summer holiday season will be key to help stem any further fall in volumes.”