Sen. Sheldon Whitehouse last week refused to apologize for his family’s membership in a reportedly all-White beach club in his home state of Rhode Island, calling beach clubs “a long tradition” and saying he hopes the club will admit minority members soon.

The senator’s office on Monday denied that the club has discriminatory policies and said it does have minority members.

Whitehouse, D-R.I., was asked about his family’s membership in Bailey’s Beach Club, officially known as Spouting Rock Beach Association, by GoLocalProv in a video that was posted on Saturday. The interviewer cited comments Whitehouse made in 2017 that he hoped the highly-exclusive club would begin to accept minority members and asked Whitehouse’s reaction to it allegedly not doing so.

“I think the people who are running the place are still working on that and I’m sorry it hasn’t happened yet,” Whitehouse said.

GoLocalProv asked Whitehouse whether exclusive clubs with all White members should “continue to exist.” 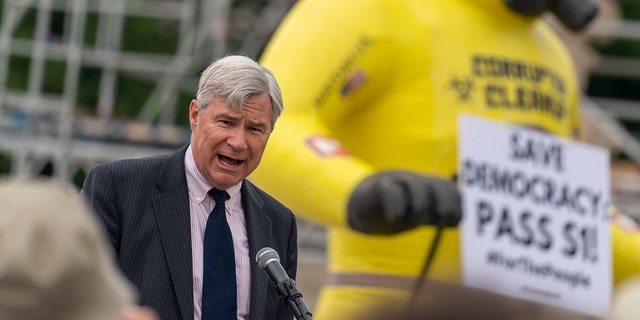 “It’s a long tradition in Rhode Island and there are many of them and we just need to work our way through the issues,” Whitehouse said.

In 2017, Whitehouse told GoLocalProv “it would be nice if the membership changed a little but it’s not my position.”

In response to a query on the senator’s comments from Fox News, Whitehouse Communications Director Richard Davidson said, “The club has no such restrictive policies. The club has had and has members of color.”

Bailey’s, according to a 2003 New York Times profile of the club, has been “long considered the queen of American resorts.”

The Times further reported that Bailey’s is “a world of emerald-barnacled dinosaurs attended by uniformed retainers and underwritten by ironclad fiduciary trusts” where “diversity… has made scant inroads.”

According to the paper, the biracial grandchildren of one member sometimes visited the resort, and it did allow Jewish members. But, according to one lifelong member quoted by The Times, Black people were “not really” welcome.

GoLocalProv, meanwhile, described Bailey’s as “the most exclusive club in America” and reported that the senator’s wife goes to the club on most days during the summer.

Whitehouse, one of the most vocal Democrats on the high-profile Senate Judiciary Committee, said on the anniversary of George Floyd’s death late last month that his committee is “working… to bring lasting change” on “racial injustice.”